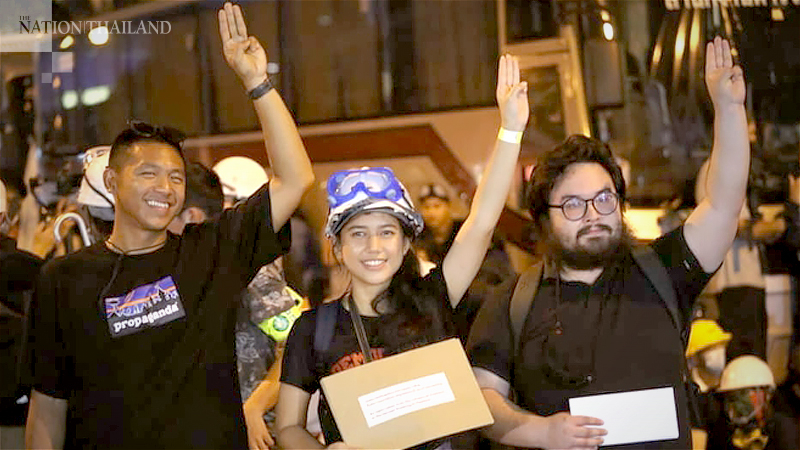 Pai, Passarawalee Thanakijwibulpol and Warin Patrick McBlain handed over letters to the ambassador asking Germany to investigate whether HM the King was conducting Thai affairs from German soil. Warin handed over a letter from Khana Ratsadon International, the overseas branch of the student-led pro-democracy movement.

Pai recounted the conversation with the ambassador on Monday evening after he and his two friends entered the embassy at around 7.40pm following a protest march from Sam Yan.

“What I said was that there will be no peace without justice, no justice without telling the truth, and no one can tell the truth without freedom of expression,” Pai posted on Facebook.

He said he went on to explain that when HM King X ascended the throne, the lese majeste law was enforced against people who had shared a BBC Thai news biography of the King – an act for which Pai himself was jailed. Then, the Computer Crimes Act was imposed to suppress freedom of expression. This year, Wanchalearm Satsaksit was forcibly disappeared, he noted, referring to the kidnapping of a Thai political dissident living in exile in Phnom Penh.

He said he told the ambassador that since October 13, the government had cracked down on protesters by arresting 80 people, including youths and one individual with a mental disorder.

“Now eight of our friends remain in the custody. We are being arrested because we want to reform the monarchy institution into a genuine constitutional monarchy,” said Pai, recounting the conversation with Schmidt.

He said he pointed out that Thailand’s state of emergency and special emergency decree violated basic rights – rights which are guaranteed by the German constitution.

Pai said the ambassador pledged to forward the letters to the German government or Parliament for further action. The ambassador also said that “talking is a good starting point”, Pai said.