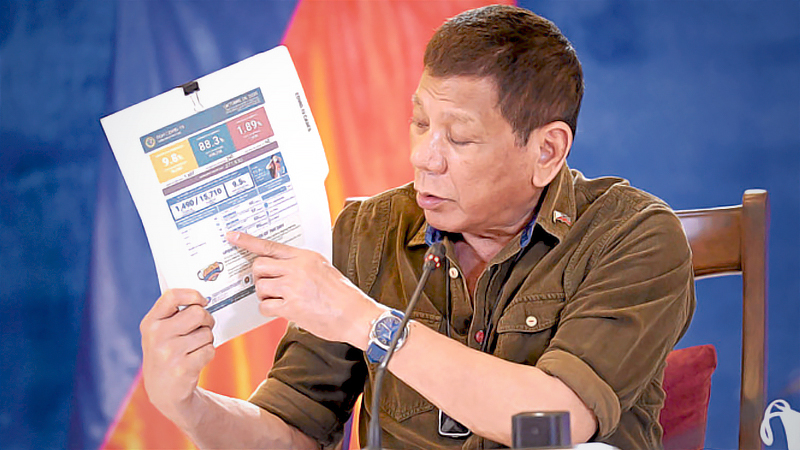 QUARANTINE RESTRICTIONS President Duterte presents figures showing the COVID-19 situation in the country during a meeting with members of the Inter-Agency Task Force for the Management of Emerging Infectious Diseases at Matina Enclaves in Davao City on Monday. He approved the recommendation of the task force to keep Metro Manila and six other areas under general community quarantine. —MALACAÑANG PHOTO

MANILA, Philippines — President Rodrigo Duterte on Monday approved the recommendation of the government’s coronavirus task force to keep Metro Manila and six other areas under general community quarantine until Nov. 30.

The cities of Bacolod, Iloilo, Tacloban and Iligan, as well as the provinces of Batangas and Lanao del Sur will also be under the same restrictions up to the end of November.

In a televised address on Tuesday morning, Duterte said the retention of the restrictions was subject to appeal from the concerned local governments.

In his daily press briefing on Tuesday, presidential spokesperson Harry Roque said Oct. 29 was the deadline for the appeal.

Earlier, the Metro Manila Council said the mayors of the metropolis favored keeping the region under general community quarantine until year-end to contain COVID-19, although with eased restrictions on mobility, transport and business.

With the announcement of the extension, Malacañang said no region in the country was subject to stricter quarantine levels in November.

Meanwhile, Duterte said he favored government-to-government transaction, most likely with China, for the purchase of vaccines for COVID-19 to avoid corruption.

The President said Chinese pharmaceutical companies had already developed a vaccine for the severe respiratory disease and it would just be a matter of how to purchase and distribute it.

He said Chinese Ambassador to the Philippines Huang Xilian also told him in a meeting that a vaccine was already available.

“He (Huang) said that the vaccine is there. It will be in a matter of … how to distribute it, and of course what kind of transaction would it be for them and for us,” he said.

In his briefing, Roque said he disagreed with the OCTA Research statement that easing restrictions on public transport would lead to a surge in coronavirus infections in Metro Manila in the next two weeks.

Roque said respected doctors consulted by the Inter-Agency Task Force for the Management of Emerging Infectious Diseases, the temporary government body overseeing the administration’s coronavirus response, believed otherwise as infection could be avoided if commuters observed the minimum health standards.

“We disagree with the research group. I think Filipinos will [do] everything they have to do because it is important that they can go to their jobs again,” he said.

Food and Drug Administration (FDA) chief Rolando Enrique Domingo said at Roque’s briefing that foreign pharmaceutical companies that had completed clinical trials overseas for their vaccines would not need to conduct trials in the Philippines.

Domingo said the pharmaceutical companies just needed to register their vaccines with the FDA and submit documents showing they had complied with Philippine and Southeast Asian standards.

He said only FDA-licensed manufacturers or importers may distribute COVID-19 vaccines in the Philippines.

The FDA, Domingo said, would also meet with the World Health Organization to set standards for an acceptable COVID-19 vaccine.

In an online briefing on Tuesday, Police Lt. Gen. Guillermo Eleazar, chief of law enforcement for the government’s coronavirus response, said new travel rules would be issued soon as local governments had been given the option to continue requiring travel authority of people who were not allowed to go out and who were not stranded due to lockdowns.

Eleazar said these people must first determine if the local governments in their destinations and in the places they would pass through were enforcing travel restrictions.

If there are no restrictions, then the travelers do not have to get authorization to travel, he said.