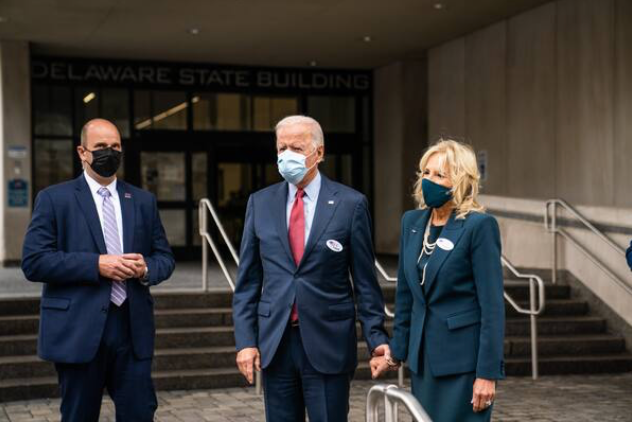 Joe Biden and his wife, Jill, exit a polling place after voting in Wilmington, Del. In the final days of the campaign, Biden and President Trump have crystallized opposing messages on the pandemic. MUST CREDIT: Washington Post photo by Demetrius Freeman

WASHINGTON - President Donald Trump pushed ahead Wednesday with a strategy for the closing days of the campaign that minimizes the threat from the coronavirus pandemic, misstates his record in confronting it and mocks Democratic nominee Joe Biden's caution in campaigning amid a disease that has killed more than 225,000 Americans.

Biden, during remarks in Delaware, blasted Trump for what he characterized as recklessness in handling the pandemic as Trump held crowded rallies in Arizona.

With five days to go before Election Day on Nov. 3, the two candidates have crystallized opposing messages on a pandemic that has affected most aspects of American life, including voting.

Biden holds small, carefully staged events where he typically wears a mask and asks attendees to stand far apart. He blames Trump for failing to check the spread of the virus and calls the election a referendum on Trump's leadership during the crisis.

Trump tells crowds that the pandemic is nearly over and that precautions such as school closures are themselves dangerous, while he assembles tens of thousands of people for political rallies despite mandates and public health advice against large gatherings.

"We're rounding the turn, regardless," Trump said near the start of remarks in Bullhead City, Ariz.

It is a message intended to project optimism not supported by science, as public health experts predict many more months of disruption. Trump is betting that his defiance and nonchalance - including about his own covid-19 diagnosis and hospitalization this month - will resonate with Americans fed up with pandemic restrictions.

"This election is a choice between a Trump boom and a Biden lockdown," Trump said in Arizona, a battleground state he carried four years ago but where recent polls show a competitive race.

People standing behind Trump mostly wore masks, as recommended by public health authorities, but many in the larger crowd in front of him did not. Trump mocked masks, saying the virus can easily penetrate some of them, and he ridiculed the recommendation by California Gov. Gavin Newsom, a Democrat, that people replace their masks between bites when dining out.

"And boy, you know, when you have spaghetti and meat sauce, that mask is not looking" good, Trump said to laughter.

Trump does not wear a mask when campaigning. He has also complained that the news media is intentionally trying to undermine him by focusing heavily on the pandemic.

"Covid, Covid, Covid is the unified chant of the Fake News Lamestream Media," he tweeted Wednesday. "They will talk about nothing else until November 4th., when the Election will be (hopefully!) over."

Meanwhile, a drop in the stock market threatens to cloud Trump's campaign message that he is delivering an economic recovery that will soon become a boom.

The Dow Jones industrial average fell 943 points Wednesday and is down nearly 9% since Sept. 2.

The sell-off that began two weeks ago has been triggered by a nationwide surge in new coronavirus cases and dimming prospects for an economic relief package in Congress.

Biden's running mate, Sen. Kamala Harris, D-Calif., also campaigned in Arizona on Wednesday, while Vice President Mike Pence went to Wisconsin and Michigan, two states Trump narrowly carried in 2016 but where Biden holds now leads in recent polls. Pence has been widely criticized by Democrats and public health experts for continuing to travel despite at least five people in his office testing positive for the novel coronavirus last week.

Trump campaigned in both Midwestern states Tuesday, where he mocked pandemic restrictions imposed by Democratic governors.

Biden leads Trump by nine percentage points nationally, 52% to 43%, according to a Washington Post average of national polls since Oct. 12.

The Biden campaign believes it is well-served by hammering the message that Trump has mishandled the pandemic and that his reelection would endanger the health care that Americans receive under the Affordable Care Act.

Biden on Wednesday lambasted what he called Trump's premature declaration of victory over the coronavirus, and he pledged to put in the hard work needed to "get our lives back a lot more quickly."

He promised that if elected, "we will deal honestly with the American people, and we'll never, ever, ever quit."

"That's how we'll shut down this virus so we can get back to our lives a lot more quickly than the pace we're going now," he said.

Biden pointed to the situation Tuesday night at the site of Trump's rally in Omaha, where hundreds of attendees waiting to depart on buses stood in the cold for hours as police scrambled to help those most at risk.

"Several folks ended up in the hospital," Biden said. "It's an image that captured President Trump's whole approach to this crisis."

The image Trump cared about - of a packed house cheering him on - had already happened, Biden suggested.

"He gets his photo op, and he gets out," Biden said. "He leaves everyone else to suffer the consequence of his failure to make a responsible plan. It seems like he just doesn't care much about it."

In the two weeks leading up to the election, Biden's schedule has been relatively sparse compared with Trump's. Biden on Monday visited one of his field offices in Chester, Pa., about 20 minutes from his home in Delaware, and on Tuesday traveled to Georgia to campaign in Warm Springs and Atlanta. On Wednesday he was back in Delaware, this time to meet with health experts advising him on covid-19.

Biden - who enjoys higher poll numbers on the question of who voters trust more to handle the pandemic - avoids shaking hands with supporters, opting instead to elbow bump if he comes close enough to them at all. He generally wears a mask, if not two, and at times has kept his mask on even while speaking from a lectern.

Social distancing is enforced at his rallies, sometimes with white circles drawn on the ground or spaced-out chairs. At a Florida car rally this week featuring former president Barack Obama, an announcer repeatedly reminded the crowd to stay within touching distance of their vehicles at all times.

"I don't like the idea of all this distance, but it's necessary," Biden said at his car rally Saturday in Bucks County, Pa., where he spoke to rows of vehicles and heard honks instead of applause. "What we don't want to do is become superspreaders."

The Biden campaign confirmed Wednesday that it is dispatching Harris to Texas - traditionally a Republican state that Trump carried by nine percentage points in 2016 - amid fresh signs of a tight race there this year.

The campaign said Harris would make three stops Friday - in Fort Worth, McAllen and Houston - marking the first visit to the state this cycle by a member of the Democratic ticket. Democratic lawmakers in Texas were notified this week that the trip was in the works.

Confirmation of Harris's plans coincided with a change in the state's rating Wednesday by the Cook Political Report from "Leans Republican" to "Toss Up." The publication noted Biden doesn't need to carry the state to prevail in the electoral college but said it is "clear that it's more competitive than ever."