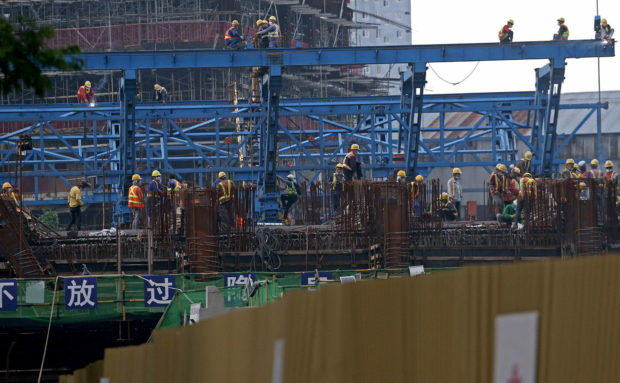 CHINESE PRESENCE Chinese workers help build the China-funded Estrella-Pantaleon bridge project to connect Mandaluyong and Makati cities. Sen. Francis “Kiko” Pangilinan is seeking a Senate investigation into the presence of 4 million Chinese nationals in the country since 2017, saying it has national security implications amid fears of an “orchestrated soft invasion” by China. —RICHARD A. REYES

MANILA, Philippines — The unhampered entry of millions of Chinese nationals into the Philippines may be the start of an “orchestrated soft invasion” by China, an opposition senator warned on Wednesday.

In a proposed resolution, Sen. Francis Pangilinan called for an inquiry into the “national security implications of the entry of around 4 million Chinese into the country since 2017.”

“It is worrying, especially considering we have issues [with China] in the West Philippine Sea,” he said.

The proposed inquiry in aid of legislation stemmed from the findings of a Senate committee that corrupt Bureau of Immigration (BI) officers had allowed the hitch-free entry of 4 million Chinese nationals since 2017 in exchange for billions of pesos in bribes through various rackets.

The moneymaking operations uncovered during hearings held by the committee on women, children, family relations and gender equality included the “pastillas” racket and the visa-upon-arrival (VUA) policy.

The panel chair, Sen. Risa Hontiveros, estimated that P40 billion had exchanged hands in these rackets.

“Given the lenient requirements for foreign national retirees and the seemingly unchecked entry of some 4 million Chinese nationals into the country, there is a need to look into whether this is an orchestrated ‘soft invasion’ of our country,” Pangilinan said in the proposed resolution he filed on Tuesday.

Soft invasion was the term used by Capt. Jim Fanell, former intelligence chief of the US Navy’s Pacific Fleet, to describe China’s strategy of “invading” its cash-strapped neighbors, especially the island nations in the region.

Fanell said in a November 2019 television interview that the Chinese were “coming in with soft power and lots of cash to buy out local officials, to gain access to ports and airfields, and resources that give them a controlling monopoly in the islands.”

Pangilinan noted that the hearings led by Hontiveros found that it was Department of Justice Order No. 41 issued by Justice Secretary Vitaliano Aguirre II in 2017 that paved the way for the virtually unhampered entry of Chinese nationals under the VUA policy.

Senators learned that of the 4 million Chinese who entered the country since 2017, 150,000 did so under the VUA.

Pangilinan also cited the recent disclosure by the Philippine Retirement Authority (PRA) that the Chinese comprised the biggest group of foreigners who had availed themselves of the special retirees residence visa (SRRV), which makes the Philippines their “second home” that they could freely enter anytime.

The PRA, an agency under the tourism department, said nearly 40 percent of the foreign retirees, or about 28,000, were Chinese. Many of them were as young as 35.

After Sen. Richard Gordon raised the alarm that retirees of “soldier’s age” could pose a national security problem, the PRA suspended issuing new SRRVs pending a review of the retirement program.

In his resolution, Pangilinan said China’s increased presence in the country was not limited to the millions of its nationals who had entered the Philippines since 2017.

“In July, the Philippine government protested the presence of more than a hundred Chinese vessels, which are believed to be part of China’s fishing militia, [at] Pag-asa Island and the West Philippine Sea,” he said.

“Filipino fishermen in the area who are civilians and have no military training, unlike their Chinese counterparts, are subjected to threats and harassment. Moreover, the country’s natural resources are exploited,” he added.

He said the government must not be tempted to sell out to China.

“The Philippines is for Filipinos. Some of our officials should not be blinded by money and exchange the Philippines for a few pieces of silver,” Pangilinan said.