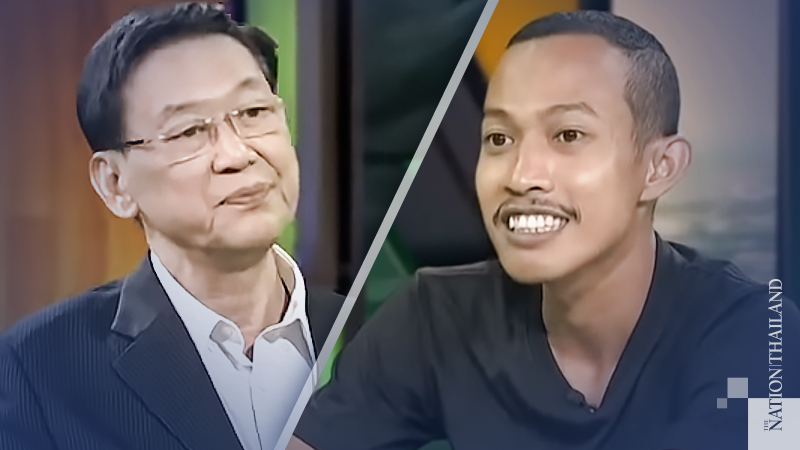 A Palang Pracharat party-list MP was mocked by pro-democracy protesters after he failed to address criticisms during a TV debate.

Party-list MP Paiboon Nititawan failed to address the lack of a party-list order during a debate on Thairath TV.

On Thursday, the ruling party MP was invited to a debate hosted by Jomquan Laopetch with a left-wing activist Nantapong Panmas, who had been arrested for his campaign to vote "no" in the referendum on the 2017 Constitution.

They began the debate with the issue of rewriting the charter and an iLaw draft to amend it according to the demands of the people. Paiboon, however, did not want to discuss the issue.

Nantapong said Palang Pracharat had no sincerity about making the amendment, but the protesters would continue to make their three demands: resignation of Prime Minister Prayut Chan-o-cha, rewriting of the charter and reform of the monarchy.

Nantapong recounted a period when Paiboon had joined a protest against the elected government of Yingluck Shinawatra, which led to a coup and paved the way for the junta's National Council for Peace and Order (NCPO) to seize power. In comparison, the anti-government protesters in 2020 were being subjected to violent crackdowns.

Paiboon, however, insisted that Palang Pracharat had come to power as it had more votes than the opposition parties, and therefore Prayut had to listen to those voices, not the pro-democracy ones.

Nantapong then raised the topic of the referendum on the 2017 Constitution. He said the NCPO tried to silence people who did not agree with the draft written by the military junta by arresting people who acknowledged the flaws in it, including Nantapong himself.

He later questioned why Paiboon had dissolved the People Reform Party to join the Palang Pracharat Party without having a clear order in the party-list. He also questioned the suspicious electoral system organised by the NCPO that allowed senators to have influence in electing the premier.

The MP called that a “nonsense claim” and harped on Palang Pracharat being the party with the most seats in Parliament.

The footage of the debate later went viral on the Internet among pro-democracy supporters who made fun of the suspicious process that had made him a Palang Pracharat MP.

Nantapong later posted a message on his Facebook account, saying he was told by Paiboon to be careful after the debate ended.