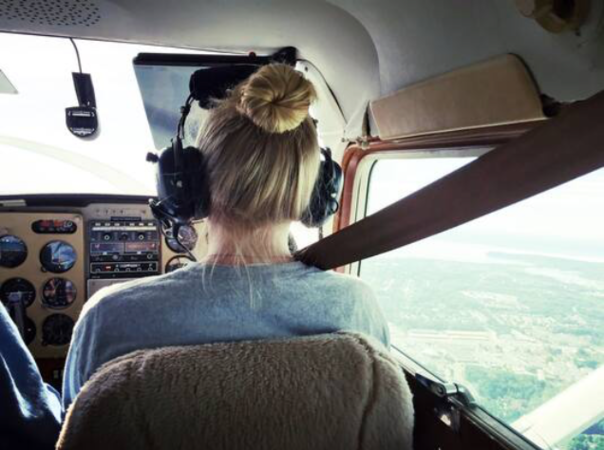 Alexandra Jackson flies a C-17 plane in the Kentmorr Airpark in Maryland. MUST CREDIT: Handout photo. Photo by: Handout — Handout

When Alexandra Jackson joined the West Virginia Air National Guard in 2018, she was looking forward to becoming a pilot with the 167th Airlift Wing, like her father. But at 5-foot-1, three inches shorter than the minimum standard, Jackson soon learned she would need a waiver to fly her unit's C-17 transport plane and one of the two trainer aircraft before that. 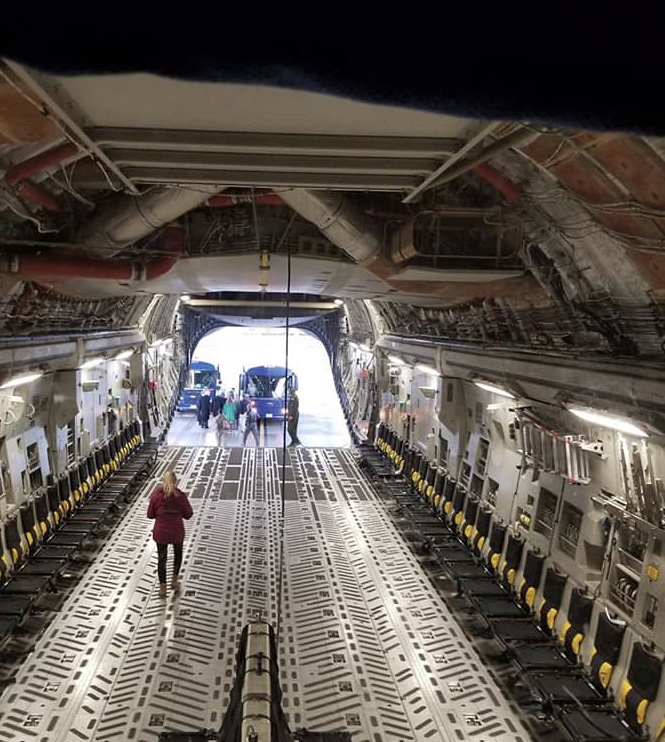 Jackson applied for the waivers but was denied. "It was heartbreaking, to say the least," she said.

She then sought a different exception that sometimes is granted if pilot candidates can pass a separate measurement exam conducted in the aircraft cockpit. Her superiors in the Air National Guard had never conducted such a test for the C-17 and had to work with Air Force officials to create one. She eventually passed and recently learned she can begin officer training school next year.

Jackson was elated but also frustrated by the delay. Had the cockpit been designed to accommodate a wider range of body sizes, she would be in the final stages of training, or perhaps already flying. "Hopefully I'm just paving the way for people to come," she said.

Now, the Air Force is discarding its decades-old height standards, which have disqualified nearly half of female candidates and had a particular impact on women of color. The new standards are part of an effort to eliminate often overlooked obstacles to the advancement of women in a service whose leadership and pilot corps are overwhelmingly male.

The plans, which are in development or beginning to take effect, also include the first-ever flight suit for pregnant aircrew and a design contest for devices that would allow female aircrew to more easily urinate in flight.

Service leaders say there is new urgency to securing a larger pool of qualified pilots and aircrew - a challenge that will require more eligible women - so the United States can compete with China's larger, quickly modernizing military.

Even as Pentagon leaders call for an end of racial and gender discrimination in the military following the upheaval that gripped the nation this summer, other barriers for female advancement persist across the Air Force and other services.

Those include a problematic record on responding to sexual harassment and assault; pregnancy bias, which a new Pentagon policy listed as a prohibited form of discrimination for the first time; and a host of smaller challenges that can make it harder for female service members to advance or that lead women to view military and family life as incompatible.

The military has taken significant steps toward eliminating the second-class status of female service members, such as opening ground combat positions to women, said Kayla Williams, an Army veteran who directs the Military, Veterans and Society Program at the Center for a New American Security.

Still, "having to consistently navigate a cultural environment full of implications that you do not belong and are unwanted is exhausting," she said. "Rooting out deeply entrenched cultural norms and stereotypes will be a longer-term effort, and one in which measuring success is challenging."

Women today make up about 16% of U.S. military personnel but occupy few positions among the upper echelons of the Pentagon's military and civilian workforce.

In the Air Force, a similar pattern is visible in coveted flight positions: Women account for five percent of pilots and just two percent of fighter pilots.

A recent government watchdog study found that women are more likely than men to leave the military early, with female service members saying their reasons include sexual aggression from other service members and the challenges of reconciling pregnancies and parenthood with career progression.

Advocates of additional changes say the military system remains designed with a male service member with a stay-at-home spouse in mind in ways large and small, from a leadership track centered on combat jobs to mandatory morning physical training, or "PT," which can be an issue for dual-military families with children.

Defense Secretary Mark Esper, who faced criticism for his role in the Trump administration's response to nationwide racial unrest this summer, ordered officials at all levels to take rapid steps to counteract racism and discrimination.

In the Air Force, the focus on equality provided traction for a proposal that the service's Women's Initiative Team (WIT), an internal volunteer group, had been working on for several years. The team hoped to press Air Force leaders to modernize body size regulations that determine who is eligible to fly in different kinds of aircraft and mandate that manufactures design aircraft for a broader array of body sizes and heights.

The so-called anthropometric standards, which dated to a survey of male pilots from 1967, have excluded 44% of the current U.S. female population aged 20 to 29 unless they obtain a waiver. Even with waivers, some aircraft were out of reach for most women. Only 9% of women, for example, qualified to fly the F-15 fighter jet.

The regulations had an even more pronounced effect on women of color, excluding 74% of African American women, 72% of Latino women and 61% of Asian American women in the recruitable population, Air Force officials said.

In a July 31 memo based on the WIT proposal, Will Roper, the service's top official for acquisition and technology, instructed Air Force leaders to ensure that new aircraft and equipment are designed to be usable by 95% of the current recruitable population. The memo was first reported by Air Force Times.

As an interim step until the Air Force can conduct further studies, the decision will expand the accepted range for standing height from 64-77 inches to 59-77 inches, and from 34-40 inches to 31-41 inches for sitting height. The range of accepted aircrew weights is also being adjusted, providing new opportunities for women who were previously deemed too light.

Officials say the situation has been even more difficult for enlisted Air Force personnel, who are rarely granted waivers. That reality has had unintended consequences, making it harder to fill spots for enlisted linguists who sit in the back of reconnaissance aircraft like the RC-135. Because some linguists, highly trained in languages like Mandarin, have been turned away for height reasons, the Air Force has had to lower language aptitude scores required for those jobs, a WIT member said.

Roper, who only recently became aware of the dated flight standards, said the Air Force grew complacent about the Pentagon's process for selecting aircrew because of its technological edge over other countries. He said the WIT's grass-roots drive to broaden the pilot candidate pool "just got stuck in the bureaucracy."

"I do think this was unintentional, but I think it's a case of a blind spot," Roper said in a recent interview. "It is the case of having an uphill slope for women to climb to the surface, because this is that silent bias in the background."

The changes are intended to apply, for the time being at least, to new and altered aircraft and equipment, a step Roper said would be negligible in cost. Aircraft like the F-35 stealth fighter can already accommodate 95% of the female recruitment population. But Roper said changes to aircraft that will be put out of service soon - or that require retesting other aircraft - probably won't make sense.

The Air Force is also developing a maternity flight suit, a year after it began allowing pregnant service members to fly non-fighter aircraft through their second trimester without a waiver. Before that change, women were grounded once they made their pregnancy known. Female airmen said the rule took some women out of flight duty for so long that they sometimes had to requalify on their aircraft, slowing their progression up the career ladder.

Air Force officials say they hope to deliver the maternity flight suit by 2023 and in the meantime are adjusting the service's existing design for pregnant aviators.

Lt. Col. Jess Ruttenber, a former KC-135 and C-21 pilot who has spearheaded a number of these initiatives as part of the WIT, said she had to improvise while pregnant by getting bigger flight suits. But the baggy arms and legs would catch on the flight controls.

She said many women hide their pregnancies for as long as possible because they think that it will negatively impact their careers. "Women often see having a flying career and having a family as incompatible," she said. The maternity flight suit, she said, "is important both functionally and symbolically that you can have children and be a pilot. It's essential to our sense of inclusion."

The Air Force has also launched an open challenge to solicit designs for a new device that would help women urinate more easily in flight. Female pilots currently have a few options, including special plastic bags filled with polymer that both women and men use.

But female pilots say their anatomy and the small zippers on many of their flight suits make it harder for them to use the bag to urinate. The process can take 10 minutes.

Many women choose instead to "tactically dehydrate," a practice that can erode pilot performance and increase the likelihood of developing bladder and urinary tract infections.

Lt. Col. Cathyrine Armandie, who flew 450 combat hours as an F-15E fighter pilot, said the extra challenge female pilots face is "a really big deal." On one flight mission, she went without relieving herself for 11 hours. Landing in the desert in over 100 degree heat, she almost passed out from dehydration.

Armandie, who now serves ina senior Air Force position related to diversity, said another device in use for in-flight urination, a mechanized pad and pump, doesn't always work as designed and can result in leaks.

"That's really nothing more humiliating than going out and fighting bad guys on combat sorties and protecting the guys on the ground - which is why I chose to fly that aircraft was to do ground support and make sure our troops on the ground had safety watch overhead - than to come back from a combat sortie and literally to have peed your pants," she said.

Winning designs in the competition, slated to conclude this fall, will receive up to $1.5 million from the Air Force.