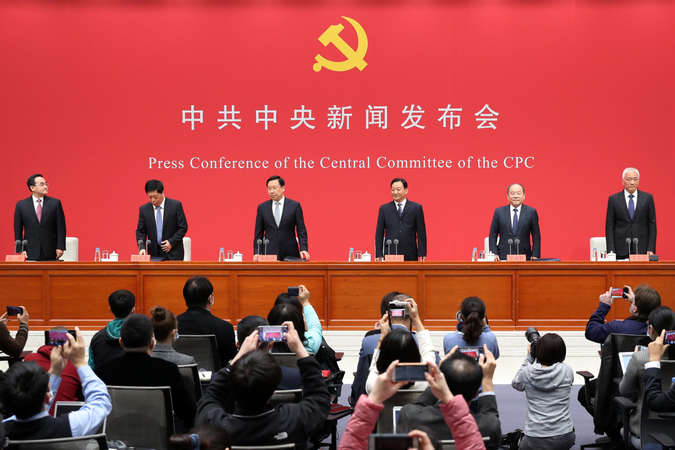 The Communist Party of China Central Committee holds a news conference to answer reporters' questions about the Fifth Plenary Session of the 19th CPC Central Committee on Friday. [Photo by Wang Zhuangfei/China Daily]

Complete decoupling between China and the United States is unrealistic, and also does no good to two nations or the rest of the world, a senior Communist Party of China official said on Friday.

Han Wenxiu, deputy head of the Office of the Central Commission for Financial and Economic Affairs, made the remark when talking about the guiding principles of the Fifth Plenary Session of the 19th CPC Central Committee at a news conference on Friday.

Economic links between China and the US, the world's two largest economies, are determined by the highly complementary nature of their economic structures and the openness of the global economy, Han said.

He cited the trade volume between the two countries in the third quarter, which was up by 16 percent year-on-year amid the fallout of the COVID-19 pandemic, adding that "only a small minority of people want decoupling, while those who pursue cooperation represent the overwhelming majority."

China will continue to uphold peace, development and win-win cooperation, unswervingly safeguarding multilateralism and standing firm on the right side of history, Han said.

He reaffirmed China's commitment to higher-level opening-up while stepping up the building of the nation's new development pattern of "dual circulation", which allows the domestic and international markets to complement each other with the domestic market as the mainstay.

Fostering the new development pattern will by no means affect the country's opening-up, Han said, adding that the scale of China's foreign trade, foreign capital usage and outbound investment will continue to expand.

The tone-setting Party meeting, which concluded on Thursday, adopted the CPC Central Committee's proposals for the formulation of the 14th Five-Year Plan (2021-25) for National Economic and Social Development and the Long-Range Objectives Through the Year 2035.

The session decided that in the next five years, starting in 2021, China will nurture a strong domestic market and speed up the formation of the new development pattern, according to a communique released after the Party meeting.

In the meanwhile, the country will pursue higher-level opening-up, promote international cooperation and explore new prospects for win-win results, the document said. It will also advance high-quality Belt and Road cooperation and actively participate in the reform of the global economic governance system.

China will widen market access for foreign enterprises and turn itself into a "gravitational field" that attracts the world's high-quality production factors and resources and a fertile ground for foreign investment by building a market-oriented, rule-based and international business environment, Han said.

"No matter how the international situation changes, we will never waver in our basic national policy of opening-up," he said. "China's opening-up will provide countries around the world with larger markets and more opportunities."

As a long-range objective, China will shape a new opening-up structure with substantial growth of the country's strengths in international economic cooperation and competition by 2035, according to Thursday's communique.

The communique mentioned the words of "reform" and "opening-up" more than 20 times, which sends a clear message to the world that China will stick to deepening reforms and expanding opening-up to enhance mutual benefits and win-win cooperation with other countries, Foreign Ministry spokesman Wang Wenbin said at a regular news conference on Friday.

John Ross, a former director of economic and business policy for the mayor of London and currently a senior fellow at the Chongyang Institute for Financial Studies at Renmin University of China, said China's new five-year plan has landmark significance for both itself and the rest of the world.

Ross said he believes China will remain committed to economic globalization, which is the best road for global development. He spoke in a recent online dialogue organized by the institute.

Growing foreign direct investment in China amid the pandemic and increasing international participation expected in the upcoming China International Import Expo in Shanghai demonstrate that China's new development pattern of "dual circulation" is the right move for development, Jones said.