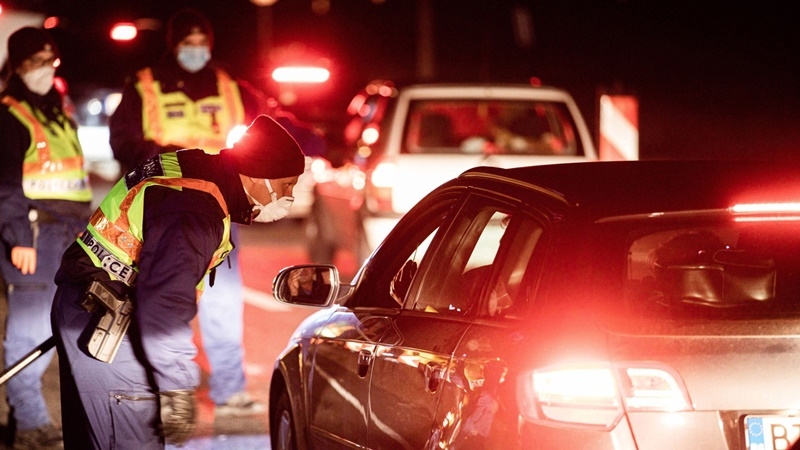 Police checks at a border crossing between Hungary and Austria, on March 17, 2020. MUST CREDIT: Bloomberg photo by Akos Stiller.

The leaders of seven eastern European countries who gathered in Bled, Slovenia, at the end of August were so certain they'd overcome the coronavirus that they staged a panel called "Europe after Brexit and Covid-19."

Less than two months later, that confidence has been shattered. Despite having beaten back the initial wave with some of Europe's fastest and strictest lockdowns, countries from the Baltic to the Black Sea are suffering an explosion of new cases. Their early advantage squandered, governments across the region are struggling with the same issues as their western counterparts -- or often worse.

Soaring death tolls and a spate of high-profile infections are eroding trust and feeding into a communist-era tradition of skirting rules, exacerbating the crisis. Field hospitals are popping up as the virus threatens to overwhelm health-care systems and measures that devastated economies this spring are returning.

"The coming months, quarters -- I hope it isn't years -- will be the toughest Poland has faced in decades," Polish Premier Mateusz Morawiecki told parliament last week.

Morawiecki was on stage at Bled along with leaders from the Czech Republic, Hungary, Bulgaria, Croatia, Serbia and Slovenia. Since then, coronavirus cases have more than tripled in Poland to exceed a quarter of a million on Monday. Deaths there more than doubled to 4,438, according to the World Health Organization.

And it's not even the region's worst-hit country. The Czechs now lead the European Union both in new cases and deaths per capita, followed by Hungary.

It didn't start that way. When Slovakia reported just five cases of the virus on March 9, its capital Bratislava closed elementary schools. Within a week, the Czechs shut schools and banned public gatherings, Hungary declared a state of emergency and Serbia postponed elections. All of that happened before France closed its schools, even though it had recorded more than 3,000 cases and 79 fatalities.

It was a textbook plan to fight a pandemic: eastern European governments shut borders, shops and factories and imposed social-distancing restrictions. With the virus raging in Italy, the U.S. and the U.K., newspaper headlines in the continent's former communist half declared sympathy while boasting of their countries' resilience and wisdom in following rules.

That resolve melted in the summer and millions went on holiday abroad as soon as borders reopened. Those who stayed home thronged beer gardens, mountain huts and national parks.

Hoping to rebuild after the lockdowns decimated economies and to save key industries such as tourism, politicians urged people to get back out and spend. Having opened the state's coffers to help businesses and furloughed workers, Czech Prime Minister Andrej Babis, Hungary's Viktor Orban and other leaders vowed that even if the virus returned, they'd avoid strict lockdowns.

Leaders in Western Europe are experiencing a similar sense of dismay. Italy and Spain, had sworn off any second lockdowns. Looking at the situation getting exponentially worse with their eastern neighbors, they too are coming to terms with the idea of whether they also declared victory too soon.

By mid-September, the number of new daily cases in the Czech Republic exceeded those in Germany, a country with almost eight times as many people. They did in Poland too, where President Andrzej Duda won a second term after his allies in the government had to postpone elections. He's now quarantining after testing positive for the disease.

Bulgarian Prime Minister Boyko Borissov -- another Bled attendee -- is also convalescing with covid-19, which is on track to kill as many people in his country in September and October as in the first six months of the pandemic combined.

Governments, however, are reluctant to return to the playbook that served them so well in the spring, or to tap into what the pandemic has taught the world in the past seven months.

Their mixed messaging, along with frequent rule-breaking by leaders, has spread public doubt about the effectiveness of restrictions. That's especially dangerous in a region where people spent decades circumventing official decrees under communist governments, according to Jan Hartl, chairman of the Prague-based researcher the STEM Institute.

"People in former communist countries perceive authorities differently than citizens in the West," he said. "They intuitively rebel against strict orders from the government since they intuitively consider them stupid. That's a heritage of totalitarianism."

Governments from Prague to Bucharest have tried to once again clamp down. Romanian Prime Minister Ludovic Orban resisted new measures before Sept. 27 local elections and a general ballot planned for Dec. 6 before finally giving in. Poland, the Czech Republic and Slovenia have closed schools and some non-essential businesses and vowed stricter measures if necessary.

But the message has yet to take hold. At the weekend, as Czech soldiers completed a 500-bed field hospital near a shopping mall in the Prague suburb of Letnany, images flooded media of throngs at a farmers' market in the city center.

"I appealed, begged, asked you here repeatedly, to follow the measures and to take pandemic seriously," he said. "Since no government can do it on its own, if we don't manage to flatten the growth together, our medical system will simply collapse."