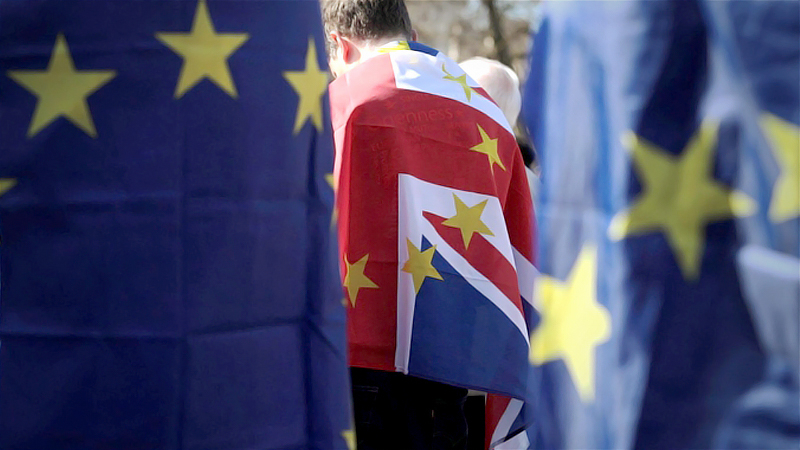 Protesters draped in European Union (EU) flags and a Union flag, also known as Union Jack, observe a minute of silence in memory of those who died in the Westminster terror attack, during a Unite for Europe march to protest Brexit in central London, on March 25, 2017. MUST CREDIT: Bloomberg photo by Luke MacGregor. /Photo by: Luke MacGregor — Bloomberg Location: London, United Kingdom

The threat of an acrimonious rupture between the U.K. and Europe hasn't gone away.

While Britain agreed on an orderly departure from the European Union on Jan. 31, 2020, averting the prospect of a "no-deal" Brexit, the second stage of the divorce hinges on forging a wider agreement encompassing trade, security cooperation and fisheries. If an accord isn't reached by Dec. 31, the risk that the split could turn chaotic intensifies.

1. Is that deadline real?

Yes. After Britain refused to seek an extension to the 11-month transition period, the country is set to complete its separation from the EU at the end of 2020. The bloc's chief negotiator, Michel Barnier, and his British counterpart, David Frost, have been locked in talks since March to secure a trade deal and deadlines for an agreement have come and gone. EU leaders, who have been focused on the coronavirus, could get more involved -- something that may be a double-edged sword for U.K. Prime Minister Boris Johnson. If the U.K. and EU were within touching distance of an accord, they could sign an outline agreement and set an implementation period -- a delay in all but name -- to work out details.

New and significant trade barriers between the U.K. and EU will come into force on Jan. 1 as they would default to trading on World Trade Organization terms -- meaning the return of tariffs and quotas where none exist today. A border will go up along the Channel, putting pressure on the English port of Dover and its French counterpart Calais, while major aspects of how the frontier between the U.K. and EU around Ireland will operate remain under discussion. Manufacturers will face higher costs and see supply chains disrupted, while the freight industry has warned of the risk of chaos at ports as trucks moving goods into the EU without the right paperwork are turned back. Service businesses would face substantial additional paperwork. In banking and securities trading, the U.K. and EU have rolled out contingency plans to avert financial chaos. But data-sharing across borders could be at risk. A Bloomberg Economics study said failure to reach a deal would lead to slower U.K. growth in 2021 and a hit to household incomes.

3. What are the contingency plans?

To try to avert chaos at Britain's borders, the U.K. government has backed down on plans to impose full controls at the start of 2021 in an attempt to help businesses already struggling with the coronavirus. For the first half of the year, most companies moving goods into Britain will be given additional time to file customs declarations and pay any tariffs due. But the rules won't apply to goods moving the other way -- the EU has declined to reciprocate. Without an agreement in place to recognize professional qualifications, services like architects and law firms would also suffer. But unlike 2019, Britain's bill for leaving the bloc has been settled and the rights of EU citizens broadly protected. Britons currently living in the EU member states will be able to stay and continue to work there.

4. What has been blocking a deal?

The two sides still disagree on two key issues: fisheries and the level playing field, a set of rules the EU says is necessary to stop Britain from trying to undercut the bloc's economy. The U.K. is resisting that demand on the grounds it would keep the country subject to the EU rules it seeks to escape. Johnson's controversial plan to rewrite the Brexit Withdrawal Agreement as it relates to Northern Ireland, attacked by all five of his living predecessors as U.K. prime minister because it breaches international law, also injected tension into the talks. EU officials say they are still waiting for the U.K. to shift after the bloc offered to make concessions. Unlike most of 2019, though, Johnson has a parliamentary majority of about 80 -- meaning his threats to walk away without a deal carry weight. But it's not only the EU that the prime minister has to worry about. U.S. President-elect Joe Biden warned Johnson in November that any future U.K.-U.S. trade deal would be contingent on preserving the peace process in Northern Ireland, a position shared by House Speaker Nancy Pelosi.

5. Didn't this almost happen before?

Yes. As the Brexit fight dragged on through 2019, there were stop-start preparations for a "no-deal" split. The U.K. had plans to turn the main highway to Dover into a holding zone for trucks. There were fears that bottlenecks could bring shortages of everything from fruit and vegetables to manufacturing components and vital medicines. Britain's "Operation Yellowhammer" plan for "no deal" -- named after a songbird -- was activated in October 2019. To maintain fuel supplies, officials put a fleet of 80 tankers on standby. Consumers and companies were stockpiling goods, from medicine and car parts to printing ink and alcohol. In September 2020, Cabinet Office Minister Michael Gove warned that as many as 70% of trucks traveling to the EU from Dover may not be ready for the new border controls, an assessment that could lead to queues of as many as 7,000 trucks in Kent in a "reasonable worst-case" scenario.

6. Has the pandemic changed anything?

Yes. It disrupted talks and compelled some meetings to take place by video instead of in person in Brussels and London. Both Barnier and Frost were forced into isolation in March after showing symptoms of the virus, and Johnson himself went into intensive care in April. It has also made governments and officials focus almost full-time on the pandemic, diverting resources away from Brexit. The EU, in particular, has been embroiled in tortuous negotiations to set up a giant fund to help the bloc's recovery from the virus. Covid-19 has made it harder for businesses to prepare because stockpiles have been run down and staff put on furlough. It has given both Britain and the EU a glimpse of what shut borders and broken supply chains look like. But it also means that if Britain does leave without an agreement, the economic costs and effects could be obscured by the much more extensive damage wreaked by the virus.