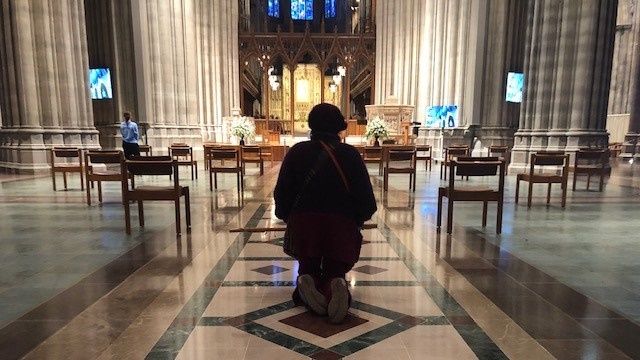 Maria Mercedes Bejarano, 73, walks on her knees in prayer up the aisle of Washington National Cathedral during a special four-hour vigil on the day after Election Day. The District of Columbia cathedral has otherwise been closed to the public since the spring due to the pandemic. MUST CREDIT: Washington Post photo by Michelle Boorstein

WASHINGTON - During the month before Christmas, Washington National Cathedral typically transforms into a sparkling, bustling destination with choral performances and a live Nativity. But since coronavirus shut its regular services to the public earlier this year, its staff has been transforming its massive sanctuary into a digitally attractive space, and they're having some success.

Like many houses of worship, the cathedral has seen a surge in online viewers, giving it even more national and global reach. On an average week, it has at least 6,000 people watch its Sunday service, sometimes twice the number that would fit in person. On any given Sunday morning, it will see people join from Ireland and Barbados. Its Easter service had 50,000 live views.

The burgeoning digital audience has also translated into an increase in online donations, which are up 260 percent this year. All that has eased somewhat the otherwise gaping loss - both spiritual and practical - created by the absence of in-person worshipers and visitors. Because the cathedral relies on outside groups to rent the space to support its staff and upkeep, it has taken a significant financial hit, facing a net $5 million shortfall in revenue and laying off 15 percent of its staff.

Christmas usually brings Washington National Cathedral its biggest foot traffic of the year, with families packing the nave for Messiah services and light shows with fake snow falling from 100-foot ceilings. This year, the only times its nave has been used for public use was for election prayer services, a handful of small weddings, school chapel services and funerals, as well as several American Red Cross blood drives. On Dec. 20, the cathedral will hold a virtual concert, and on Christmas Eve, it will hold an online nativity-themed service that will broadcast its animals from the Bishop's Garden on its grounds.

"It'll be more solitary and somber for many folks," said cathedral Dean Randolph Hollerith. "Online worship is no substitute for being in person, but there is power in gathering together in a virtual community."

The cathedral is the seat of the presiding bishop of the national Episcopal denomination, Michael Curry. Curry, who lives in North Carolina, typically visits the cathedral during the month leading up to Christmas, but he won't be traveling this year.

Curry said he has been stalling before finalizing his Christmas cards this year because he has been wrestling with how the holiday season is typically joyful. This time, he wants people to remember a Bible verse from John in the Gospels where he writes, "The light shines in the darkness, and the darkness has not overcome it."

"We don't pretend the darkness isn't real. People are dead, people are sick, we are fragmented and polarized. But the lightness shines in the darkness," he said. "That is a message of Christmas."

Many churches won't be adorned with poinsettias the same way this year, Curry said, but perhaps it's a chance for people to reflect on the core meaning of the holiday.

"The truth of Christmas may be more profoundly true for us because everything else has been stripped away," he said. "We are not helpless. We are not alone. There's a God that cares enough to come into this world."

Like many churches, the pandemic forced cathedral staff to make improvements in order to provide better online worship services, Hollerith said. Before the pandemic, the cathedral's sound system was so dated that it relied on a VHS player, a recording system requiring tape instead of digital formats. But the pandemic has forced the 127-year-old cathedral to rethink its future as a local, national and international institution beyond its flying buttresses.

Now they offer coffee hour Zoom calls for people joining nationally or internationally. Hollerith said that on Sundays when he watches from home, he is delighted to see the people commenting on YouTube or Facebook, saying hello to each other from around the world.

"Now we're going to need to pay as much attention and time and energy into the digital experience as we do the experience in person," he said.

Historically, the country's second-largest cathedral has played a central role in national ceremonies, including presidential inaugurations. Church officials plan to work with the incoming Biden administration, which is planning a scaled-back version.