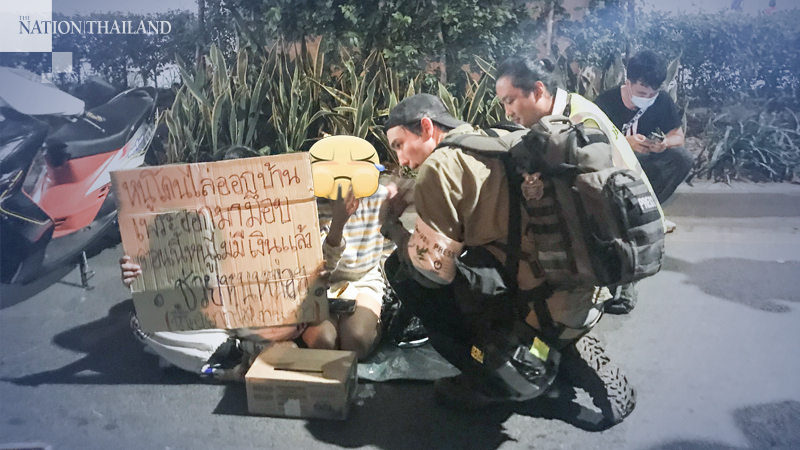 Two girls, who claim to have been thrown out of their homes for joining the anti-government demonstrations, ask for donations at the Lat Phrao protest site in Bangkok on Friday.

Two girls have been thrown out of their homes by parents opposed to their participating in anti-government protests.

The two students aged 21 asked for financial support at the protest site at the Lat Phrao intersection on Friday night.

Many people gave them cash and some offered to find them temporary jobs.

Sonia (her real full name and university name are withheld ) said she was kicked out of the home, as her parents strongly opposed her joining the rallies organised by youth-led protesters .

“I had to temporarily drop my studies as I ran out of money,” said the third-year student at a public university.

“My parents cut all channels of communication with me,” she added.

The other student, Mali (her full name is withheld), said she was in a similar predicament as she had run out of money after her parents boycotted her. She was kicked out of the home in October.

She is currently renting a room. She studies at a private-owned university.

Friction and conflicts in Thai families are not unusual, as the country has been facing deep political divisions and unrest.

Many parents are still trapped in their traditionally-held beliefs, but the new generation sees that as bowing to authoritarianism and is fighting for democracy.

Senior citizens in particular are upset when youth criticise the role of the monarchy, considered by many to be divine.

Many parents are also concerned about their children's safety, as police had used water cannons and tear gas to disperse demonstrations on October 16 and November 17. Police also filed lese-majeste and sedition charges, which carry penalties of several years in prison.

Youth-led protesters have called for the resignation of PM Prayut Chan-o-cha, rewriting of the 2017 Constitution and reform of the monarchy.

They organised a drill against a possible coup on Friday evening. Rumours of a military coup are running high, as protesters have intensified their activities and the government has resorted to the use of draconian laws in dealing with them.

Prayut, who led a military coup in 2014, has dismissed reports of a coup.