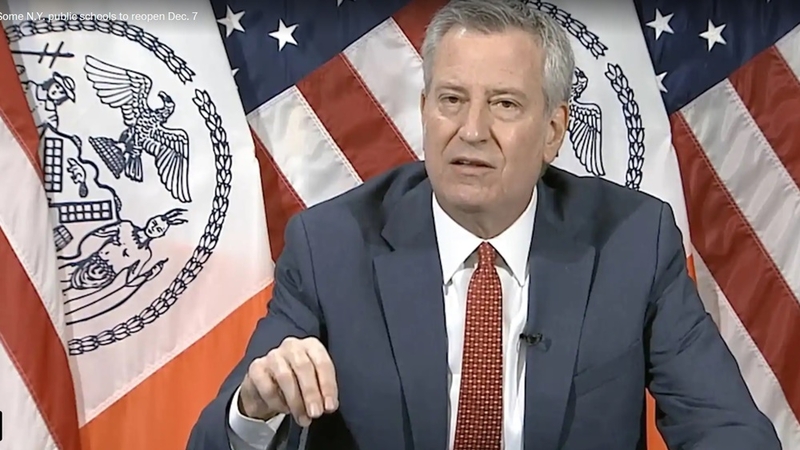 New York Mayor Bill de Blasio announced Sunday that he would begin to allow the city's youngest students and those with special needs to return to classrooms beginning next week, abandoning a previous plan that forced the entire school system to close 10 days ago and marking another disruption in an already challenging school year.

The move, which will be accompanied by ramped-up coronavirus testing, affects a small fraction of the more than 1 million public school students in New York City, home to by far the largest school system in the nation. About two-thirds of families there have opted for full-time virtual learning. Of those who have chosen the city's hybrid option, only pre-kindergarten through fifth-grade students, and special-education (District 75) students will be permitted to return. The mayor said he is pushing schools that have sufficient space to reopen five days a week.

"The need levels for District 75 and for younger kids - the need is even more intense to be there in school," said de Blasio, a Democrat. "We know that the health realities for the youngest kids are the most favorable."

Schools across the country are facing several competing pressures as they weigh whether to reopen schools or keep them closed. Besides New York City, the entire state of Kentucky has ordered school closures amid rising coronavirus infection numbers. But there is also a growing body of evidence that young people can safely return to classrooms without increasing community spread if they wear masks, maintain social distance and have good ventilation, among other things. Concerns abound, too, about the danger to the health, welfare and academic progress school closures pose for vulnerable students.

De Blasio's announcement comes 10 days after he closed city schools in response to seven-day average positivity rates rising to 3%, the threshold he had set to shutter the school system. The move angered some parents, who were frustrated that bars, restaurants and gyms remained open.

The mayor said the first couple of months of in-person school had been instructive, and that even with weekly positivity rates at 3%, he was confident that he could keep schools open for younger students - who appear less likely to contract and spread the virus. The city's randomized testing program, which tested a sample of students and staffers in each school building, found a small number of cases - less than one-half of 1% of in-person students and staffers in the city.

"We proved that schools could be extraordinarily safe because we put tremendous health and safety measures in place," de Blasio said. "It's a new approach because we have so much proof now of how safe schools can be and this has come from real life experience in the biggest school system in America."

Gov. Andrew Cuomo, a Democrat who has sparred with the mayor over school closures, said in a teleconference Sunday that he supported de Blasio's move. Given the low rates of coronavirus found in schools, he said, "it's literally safer for a child and a teacher to be in the school than in the community."

The city once was the epicenter of the pandemic, the disease covid-19 spreading quickly through densely populated working-class neighborhoods. It has killed more than 24,000 New Yorkers and left many more traumatized. At the start of the school year, about half of families chose the city's hybrid-learning option, in which children would learn in classrooms some days and would take online classes the rest of the time. The other half opted for the fully remote option, with disproportionate numbers of students from Black and Latino neighborhoods - where the virus hit hardest - steering clear of in-person schools.

The city allowed families to opt out of in-person learning at any time, and many families have since taken advantage of that option. Miranda Barbot, a spokeswoman for the mayor, said the number of students in remote learning remains in flux, and estimated that about 300,000 students had chosen the hybrid model before school closed in mid-November. About 35,000 have opted into hybrid learning for December.

The mayor also announced Sunday that the city would adjust its approach to keeping the virus at bay in city schools. He said he plans to deploy weekly, instead of monthly, randomized testing, and he said children who did not have consent forms to be tested would not be permitted to return to class. While he would no longer shut down the city's school system when positivity rates reached 3%, he planned to continue to abide by the state's testing requirements, which require increased monitoring for schools that reopen in areas of the city where positivity rates are especially high.

"We are supportive of a phased reopening of schools in other neighborhoods as long as stringent testing is in place. This strategy - properly implemented - will allow us to offer safe in-person instruction to the maximum number of students until we beat the pandemic," said Michael Mulgrew, president of the United Federation of Teachers