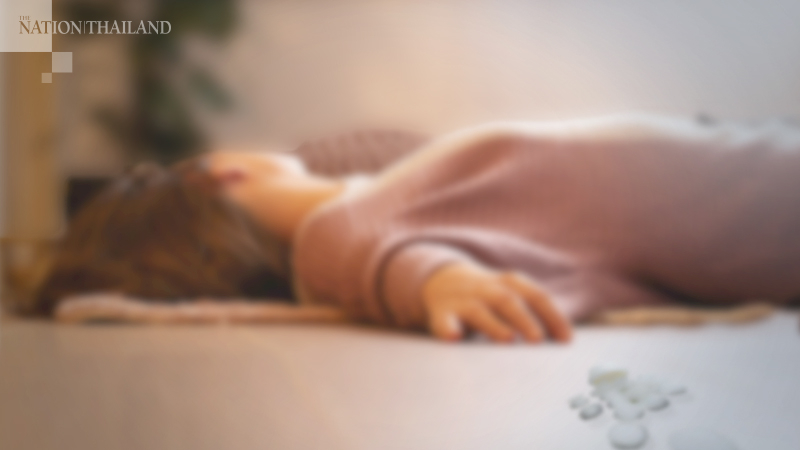 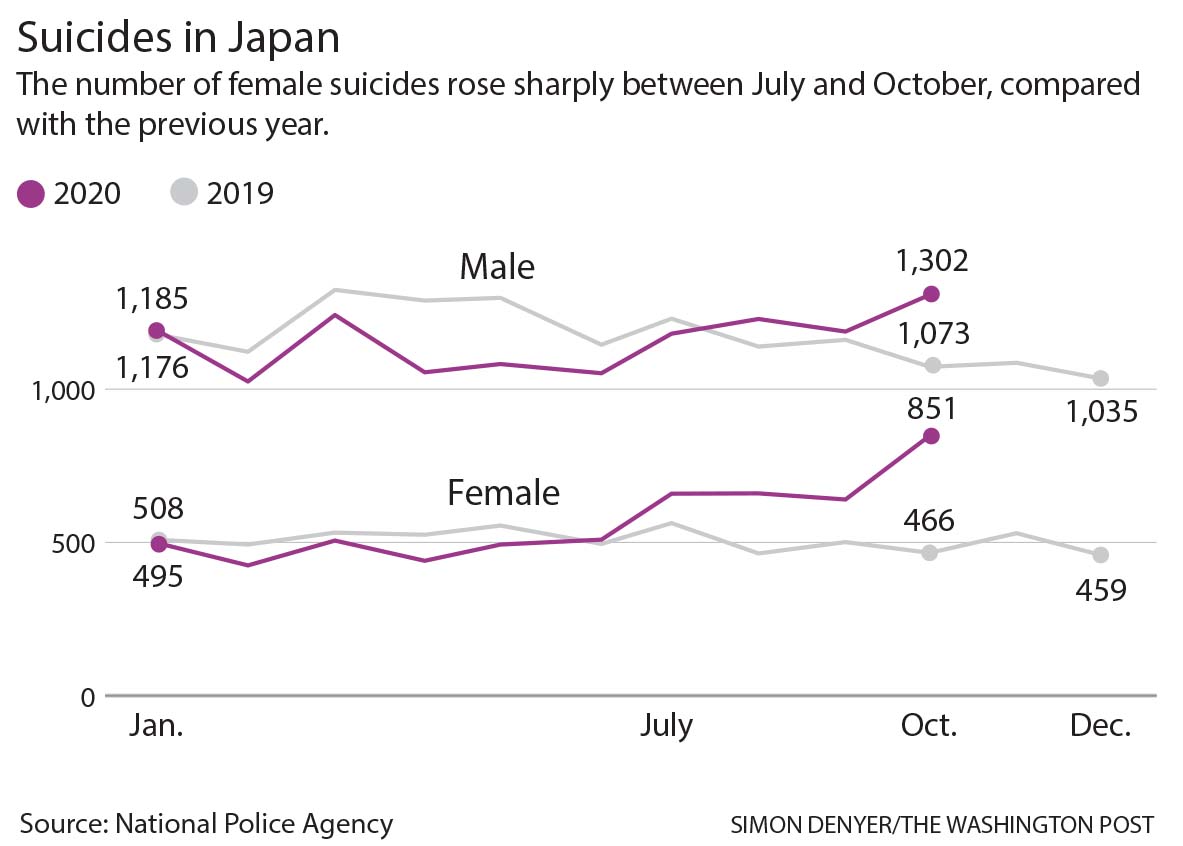 No comprehensive global studies are yet available on whether the pandemic has caused higher suicide numbers or how it may have affected different age groups and genders.

But Japan and South Korea are among the few countries to issue current data on suicides, with most countries taking a year or two to issue their numbers. Experts worry that the emerging trends in the two countries could be an early warning for the rest of the world as the pandemic and lockdowns take a toll on mental health.

Research conducted by the U.S. Centers for Disease Control and Prevention in the summer found that 1 in 10 respondents had seriously considered suicide the previous month, twice the rate observed in 2018. The rate among those 18-24 years old in the survey was 1 in 4, the CDC reported. There is also some evidence that the rate of suicides among U.S. military personnel has risen.

In Britain, a study issued in October by British Journal of Psychiatry found that thoughts of suicide had increased during the first six weeks of lockdown, with women and young adults the worst affected.

The total number of suicides in Japan rose to 2,153 in October, the highest monthly count in more than five years, with the greater increase among women, according to government statistics. Between July and October, at least 2,810 Japanese women took their own lives, nearly 41 percent more than the 1,994 who died by suicide in the same period last year, the reports showed. Preliminary data by age group shows the sharpest rises in people younger than 29. 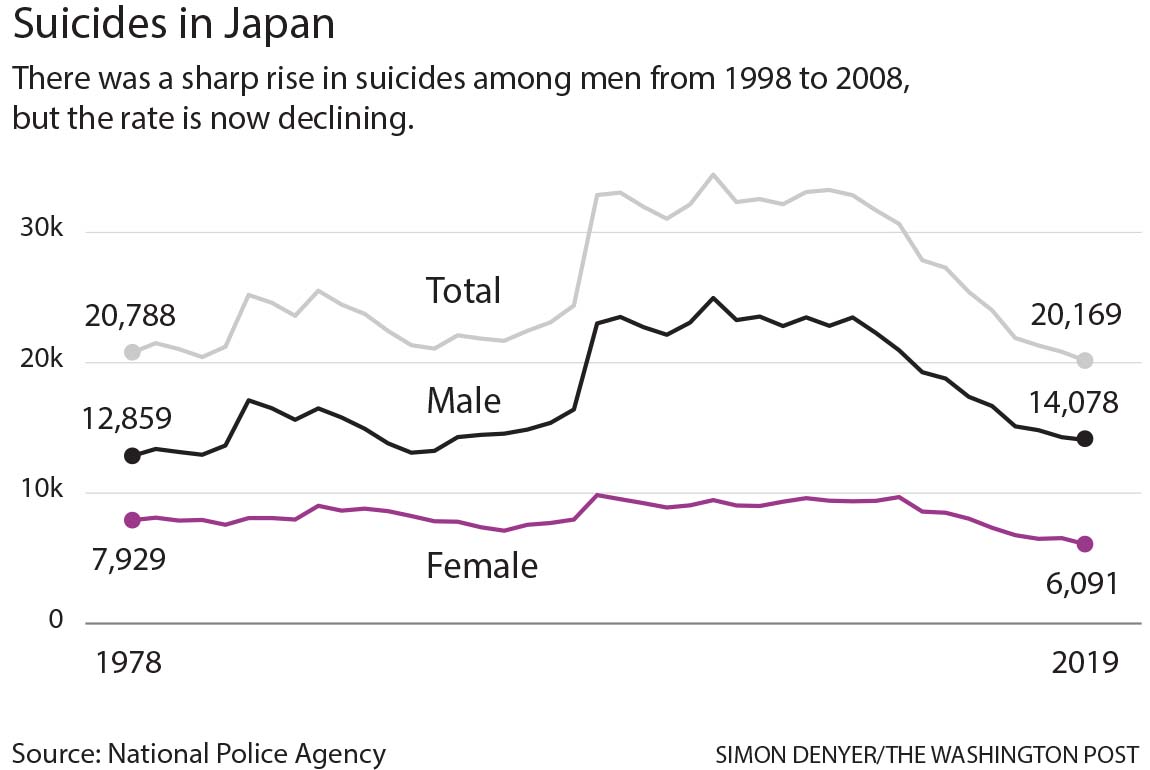 Japan already has the highest rate of suicide among the Group of Seven industrialized nations - just ahead of the United States - and is the only country among the seven where suicide is the leading cause of death among 15- to 34-year-olds, the Ministry of Health reported.

South Korea has a higher suicide rate than Japan, with deaths by suicide peaking at nearly 16,000 in 2011, the highest per capita rate among industrialized nations. While the overall numbers show a decline in suicides this year, there has been a 43 percent increase in suicides by women in their 20s in the first half of 2020 compared with the same period last year.

In Japan, teenagers and young women have flooded suicide helplines and have called for help on Twitter and in online forums, according to social service groups.

Yuki Nishimura of the Japanese Association of Mental Health Services said the chance of a caller's getting through to its hotline is only about 40 percent, and although it is adding counselors, demand also is rising rapidly.

Jiro Ito, the head of OVA, a nonprofit group trying to prevent suicide, said the people reaching his group's helpline tend to have one thing in common: loneliness.

"Under coronavirus, we have less communication and fewer chances to talk to people," he said.

Men accounted for 70 percent of the 20,169 suicides in Japan last year.

Historically, suicide was seen in Japan as a way to escape shame and dishonor, while seeking psychological help was stigmatized. There was a rise in suicides among middle-aged men in the late 1990s as the bursting of Japan's economic bubble caused a rise in unemployment, but the rate fell back as the economy recovered in the past decade.

Waseda University professor Michiko Ueda, who studies suicidology and suicide prevention, said that the cause of the rise in female suicides this year is not yet clear but economic factors are likely to have played a role.

"The industries that have been particularly hit by covid have been in the travel, retail, food and restaurant businesses," she said, noting they tend to employ many women, often in contract positions. "A lot of women have lost their jobs or have experienced a large decline in income."

Japan never imposed the sweeping lockdowns seen in many other parts of the world, largely relying on mask-wearing, hand-washing and avoidance of indoor crowding to keep the virus relatively under control.

Still, schools across the country were closed between March and May, and most people worked from home during a state of emergency in April and May.

Although the streets and commuter trains are busier now, life is far from being back to normal. Many people are struggling to keep their businesses afloat, some are still working from home or socializing less often, and universities have switched to online learning.

Ironically, there was a sharp drop in suicides during the state of emergency, something that is not unheard of. "During a period of crisis, people tend to think about their own survival, so they don't think about killing themselves," Ueda said.

But as the summer arrived and people went back to a "semi-normal life," the stresses seemed to return. Ueno said her surveys of Twitter traffic and online forums showed levels of psychological distress rising from July.

The Bond Project, another nonprofit organization working to help young women, conducted a survey in June of nearly 1,000 people who had contacted the program for help in the past. About 3 in 4 gave responses that included feeling unmotivated or wanting to "disappear and die."

Others said they were lonely or could not sleep.

"Many of those who reach us say they have no place to go when they're told to stay home," said Jun Tachibana of Bond Project. "Many are having problems with their family, friends or boyfriends. I worry they may be feeling more lonely."

In South Korea, suicides in the capital, Seoul, have increased by 4.8 percent in the first half of the year, also led by young women.

The city's suicide prevention hotline has logged a record number of calls since the pandemic began, said Joo Ji-young, deputy head of the Seoul Suicide Prevention Center, while the number of people admitted to emergency rooms for attempted suicide nationally rose 10 percent in the first eight months of the year, the Health Ministry said. Women in their 20s accounted for a third of those attempts.

"An inevitable side effect of social distancing is the alienating 'psychological distance' between people," Joo said.

The Korea Suicide Prevention Center's director, Paik Jong-woo, said a lack of human connection is a threat to everyone's mental health, "but women are often faced with extra burdens of greater job insecurity compared to men, and of caring for school-aged children at home."

But a separate factor that could be fueling the rise in suicides in Japan and South Korea: a number of celebrities, including actors and K-pop stars, have taken their own lives in both countries in the past year. Celebrity suicides often fuel despair among ordinary people, and tend to push suicide rates higher, experts say.