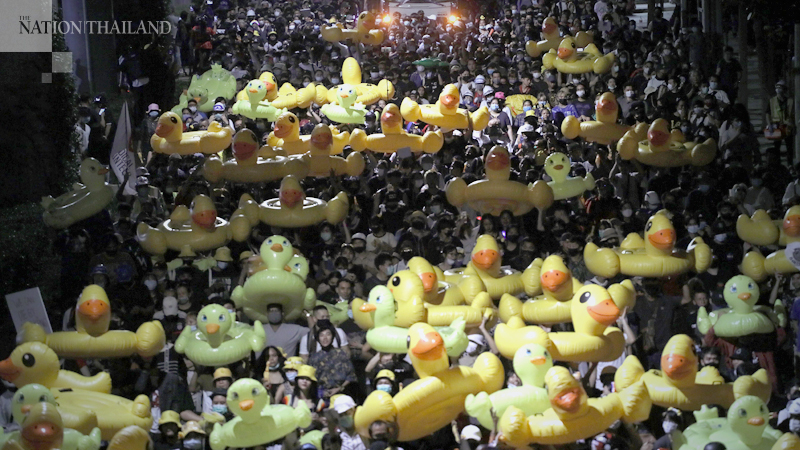 Anti-establishment demonstrators of the “Ratsadon” group announced at their rally on Sunday at the 11th Infantry Regiment base that their next rally would be held in front of the Constitution Court in Bangkok’s Lak Si district on Wednesday.

On that day, the court will read the verdict in a case against Prime Minister General Prayut Chan-o-cha of breaking Army rules by living in a military house after his retirement.

Former Army chief General Apirat Kongsompong had said that Prayut and Deputy Prime Minister Prawit Wongsuwan, both retired generals, were exempted because of their significant contributions to the country’s well-being.

The rally on Sunday started at around 4pm. Protesters marched from BTS Wat Phra Sri Mahathat station to the 11th Infantry Regiment base in Bangkok’s Bang Khen district, demanding the return of the military unit to the Defence Ministry. The regiment, along with the 1st Infantry Regiment base, was transferred to Palace control under Prime Minister Prayut Chan-o-cha’s administration.

“On Wednesday, we will gather as many people as possible at the court to witness the reading of the verdict and to find out whether or not the Constitution Court is capable of delivering justice to the people,” said

“The verdict reading will start at 3pm and we will gather there starting from two. I will also be there.”

Protesters announced the end of their Sunday rally at 10.15pm, then peacefully dispersed.