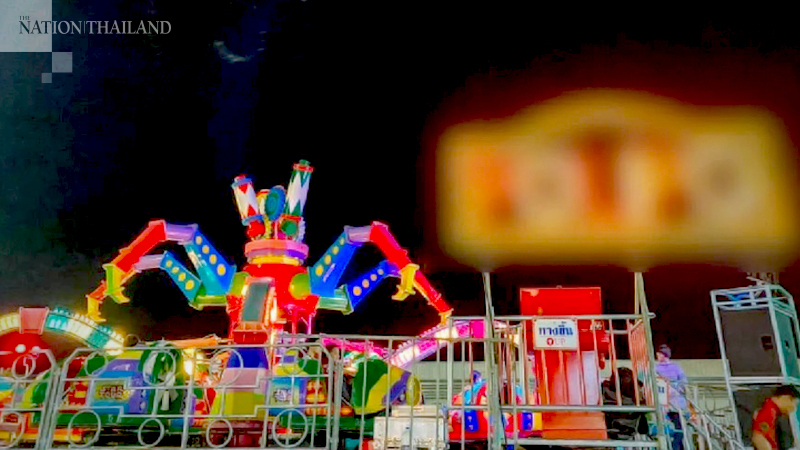 The organiser of the Hua Hin Red Cross Festival in Prachuap Khiri Khan province has clarified that there was no fatality from a malfunctioning ride on Friday but a hydraulic system failure had left three children injured.

On Sunday the organiser, Pannee Klomtheri, invited members of the press to visit the theme park located in front of Bluport Department Store to clarify the incident where a ride had malfunctioned on Friday night and injured young riders.

A Facebook user named Yaniz Phookpan had posted a picture of a giant octopus ride at the theme park on Friday and said that a ride had malfunctioned and tilted down, causing at least one death.

“The incident took place at around 10pm on Friday night. The hydraulic system of the giant octopus ride malfunctioned when about 10 children were riding it,” said Pannee.

“Three children were injured and were sent to Bangkok Hua Hin Hospital with some bruises. Doctors said all the kids are now fine. There was no death caused by the incident.”

Pannee added that the giant octopus and nearby rides would be closed until the fair ends, while officers from Hua Hin Municipality would later visit the site for inspection. “The repair is expected to take several days as the parts must be imported,” she said.

Meanwhile, Hua Hin mayor Nopphon Wutthikul has said that the organiser had submitted incomplete documents to the authority when applying for permit to operate a temporary theme park.

“Preliminary inspection revealed that they had yet to submit safety certification signed by licensed engineers from related government agencies. We will further investigate this matter to find out if there was misconduct by any official,” he said.

The theme park opened on November 27 and closes on December 6.