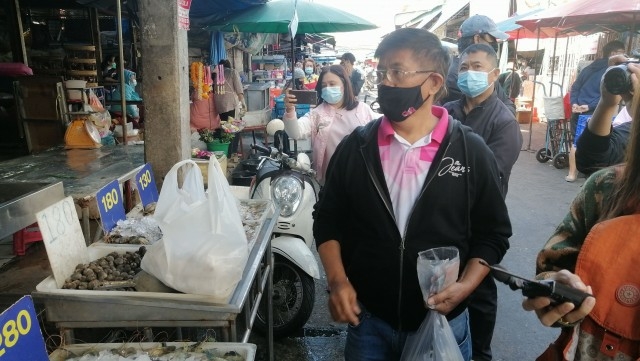 The sale of seafood in Chiang Mai’s Muang Mai market is reportedly suffering after there was an explosion of Covid-19 cases in Samut Sakhon’s stemming from one of its main shrimp markets.

Muang Mai is the largest seafood market in Chiang Mai, and many vendors said on Tuesday morning that their sales had dropped sharply after news of the virus broke out.

Vendor Payong Wanamkang said his sales has fallen by 20 to 30 per cent, adding that his employees, who are migrant workers, wear gloves and face masks at all times.

Other vendors have also put up signs saying their seafood does not originate from Samut Sakhon in a bid to convince customers.

As of Tuesday, 427 new cases were detected, 397 of whom were migrant workers, which took the total number of cases in the latest outbreak above 1,000.

The rate of positive results has improved from 40 per cent three days ago to 27.91 per cent on Tuesday.