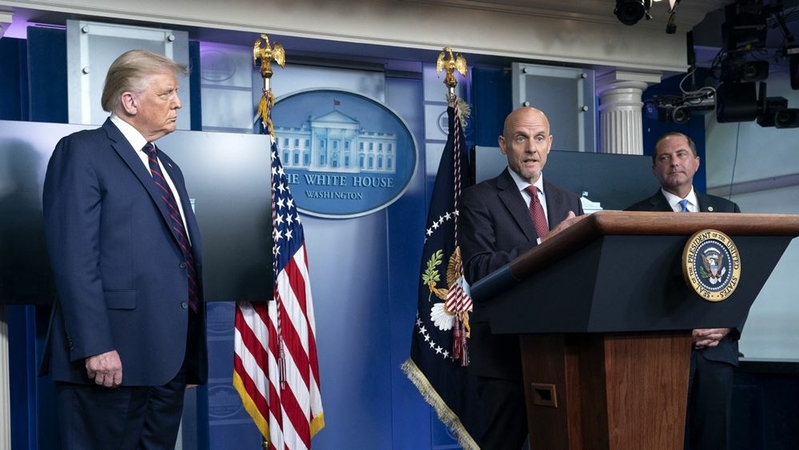 Convalescent plasma, a soup of immune factors derived from the blood of recovered covid-19 patients, had shown "an incredible rate of success" and would "save countless lives," Trump said Aug 23. Yet more than four months later and with more than 330,000 U.S. coronavirus deaths reported since the pandemic began, the jury is still out how much the treatment benefits patients, if at all.

It wasn't the first or last time that Trump was to promote a therapy for covid-19 based on skimpy data. His faith in since-discredited hydroxychloroquine is well known, and he proclaimed Regeneron Pharmaceuticals Inc.'s antibody cocktail a wonder drug after receiving it to treat his infection in October. Now, as vaccines developed to slow the pandemic begin their roll-out, the saga of convalescent plasma highlights the lack of effective treatments for the killer virus.

As the pandemic consumed thousands of lives around the world, the FDA authorized the use of promising drugs with only early evidence to go on. From Gilead Sciences's remdesivir to antibody treatments like Regeneron's, drugs for covid-19 that were cleared to great fanfare have failed to gain backing from top scientists and infectious disease groups.

Convalescent plasma is supported by one of the fuzzier datasets, and just days after Trump's August victory lap, Food and Drug Administration Commissioner Hahn began walking back remarks that exaggerated its effectiveness. National Institutes of Health advisers who compile covid-19 treatment guidelines said in September that there wasn't enough evidence convalescent plasma works to recommend its use against the virus.

Data continues to support the FDA's emergency authorization, Stephanie Caccomo, a spokeswoman, said in an email. The agency in September posted evidence that it said backs the use of convalescent plasma.

While one trial cited by the agency indicated a significant help to patients, others "tended to indicate a modest benefit." The FDA acknowledged that the studies were less rigorous scientifically than it normally requires to prove efficacy.

The White House didn't respond to a request for comment.

More than 100,000 people in the U.S. have already been treated with convalescent plasma. That includes a nationwide Mayo Clinic program that infused more than 90,000 people before the FDA's emergency authorization.

Clinical trials that were supposed to clear up any doubts about the treatment were expected to read out in September or October, just a month or two after the FDA cleared it for emergency use. Those data have yet to appear, but the raging U.S. outbreak should soon serve to enroll more patients in those studies.

Still, the effect is likely to be much more modest than Trump or Hahn originally claimed, experts said.

"It became evident in most people, even when it works, it's not a Lazarus thing," said Christopher Austin, director of the NIH's National Center on Advancing Translational Sciences. "The effect was going to be smaller."

The center is leading or involved in key clinical trials that will finally offer insight into convalescent plasma's efficacy more than 100 years after it began being deployed during pandemics. The rationale behind the treatment is that the antibodies people develop after enduring a disease will help newly diagnosed patients recover.

Trials could produce critical data in January or February, Austin said, at least for a potential subset of people who respond to the therapy. Patients who receive convalescent plasma with a high level of antibodies early in their disease course appear to fare better. But whether certain age, race or gender groups are more likely to respond is still unknown.

Andrea Troxel, director of the Division of Biostatistics at New York University School of Medicine, is hoping to soon have answers as well. Troxel is the principal investigator of an effort to combine data from eight trials of convalescent plasma around the world. Among them is an NIH-sponsored trial at NYU Langone Health as well as studies in India, Spain, Belgium, and other countries.

Austin and Troxel are keeping in close touch with the FDA, which could possibly narrow its emergency authorization for the therapy based on what the studies reveal.

It's part of a familiar pattern for covid-19 drugs touted by Trump. For example, the government has distributed hundreds of thousands of antibody therapies from Regeneron and Eli Lilly & Co. to hospitals around the country, but uptake has been minimal. Only 5% to 20% of the antibody treatments were being used, Moncef Slaoui, chief scientific adviser to the Operation Warp Speed drug and vaccine accelerator, said earlier this month.

Like convalescent plasma, antibody therapies are hoped to work best when used early to prevent high-risk patients from worsening. They must be infused typically in a hospital setting, which can be a tough sell for people who don't feel very ill.

"If you're a rural hospital in Africa, you can give convalescent plasma," he said. "You don't need a supply chain, storage or a pharmacy. Heaven knows we need things like that, and we have areas like that in this country too."

And drugs with even a potentially modest benefit can be helpful against the virus "both in terms of hospitalization and what we're learning about its long-term effects," said Megan Ranney, an emergency physician and associate professor at Brown University. The danger lies in over-promising, she said.

"There is no magic pill that you can take and suddenly avoid all the horrible effects of covid," Ranney said. Implying otherwise is "dangerous because it gives people a false sense of assurance."