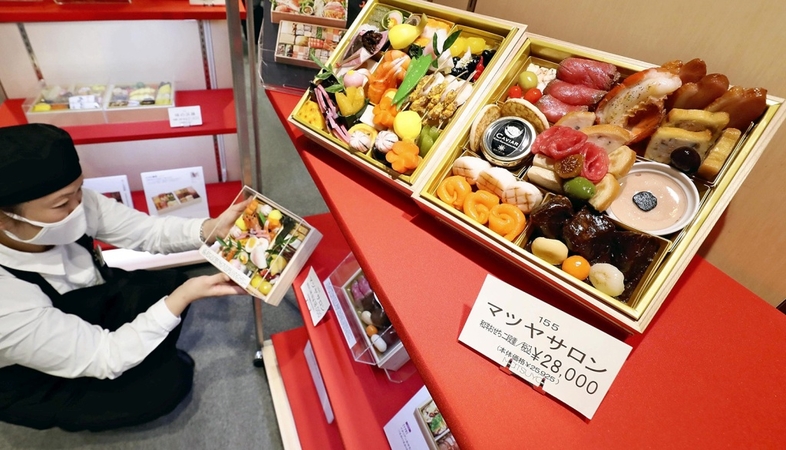 By The Japan News-Yomiuri · Ayaka Higuchi

As with almost every aspect of life, people are adapting how they spend the year-end and New Year holidays to the COVID-19 pandemic.

While trips to hometowns or holiday destinations are out, the propensity to stay at home in the past year had sales of deluxe sets of New Year delicacies selling well.

And New Year's cards are once again back in vogue as a means of sending well-wishes to friends and family who the senders won't be seeing anytime soon.

Sho Koizumi, the sales manager for New Year's osechi sets of delicacies at Matsuya Ginza department store in Chuo Ward, Tokyo, couldn't hide his surprise. "We get many inquiries, but we have nothing left to sell," said Koizumi, 34. "It's never been like this."

The department store started taking preorders for 197 different types of osechi sets back in October. The reservations started flooding in immediately, at a rate three times the average. By Dec. 24, almost everything was sold out.

Most notable were deluxe sets priced at 60,000 yen (about $582), as well as individual boxes that make it unnecessary to share from a communal dish, and gift sets that can be sent anywhere in the country.

"In place of heading to their hometowns or taking a trip, I suppose there are many people who are opting for some luxury in their osechi sets," Koizumi said.

With many people putting off returning to their hometown, New Year's cards are under the spotlight. Alpha Print Service Co., a printing company in Taito Ward, Tokyo, received 1.5 times more orders in 2020 for printing New Year's cards.

Designs and phrases related to the coronavirus are popular and were used for 70% of the orders. These include illustrations of Amabie, a yokai spirit, and Akabeko, the lucky cow of Fukushima Prefecture, both of which are traditionally believed to fend off disease.

"For those who were unable to go home even during the Bon holiday period [in summer], not sending New Year's cards as well would be a shame," said Tsutomu Miyashita, 50, the company's president. "Since the virus has reduced chances for people to get together, people are rethinking the value of New Year's cards."

Moves to stagger the period for New Year visits to shrines and temples are spreading as well.

Meiji Jingu shrine in Shibuya Ward, Tokyo, normally draws 3 million people over the first three days of January. For the New Year holidays, however, the shrine will bar worshipers from coming throughout the night to ring in the new year. It was to close its gate at 4 p.m. on New Year's Eve and reopen at 6 a.m. on New Year's Day. The shrine has also called for people to consider delaying their visits and come later in the month.

East Japan Railway Co. had announced it was not running trains through the night on Dec. 31 and the early hours of Jan. 1 as usual. The same went for all the Tokyo Metro subway trains.

Dazaifu Tenmangu shrine in Fukuoka Prefecture has decided to extend sales of its New Year's lucky charms, such as hamaya arrows and figurines based on the Chinese zodiac, through the end of March. Such sales usually end on the Lunar New Year's Day, which falls in February this year.

The Naritasan Shinshoji temple in Chiba Prefecture was to provide live camera feeds from the main approach and two other locations starting Dec. 31 so that visitors could check online how crowded it is.

"While taking into consideration their sincere intention of coming to worship, we want visitors to keep avoiding crowds in mind," a temple official said.