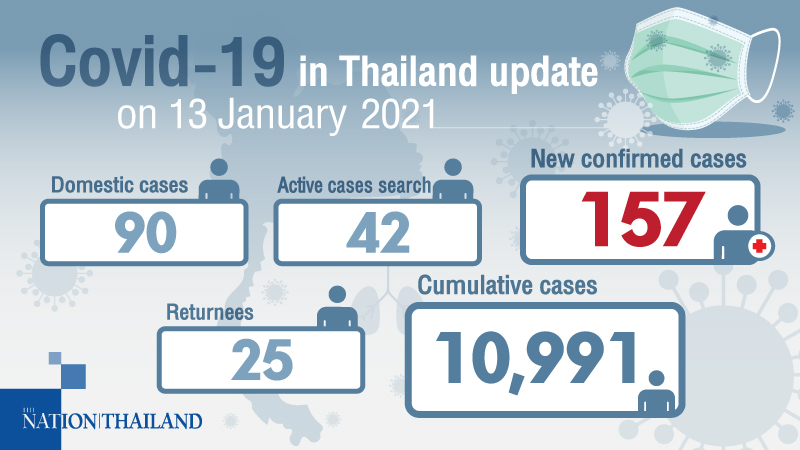 The Centre for Covid-19 Situation Administration on Wednesday reported 157 new cases, including 25 people who tested positive at border areas and in quarantine.

Some 90 of the 157 contracted the virus after visiting high-risk places or being in occupations that exposed them to virus patients.

Proactive testing led to the discovery of 42 positive cases in Samut Sakhon (six foreigners and four Thais), Pathum Thani (nine from Myanmar, three other foreigners and one Thai), Rayong (12 Thais), Chon Buri (five Thais), and Samut Prakan (one Thai and one from Myanmar).

Meanwhile, 21 Thais caught returning from Myanmar without permission on January 11 have Covid-19 with five of them are asymptomatic.

Also, two Thais who flew back from Iceland and the United States as well as a Dutch man from Germany and a man from Qatar have Covid-19.

As of Wednesday, 211 patients in the second wave have recovered and been discharged.

The number of confirmed cases in Thailand has now increased to 10,991. Of these, 8,791 contracted Covid-19 domestically, including 3,006 found after proactive testing. Some 2,200 were returnees.

So far, 6,943 patients have recovered and been discharged, 3,981 are presently being treated in hospital, and 67 have died.