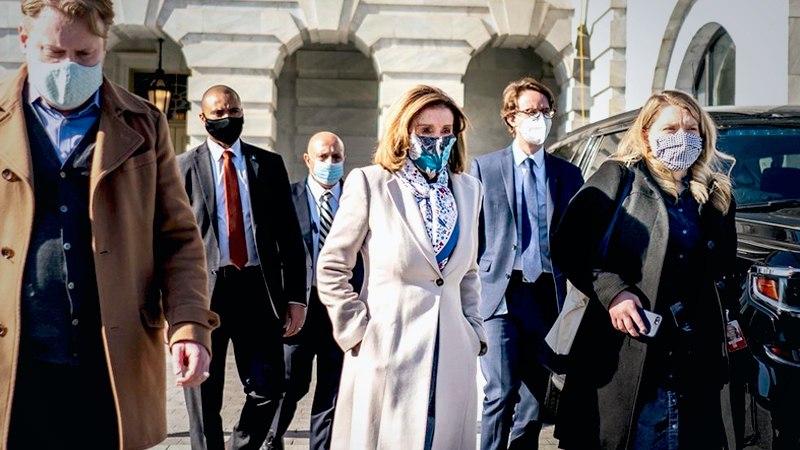 A week after the insurrection of the U.S. Capitol, Speaker of the House Nancy Pelosi greets the National Guard troops occupying and surrounding the newly fenced-in Capitol Complex in Washington, D.C., on Wednesday. MUST CREDIT: Washington Post photo by Melina Mara

WASHINGTON - The House prepared to break new ground Wednesday by impeaching a president for a second time, a week before he leaves office, indicting President Donald Trump for inciting a riot with false claims of a stolen election that led to the storming of the Capitol and five deaths.

Unlike Trump's first impeachment, which proceeded with almost no GOP support, Wednesday's effort attracted several Republicans, including Rep. Liz Cheney, the No. 3 party leader in the House. The Senate now appears likely to hold a trial after Trump's departure, an unprecedented scenario with uncertain consequences.

One of the final dramas of a tumultuous presidency, the impeachment unfolded against the backdrop of near-chaos in the House and uncertainty about where Trump's exit leaves the GOP. Democrats and Republicans exchanged accusations and name-calling throughout the day, while Trump loyalists were livid at fellow Republicans who broke ranks, including Cheney, leaving the party's leadership shaken.

Most Republicans stood by the president, including Minority Leader Kevin McCarthy, R-Calif. He argued on the House floor that while Trump bears responsibility for the attack on the Capitol, the "snap impeachment," which came together in a matter of days following the riot, would only "further fan the flames of partisan division."

McCarthy publicly endorsed censuring Trump for the first time, but the call came too late to serve as an effective alternative to impeachment.

House Speaker Nancy Pelosi, D-Calif., and other Democrats made it clear Wednesday that censure would not suffice in any case, given that Trump orchestrated a mob attack on Congress as it was certifying President-elect Joe Biden's victory.

"He must go," Pelosi said. "He is a clear and present danger to the nation that we all love."

The House is scheduled to take a final vote Wednesday afternoon, one week after the riot and just two days after the impeachment resolution was filed. It was a stunningly swift response from a House that took nearly three months to impeach Trump in 2019 on charges of abuse of power and contempt of Congress.

But with just seven days remaining in Trump's term, it became increasingly certain Wednesday that Trump would not be removed from office prematurely.

Senate Majority Leader Mitch McConnell, R-Ky., refused a request from Minority Leader Chuck Schumer, D-N.Y., to reconvene the Senate early to launch Trump's trial. That means it can start the proceedings no sooner than Jan. 19 - a day before Biden's inauguration.

McConnell, who signaled through advisers Tuesday that he would be open to a possible conviction, said in a memo released as the House debated that there was no chance that a trial could be fairly concluded before the inauguration.

"I have not made a final decision on how I will vote and I intend to listen to the legal arguments when they are presented to the Senate," he said in the note, first sent to his fellow Republican senators.

Meanwhile, one influential Republican - Sen. Lindsey Graham, S.C. - came out strongly against it.

"It is a rushed process that, over time, will become a threat to future presidents. As to Senate leadership, I fear they are making the problem worse, not better," he said, not specifying which party's leaders he was critiquing. "The last thing the country needs is an impeachment trial of a president who is leaving office in one week."

Moments after McCarthy called on Trump to "quell the brewing unrest," Trump issued a brief statement seeking to do just that.

"In light of reports of more demonstrations, I urge that there must be NO violence, NO lawbreaking and NO vandalism of any kind," he said. "That is not what I stand for, and it is not what America stands for. I call on ALL Americans to help ease tensions and calm tempers. Thank You."

The statement - which was read on the floor by Trump loyalist Rep. Jim Jordan, R-Ohio - came as several Republican lawmakers struggled with their decisions, which McCarthy declined to whip as a matter of party loyalty.

Most Republicans in Wednesday's debate, like Graham, sidestepped the specific charge against Trump, instead arguing that Democrats were being divisive and that the impeachment was hasty and unnecessary. Several referred to last summer's racial justice demonstrations to accuse Democrats of hypocrisy, saying those protests were also unruly and violent. 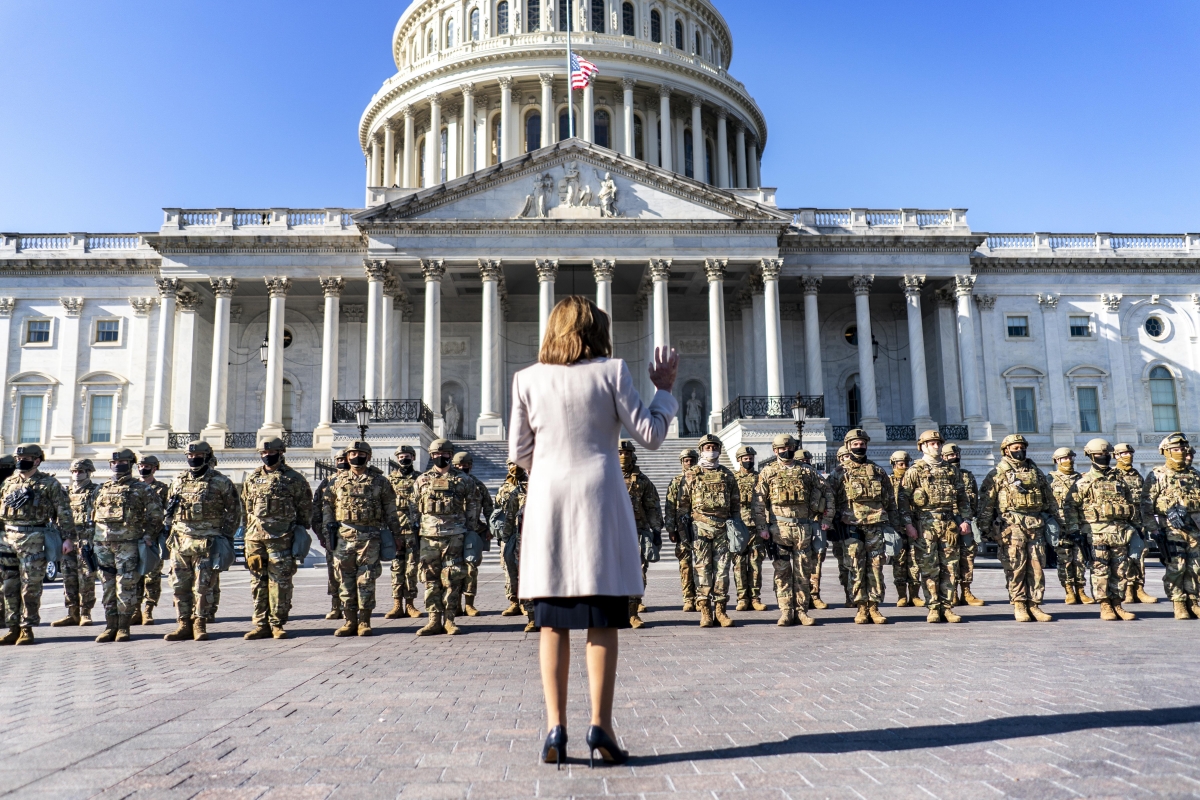 Many GOP members said they were struggling to reconcile their anger at last week's events, and Trump's culpability in them, with their fears of escalating violence and threats directed at lawmakers.

"This isn't a fun time, that's for sure," said Rep. David Valadao, R-Calif., who said he was undecided just hours before the vote.

Cheney's decision in particular emboldened the corps of Republicans breaking with Trump, and numerous Democrats cited her strong statement announcing her decision.

Democrats encouraged the handful of Republicans who came to the floor Wednesday in support of impeachment. When Rep. Dan Newhouse, R-Wash., became the sixth Republican to publicly break with Trump, colleagues across the aisle delivered applause.

"These articles of impeachment are flawed, but I will not use process as an excuse," he said. "There is no excuse for President Trump's actions."

Rep. Jaime Herrera Beutler, R-Wash., another defector, said, "I am not choosing a side - I'm choosing truth. It's the only way to defeat fear."

But the great majority of Republicans speaking Wednesday put little distance between themselves and Trump, instead accusing Democrats of embarking on a divisive second impeachment without acknowledging his crusade to overturn the November election or his actions to invite supporters to Washington on Jan. 6 and send them toward the Capitol.

"It's always been about getting the president, no matter what," Jordan said of Democrats in a speech on the House floor. "It's an obsession, an obsession that has now broadened. It's not just about impeachment anymore. It's about ... canceling the president and anyone that disagrees with them."

Rep. Andy Biggs, R-Ariz., leader of the pro-Trump House Freedom Caucus who had embraced the "Stop the Steal" effort than culminated in the Jan. 6 rally, warned Democrats that they would only embolden Trump supporters if they vote to impeach him a second time.

"You believe that your hunger will be finally satiated by impeaching this president without completion of his full term of office," Biggs said. "Instead of stopping the Trump train, his movement will grow stronger, for you will have made him a martyr."

The scene in the Capitol highlighted how fluid the political landscape has become one week before the departure of a president who has aggressively shaken up politics for four years. Cheney and Jordan were emerging as leaders of what are roughly anti- and pro-Trump factions of the GOP, with the party's nominal leader, McCarthy, somewhere in the middle.

Democrats, meanwhile, face what is likely to be Pelosi's last term as speaker without a clear successor and with the narrowest congressional majorities in decades - often a recipe for trouble as voters' expectations exceed a party's ability to deliver.

The most immediate fallout from the impeachment effort appears likely to occur inside the Republican Party, as several Trump loyalists called for Cheney to immediately resign her leaderships position. A petition for her resignation circulated among GOP offices in the Capitol as hard-right members seethed over her role in backing Trump's ouster.

Cheney on Wednesday insisted she would not resign.

"I'm not going anywhere," she told reporters, repeating that impeachment represented a "vote of conscience" for lawmakers. "Our nation is facing an unprecedented, since the Civil War, constitutional crisis. That's what we need to be focused on. That's where our efforts and attention need to be."

Democrats, meanwhile, prepared for a new governing reality - with Biden assuming the presidency in a week and Democrats taking the narrowest of Senate majorities, with Vice President-elect Kamala Harris poised to break 50-50 ties.

With some Democrats openly floating delaying transmission of the impeachment measure to allow the Senate to confirm at least some of Biden's Cabinet nominees, Pelosi on Wednesday did not respond to questions about her plans.

Some Republicans predicted that their internal bloodletting over Trump would soon be swept aside once Democrats take unified control in Washington.

"We're going to get through this, and we're going to be united, because Speaker Pelosi is going to bring some very dangerous policy to the House floor that's frankly going to divide them and unite us," said Rep. Richard Hudson, R-N.C., a junior member of the party leadership.

Members of both parties expressed awe at how quickly the process of impeaching Trump moved over the past week. The previous Trump impeachment - rooted in his efforts to leverage foreign aid to Ukraine in an effort to dig up dirt on Biden and his son, Hunter - unfolded over months, with dozens of closed-door interviews and open committee hearings.

"Today, we don't need a long investigation to know the president incited right-wing terrorists to attack the Congress to try to overturn constitutional government," said Rep. Zoe Lofgren, D-Calif., who has participated in every presidential impeachment since Richard M. Nixon's as a lawmaker or aide. "The actions were in public - plain as day. His actions are the most serious offense against our Constitution and our country. They are impeachable acts."