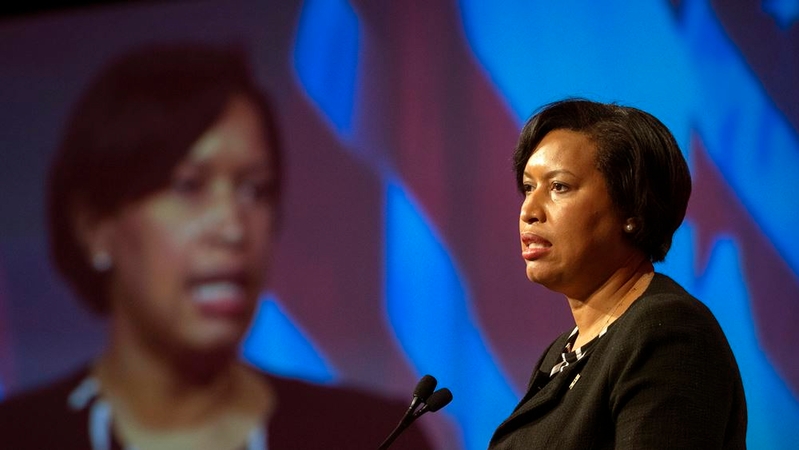 WASHINGTON - Workers had just fenced off all of Capitol Hill - not just the congressional complex but Mayor Muriel Bowser's Capitol Hill: the wide plaza that locals bike across on sunny days and the gentle hill where they take their children to sled in the snow.

Bowser looked at her city's geographical and symbolic heart, transformed into a militarized zone. Then, she laced her hands together, pivoted toward a group of 50 National Guard troops in her high-heeled boots - and made a pitch, of all things, for their tourism.

"I know you probably won't have a lot of time to enjoy our beautiful city," she said to the volunteers from Virginia who had left their homes and families to protect the nation's capital from insurrectionists, catching sleep on its cold marble floors. "When you come back, please be sure to do exactly that."

Since the Jan. 6 storming of the Capitol, and throughout an unprecedented military clampdown to prevent further violence at President-elect Joe Biden's inauguration, Bowser has popped up everywhere.

She held two news conferences in the hours during and after the riot, while federal authorities answered no questions from the reporters. In the following days, with near-silence from Trump administration about the attack, Bowser spoke authoritatively to a nation hungry for information and reassurance.

The 48-year-old Democrat has stayed on message, just as she did when addressing the National Guard troops - using the unfolding national crisis to make the case for the city of Washington, her native home.

Bowser, first elected in 2014,has been in the national spotlight before, most recently in late spring. She abandoned her years-long reluctance to speak strongly against President Donald Trump, whose cooperation she believed she needed, to criticize his response to the protests over the death of George Floyd.

The tangle quickly escalated far beyond the personal barbs they both fired on Twitter. Four days after federal law enforcement used tear gas to clear peaceful protesters from the street so Trump could pose for a photo, the city awoke to find that Bowser had ordered "Black Lives Matter" painted in enormous yellow letters yards from where the president had stood.

Photographs of Bowser's taunting brainchild circulated around the world.

Now, the cameras are trained on Bowser again. From "Good Morning America" to "Face the Nation" to "The Situation Room," she has been interviewed by almost every national network over the past two weeks. A few of her regular news conferences, ordinarily streamed only on the local government-access cable station, have gone live coast-to-coast.

Anthony Williams, who was mayor of Washington during the Sept. 11, 2001, terrorist attacks, said he has been glued to Bowser's appearances. "She's done a great job of stepping up and showing national leadership, notwithstanding the fact she isn't given the respect as the governor of a state," Williams said. "Yet she has state responsibilities. On top of that, she has national responsibilities."

For most inaugurations, the public role of the District of Columbia mayor is to roll out the welcome mat for hundreds of thousands of tourists, then watch the parade from a reviewing stand outside the Wilson Building, D.C.'s city hall.

Not this year. When it became clear that the U.S. Secret Service would attempt to shut down a large swath of the city because of the seriousness of the threat of right-wing violence on Inauguration Day, it was Bowser - not Trump or Biden - who made the announcement.

It was Bowser who told Americans in stark terms not to travel to town for inaugural events. People across the 50 states heard her words and canceled their plane tickets.

"If you take the preparation we did in 2009 and preparations she has to do now in 2021, the degree of difficulty which she's operating under is at least tenfold, maybe twentyfold," said former mayor Adrian Fenty, an early political mentor of Bowser's. He was mayor when Barack Obama's first inauguration brought unprecedented crowds and threats to the incoming president's safety. 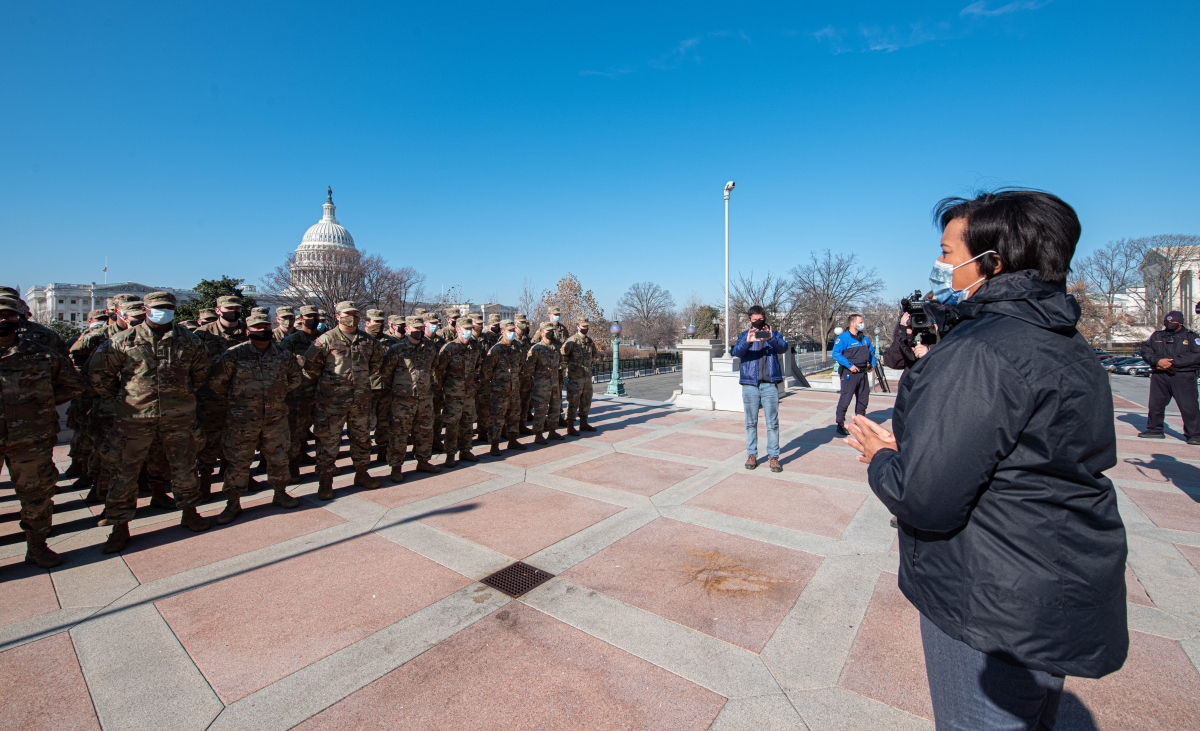 Bowser's chief of staff, John Falcicchio, said that the mayor has spoken with Biden and Vice President-elect Kamala Harris since Jan. 6, and that Bowser's stay-home announcement was a message the Biden team wanted to send.

"Mayor Bowser has been solely focused on how to keep people away from D.C.," Falcicchio said, noting that the circumstances have called for a complete reversal of Bowser's ordinary demeanor. "She travels the world trying to get people to come to Washington, D.C., to see all the great things that we have."

For support, Falcicchio said, Bowser has leaned on a network of Black Democratic mayors across the country, a group that includes San Francisco's London Breed, Atlanta's Keisha Lance Bottoms and Chicago's Lori Lightfoot.

"Especially in the last year, African American women mayors have come to the forefront of the American political dialogue," he said. "There's a collection of women who have stepped forward and assumed that mantle."

The shutdown of the monumental core was Bowser's latest somber announcement in a year full of them as she has wielded her executive authority to close businesses to limit the spread of the novel coronavirus and impose curfews after sporadic rioting during Black Lives Matter demonstrations.

"We've seen this year, we've had to do some extraordinary things to keep people safe," she said last week.

Bowser said she considers communicating with D.C. residents her "first responsibility," but the invitations to speak to the rest of the country have allowed her to help shape the inaugural plan.

"I do feel a responsibility to also communicate directly with the American people," she said. "I'm using my power as the mayor of the best city in the world to convene people."

Starting hours after the attack on the Capitol, Bowser has steered almost every conversation to her pitch for D.C. statehood. Again and again, she noted that the building ultimately was secured by police officers from a city whose residents do not have voting representation in Congress.

While the images of chaos and military preparations being beamed around the world may not cast the nation's capital in the most positive light, statehood advocates are hoping Bowser's decision to fill what seemed like a national leadership void has educated millions about the cause.

"In times of great concern, you need leadership, and we're not getting that at the federal level. The mayor is stepping up," said Josh Burch, the founder of Neighbors United for D.C. Statehood. "And when she uses those moments to teach about our status and why statehood isn't just important for us, but important for them, she's doing a great of seizing the opportunity that's given to her."

Fenty said he is hearing from acquaintances across the country who have seen Bowser on television - and in at least one case, is suddenly interested in D.C. statehood.

He reflected on his own experience in the days leading up to Obama's 2009 inauguration. The mayor and the incoming president met up 10 days before the swearing-in. They got into a car headed north, out of downtown and through some residential neighborhoods. Fenty did not know the destination.

Obama, it turned out, wanted to stop at Ben's Chili Bowl, a famed neighborhood eatery. Falcicchio, who was an aide to Fenty at the time, remembers crowds cheering as if the Beatles had stopped by.

Bowser took her own car ride through Washington in the lead-up to this inauguration.

After midnight on the night of the attack on the Capitol, she and acting D.C. police chief Robert Contee circled the city to assess the state of affairs.

At the Capitol, they stopped to thank Inspector Robert Glover, the D.C. officer who had been the commander on the scene. Bowser told Glover that people would remember what he had done that day.

Then, they drove on and looked out at what the day had wrought, riding mostly in silence.