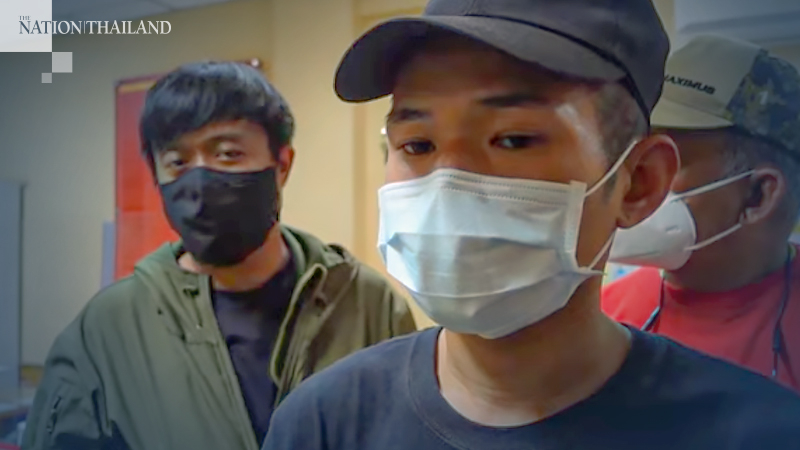 Mongkol Santimetakul, a member of the pro-democracy protesters’ security unit, on Sunday recounted his kidnapping on Saturday night by a group of mysterious men.

Mongkol had apparently been pulled into a van as he was walking out of a convenience store on Saturday night by a mysterious man who then proceeded to send out messages on the guard's phone claiming he was an Isoc officer.

“All that night, this man kept ordering me to sign a document, which I refused because I could not read it,” he said.

“He also issued threats demanding that I stop participating in pro-democracy rallies.”

Mongkol said there were several men, one of whom spoke in the southern Thai dialect, adding that he had not been tortured.

As for the post reading “help” on his Facebook page, Mongkol said he did not post that message because the group had seized his smartphone, adding that he had to give them his phone password to save his life.

“Later, one of the men said they will drop me off in the border area, but then apologised because they had ‘misunderstood’.

“He then covered my head with a jacket before pushing me out of the van,” he said. “When I removed the jacket, I found myself at Soi Pang Pu 29 in Samut Prakan province and I asked staff at a convenience store nearby to contact my friends to pick me up.”

After Mongkol recounted his experience with the press, an attorney from the Thai Lawyers for Human Rights took him to file a police complaint at the Pak Nam Police Station.

Separately, Move Forward Party MP Rangsiman Rome said this case is similar to the forced disappearance of Thai activist Wanchalearm Satsaksit, who was abducted from a street in Phnom Penh on June 4 last year.

He said Isoc should cooperate with police officers or other agencies to take legal action against those who kidnapped the guard instead of just denying the case.

"I also think the House speaker should consider a draft legislation that will prevent forced disappearances, because this problem has existed in society for a long time now,” he said.

“I would also like to emphasise that we cannot deny abduction cases, because people can be kidnapped at any time.”

Meanwhile, pro-democracy activist Sombat Boonngamanong also wrote in a Facebook post of his experience when he was abducted for nine days. He said abducting people just because they differ in political ideologies is villainous behaviour.