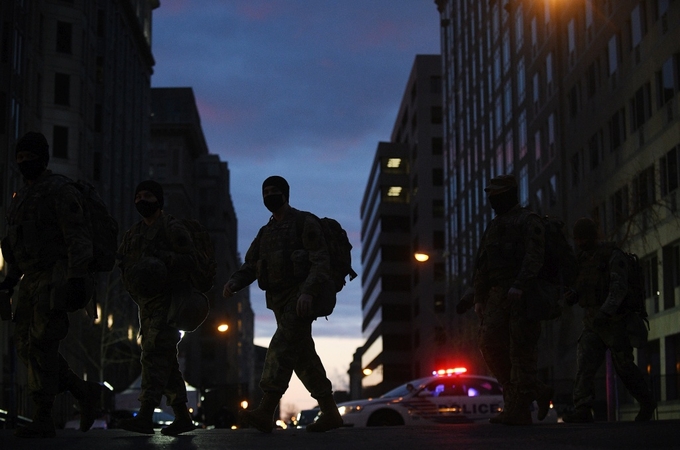 WASHINGTON - U.S. defense officials say the federal government is screening the 25,000 National Guard troops who have begun flowing into the nation's capital to secure the inauguration because concerns about extremism in the ranks are intensifying.

The screening comes after a number of pro-Trump rioters involved in storming the U.S. Capitol on Jan. 6 were found to have military ties, raising questions about extremist sentiment within the armed forces. Dozens of people on a terrorist watch list were in Washington as the deadly riot unfolded.

A U.S. defense official, speaking on the condition of anonymity to discuss the sensitive preparations, said the Army is working with the FBI to vet all service members supporting the inauguration. The Army maintains awareness of threats but does not collect domestic intelligence itself, the official said. It was not immediately clear how extensive the FBI vetting of the military personnel would be.

The screening comes as thousands of troops in camouflage uniforms patrol the streets of the nation's capital, which has turned into a fortress of security barriers and fences in the lead-up to the inauguration. Many of the guardsmen are armed, but they often do not have magazines loaded in their rifles.

Maj. Gen. William Walker, commanding general of the District of Columbia Guard, said in an interview with Defense One that the screening represented an "extra layer" of security for this deployment on top of the continuous monitoring that the U.S. military does of its service members.

"For this deployment everybody is screened additionally, but it's more of a reassurance, because we do everything we can do (to) know our guardsmen, our soldiers and airmen," Walker said.

Army Secretary Ryan McCarthy, who is overseeing the D.C. Guard and the military's preparations for the inauguration, said in an interview with The Associated Press that the vetting process has not flagged any potential problems with the troops coming to help protect the inauguration.

"We're continually going through the process, and taking second, third looks at every one of the individuals assigned to this operation," McCarthy told the AP, which reported that the screening is being carried out by the FBI and is scheduled to be completed by Inauguration Day - Wednesday.

McCarthy told the AP that he has told commanders to keep an eye out for any problems within their units.

Because D.C. is not a state, its Guard answers to the president, but his authority is traditionally delegated to the defense secretary and the Army secretary, who assume operational control on the president's behalf.

The extra screening of the forces flowing into the city from states demonstrates the high level of concern U.S. officials have heading into the week. President Donald Trump is set to be the first outgoing president since 1869 to skip his successor's inauguration.

A second defense official said the Pentagon received 143 notifications of extremism-related probes last year from the FBI, 68 of which were related to suspected domestic extremism among current and former service members - a category that includes White nationalism, anti-fascist, antiabortion and anti-government beliefs. Most of the cases were related to veterans, the official said.

In a statement, the Army said it is working with the Secret Service to determine which service members supporting the inauguration require additional background screening.

All service members go through an annual program that requires them to report information regarding known or suspected extremist behavior in the ranks, the Army said. The Army also noted that the D.C. Guard is providing additional training as service members arrive in the city, instructing them to report anything they see or hear that seems inappropriate to the chain of command.

"There is no place for extremism in the military and we will investigate each report individually and take appropriate action," the Army said in the statement. "The Army is committed to working closely with the FBI as they identify people who participated in the violent attack on the Capitol to determine if the individuals have any connection to the Army."

To enter any branch of the U.S. military and receive a security clearance, all personnel undergo background checks, the Army added.

In a statement, Capt. Chelsi Johnson, a spokeswoman for the National Guard, said all members coming to Washington for the deployment "go through a credentialing process."

"That information is shared with the requesting federal agencies and added to their database," Johnson said. "We cannot speak for those agencies and how they use the information."