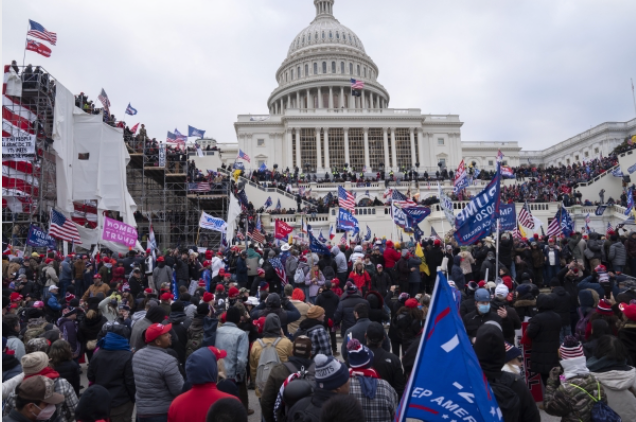 President Donald Trump's four years in office come to a close Wednesday after a reign defined by constant chaos, corruption and scandal, a tenure that numerous scholars predict is destined to rank him among America's worst presidents.

Trump's claims of policy victories - including a raft of conservative judges and steps toward Middle East peace - will be vastly overshadowed by his mismanagement of the pandemic and his unprecedented assault on the U.S. election results, they said.

"You never want to be ranked below William Henry Harrison, who was only president for one month. If you rank below him, it means you've harmed the country," presidential historian Douglas Brinkley of Rice University said. "Now you're getting into James Buchanan and Andrew Johnson territory. Trump will automatically be in that category."

Yet as Trump departs the White House - and the daily controversies and social media warfare he provoked begin to subside - the historians preparing to reckon with his legacy said it's not just Trump who will be examined under the harsh reflection of history's mirror, but also American society and the nation's commitment to democracy.

Trump's relentless attacks on civic institutions, provoking of racial and social divisions, trampling of political norms, broadsides against the free press and impugning of America's international allies have raised profound questions about the nature of American governance and the endurance of the values the United States has long professed to cherish, scholars said.

"Trump and Trumpism have brought those flaws into sharp relief," said Matthew Dallek, a political historian at George Washington University. "The fact that 74 million people could vote for someone who is a conspiracy theorist and a perpetual liar and encouraged violence and the Proud Boys and white supremacy - in that sense, the Trump presidency will be important for those reckoning with 'What does it mean to be an American?' And also what does it mean to live in what a lot of people thought was the world's greatest experiment in democracy, when it turns out that experiment is incredibly fragile?"

The Trump years have been something of a boon for political historians and scholars who were vaulted into slots as cable television analysts and newspaper pundits to assess his presidency in real time. Now, the more traditional work begins, as they gain distance from the day-to-day political combat and wade through historical records of the past four years to make broader judgments about his place in history.

It is here that some raised concerns over the volume and reliability of the records that can help guide them. Before his Twitter account was shutdown in the wake of the U.S. Capitol siege on Jan. 6, Trump had posted nearly 60,000 tweets and retweets to more than 88 million followers - offering a moment-to-moment reflection of his mind-set.

Yet scholars said other records, such as memos and interviews with aides, are more tenuous. Some worried that Trump and his associates will destroy documents despite laws meant to preserve them, while others voiced concerns that White House aides, who like their boss have a record of misleading the public, will be unreliable narrators of his presidency.

"I wonder if there will be the same documentation of Trump's own decision-making and processes that we have with other presidents," said Joseph Crespino, a history professor at Emory University in Atlanta. "He's not a reader or a note taker or a memo writer. That will be a challenge."

In many ways, Trump's presidency was so aberrant - a real estate promoter and reality television star with no political or military experience winning the highest elected office with a minority share of the popular vote - that it is difficult to place him within the continuum of his peers, historians said.

Yet they also emphasized that Trump did not come out of nowhere - that his rise to political prominence behind a false birther conspiracy seeking to delegitimize his predecessor, President Barack Obama, is rooted in the Republican Party's history of racial grievance politics and its leaders' increasing willingness to embrace the far-right wing.

Likewise, they said, Trump's use of new social media tools to spread disinformation was made possible by rapidly changing technologies, but the rhetoric he employed to radicalize his base is steeped in language of American demagogues - from Joseph McCarthy to Father Charles E. Coughlin to George Wallace.

Historians "will think less in terms of analogy [to past presidents] and think more in terms of puncturing the mythic past that both Trump and the people opposed to him alight on - that America had a pure form of democracy that we either lost because of Trump or that Trump brought back," said Nicole Hemmer, a historian who specializes in conservative media and is working on the Obama Presidency Oral History at Columbia University.

"There's a lot more continuity here than we might think," Hemmer said. "We might not be able to pluck one person out of the past and say that is what Donald Trump is like. But we can understand that throughout American history there has been racism and fascism and anti-democratic forces and say he is drawing from those powerful influences."

Ruth Ben-Ghiat, a New York University historian who studies fascism, said Trump is best understood in comparison to authoritarian-leaning figures abroad who have employed similar tactics of sowing division and chaos - which she called "crisis politics" - to wield power.

In her view, Trump's critics missed an important point when they mocked Trump for being lazy by spending so much time golfing and tweeting. Like other autocrats, she said, Trump focused on using his presidency to enrich himself - in Trump's case by constantly promoting his private resorts and golf courses.

And the president deployed his social media accounts to delegitimize criticism and maintain allegiance from his followers, fostering a "personality cult that is way out of proportion to any other president, including Ronald Reagan," Ben-Ghiat said.

"I don't think we can use the same frame of reference as with other presidents because Trump never intended to govern in a recognizable presidential manner," she emphasized. "His aims and goals were totally different."

Republicans have called such criticism of Trump's presidency overblown and faulted his critics for fanning the divisive political partisan and cultural divides that led to mass social justice protests last summer and violent clashes between Trump supporters and counterprotesters since the election.

Trump's GOP allies also have pointed to successes in the party's conservative agenda - including three conservative Supreme Court justices, a Republican-backed tax cut, broad environmental and business deregulation - as evidence of the president's achievements. And they noted that Trump won 74 million votes in 2020, the second-most ever in a presidential election to Biden's 81 million, reflecting his deep support among the public.

Yet historians said Trump's tenure is virtually certain to be defined by the tumultuous events of the past year, during which he has actively sought to play down the risks of the global pandemic, used government force to clear protesters from a park just beyond the White House gates last June, falsely claimed victory over President-elect Joe Biden and helped incite a pro-Trump mob that stormed the Capitol, resulting in the deaths of five people.

To Leah Wright-Rigueur, associate professor of American history at Brandeis University, Trump's presidency has been a case study in the "naked, unadulterated pursuit of power and self-interest, at the cost of 400,000 lives and at the cost of the American union."

She added that Trump's four years have dramatically exposed what racial minorities and other marginalized Americans have long understood - that the nation's democracy has always been "brutal, exclusionary and flawed" for many citizens.

The storming of the Capitol "will be the moment everybody remembers about Trump's presidency," Wright-Rigueur said. "It tells the story about the failures of American democracy - not just about Trump, but also the centuries-old lies we tell ourselves about who we are."