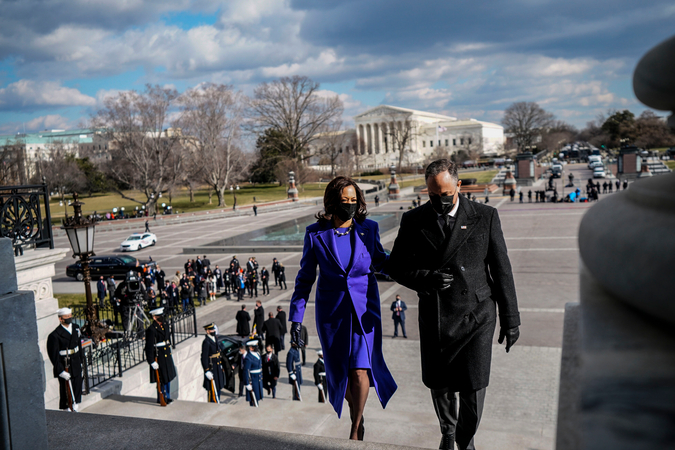 WASHINGTON - Democrats claimed control of the Senate by the thinnest possible margin Wednesday as Vice President Kamala Harris swore in three new Democratic senators, bringing Republicans and Democrats to an even 50-50 split in the upper chamber.

Harris, appearing in her role as Senate president hours after her inauguration as vice president, will serve as the tiebreaker, giving her party a one-vote majority - and thus the power to set the agenda in Senate committees and on the Senate floor.

The changing of the guard took second billing Wednesday to Joe Biden's ascension to the White House. But with Democrats already in control of the House, the transition in the Senate holds enormous implications for Biden's ability to staff executive agencies and pass legislation at the dawn of his presidency.

Sen. Chuck Schumer, D-N.Y., the incoming majority leader, has laid out goals for the opening weeks of the new Democratic Senate, balancing the need to confirm Biden's most important nominees with the new president's desire to pass another pandemic relief bill, at a cost of nearly $2 trillion. Meanwhile, Schumer expects to conduct an impeachment trial for former president Donald Trump, who stands accused of fomenting a mob attack on the U.S. Capitol two weeks ago.

On Wednesday, Schumer declined to provide further details on the path ahead. "Today's Joe Biden's day," he told reporters. But even as the inauguration festivities wrapped up early Wednesday afternoon, it remained unclear whether the Senate would be able to confirm any of Biden's nominees by the end of his first day in office.

If none are confirmed, it would be a break with recent practice: Trump had two nominees confirmed on his first day in office, while Barack Obama had six and George W. Bush had seven. As the Senate convened, aides said they were still working to clear one Republican senator's concern and arrange a confirmation vote for Avril Haines as director of national intelligence.

Nominees for the Departments of State, Defense, the Treasury and Homeland Security probably will wait until later this week, or perhaps next week, because of a combination of procedural hurdles and GOP objections.

The three senators who began work Wednesday include Harris's replacement, Alex Padilla, the 47-year-old former California secretary of state and son of Mexican immigrants who was appointed to fill the remaining two years of Harris's term.

Also sworn in were the two Georgia Democrats whose victories in a pair of Jan. 5 runoff elections sealed the transition of power in the Senate: Jon Ossoff, a 33-year-old media executive, and Raphael Warnock, a 51-year-old Baptist minister who became the first African American senator to represent Georgia.

"Today, America is turning over a new leaf," Ossoff told reporters. "Georgia has sent a young Jewish man and a Black pastor to represent our state in the U.S. Senate. It's a sign of generational and epochal change for our state."

It is also a reflection of the contemporary Democratic coalition, which over the past decade has been increasingly built on a rising number of affluent White voters along with large majorities of the nation's Black and Latino voters.

They join a Democratic caucus intent upon delivering early, tangible results for the new president, starting with an improved response to the coronavirus pandemic that has killed about 400,000 Americans and wreaked economic devastation. Ossoff and Warnock pledged during their campaigns to deliver $2,000 stimulus checks to their voters - $1,400 more than what was provided in a relief bill that Trump signed last month.

In his inaugural address Wednesday, delivered from a rostrum overrun by violent pro-Trump rioters just two weeks ago, Biden called on Americans - and his former Senate colleagues - to "step up" and confront a "time of testing."

"We face an attack on our democracy and on truth, a raging virus, growing inequity, the sting of systemic racism, a climate in crisis," he said, adding: "It's time for boldness, for there's so much to do. And this is certain - I promise you we will be judged, you and I, by how we resolve these cascading crises of our era."

Democratic senators leaving the speech said they would meet Biden's challenge, sidestepping the obstacles presented not only by their Republican counterparts but the Senate's circuitous procedures meant to empower the minority party.

"I'm excited about a chance to show America what we can do when we're in the majority," said Sen. Cory Booker, D-N.J. "There's a lot of promise in these coming days. We will get it done."

There are also considerable warning signs: For one, Schumer and Sen. Mitch McConnell, R-Ky., the top Republican leader, have yet to consummate a power-sharing agreement enshrining how the Senate will operate under a 50-50 split. Such an agreement is essential to constitute committees, set staff budgets and reach a mutual understanding for how the chamber - which handles a vast amount of business by unanimous consent - can operate smoothly.

McConnell signaled this week that he is looking for assurances from Democrats that they will not abandon the legislative filibuster, the Senate rule that requires 60 senators to agree to end debate and proceed to a final vote.

Democrats are under pressure from liberal activists to ditch the filibuster to pass major planks of the Biden agenda, including legislation addressing voting rights, the climate and police oversight, not to mention government spending and tax bills that historically have been the focus of pitched battles between the two parties.

The last time the Senate was evenly divided, in 2001, the two parties agreed to a far-reaching power-sharing arrangement that kept committees evenly split but otherwise gave the party with the vice presidency - in that case, the GOP - the crucial power to set the agenda. But that was a less partisan era on Capitol Hill, and the filibuster was not under threat as it is now.

Sen. John Barrasso, R-Wyo., the No. 3 GOP leader, said it was prudent for McConnell to insist on assurances given the partisan environment. He noted that Republicans insisted on maintaining the filibuster in the first two years of Trump's presidency, when the GOP controlled both the House and the Senate.

If Democrats seek to eliminate the filibuster, he said, "I think it would be very destructive."

"We're going to have some issues that we just fundamentally disagree with," Murkowski said. "But, I think, to the president's words, you can still disagree from a policy perspective and you can do so in ways that are still respectful and allow you to continue to work toward other goals."

However, the difficulty in securing quick nominations threw a pall over the happy talk on Wednesday. Aides, who spoke on the condition of anonymity to describe internal discussions, said the most likely Biden nominees to be quickly confirmed were Haines and treasury secretary nominee Janet Yellen. But securing an immediate vote requires all 100 senators, Republican and Democrat, to agree to expedited procedures.

Haines's nomination was being held up by Sen. Tom Cotton, R-Ark., who was seeking clarification of a comment she made in a Tuesday hearing about whether she would seek to take action against CIA officers involved in post-9/11 detainee abuses, according to aides familiar with the matter.

Sen. Marco Rubio, R-Fla., the top Republican on the Senate Intelligence Committee, said in a tweet that he skipped the inauguration ceremony "because I am working on addressing the remaining objections to an expedited Senate confirmation of President-Elect Biden's nominee for Director of National Intelligence."

"It's important we do this as soon as possible," he said.

The delays vexed Democrats, who acknowledged that the late date of the Georgia runoffs had delayed Senate proceedings. But they laid greater blame on the unusually bitter transition period since the Nov. 3 election.

"Look, the transition was delayed far too long by President Trump's baseless conspiracy theories about how he won the election," said Sen. Chris Coons, D-Del., a Biden confidant. "There were confirmation hearings for a whole series of [Biden's] seasoned and capable Cabinet nominees . . . really capable folks. We should be confirming them today."