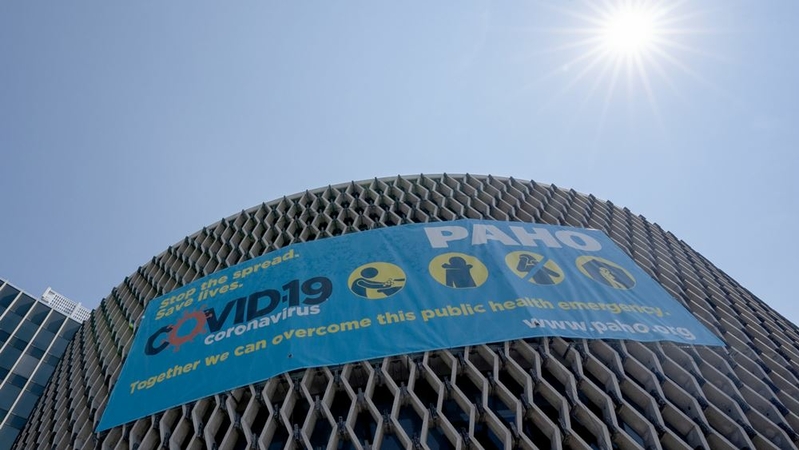 The World Health Organization regional office for the Americas in Washington, D.C., on Aug. 26, 2020. MUST CREDIT: Bloomberg photo by Stefani Reynolds.

President-elect Joe Biden plans to take immediate steps Wednesday after he is inaugurated to re-engage with the World Health Organization and send top U.S. medical expert Anthony Fauci to speak to the group in a strong repudiation of Donald Trump's snubs during the coronavirus pandemic.

The incoming administration plans to participate in the WHO executive board meeting this week, with Fauci, the top U.S. infectious disease expert, heading the delegation and speaking. Once the U.S. resumes its engagement with the WHO, the new administration will work with the body to strengthen and reform the group, according to a fact sheet released by the Biden transition team.

Trump announced in May that the U.S. would exit the WHO because of what he said was its undue deference to China and failure to provide accurate information about the coronavirus. He often blasted the organization and also has publicly belittled Fauci and diminished his role in past months.

In announcing these changes, Biden is underscoring that he intends to set a new science-based tone in seeking to reverse Trump's dismissal of virus mitigation strategies and international cooperation in addressing the pandemic.

The U.S. had been the WHO's largest contributor, providing $400 million to $500 million in mandatory and voluntary contributions, and Trump's decision last year drew sharp criticism in Congress, as well as from allies in Europe. The WHO has been heavily involved in the fight against the coronavirus, especially in poor countries. The Geneva-based group said it looks forward to the participation of the U.S. delegation at Thursday's executive board meeting.

Meanwhile, the president-elect said he would sign an executive order requiring masks and physical distancing in all federal buildings -- including government office buildings -- as well as on federal lands and by federal employees and contractors in an attempt to help stem the spread of the surging coronavirus. He said this will be part of a "100 days masking challenge" to get Americans to wear masks in public.

"This is not a political statement; this is about the health of our families and the economic recovery of our nation," said Jeff Zients, who will be the new administration's covid response coordinator.

Biden is expected to sign another order in coming days requiring masks on trains and planes, which also fall under federal jurisdiction.

The approach represents a reversal of the stance taken by Trump, who clashed with public health officials by at times casting doubt on the benefits of wearing masks and generally refusing to wear them himself.

During the campaign, Biden suggested he'd impose a national mask mandate, citing face coverings' ability to slow the spread of the virus. But there's no clear authority for a presidential order outside of areas controlled by the federal government. Biden later revised his approach to focus on federal property and interstate travel.

Biden faces a challenge in persuading Americans to wear masks after Trump and Republican officials across the country politicized their use.

On Tuesday, as U.S. deaths topped 400,000 in the world's worst covid-19 death toll, Antony Blinken, Biden's choice for secretary of state, signaled that a U.S. rift with WHO may be healing and that the U.S. would join Covax, the 92-nation collaboration seeking to deploy Covid-19 vaccines around the world. While the Trump administration has given some $18 billion to vaccine and drug development through Operation Warp Speed, it declined to participate in Covax.

"The combination of rejoining, taking part in Covax and looking at how we can help make sure the vaccine is equitably distributed is something we're going to take on," Blinken told the Senate Foreign Relations Committee during his confirmation hearing on Tuesday.

The program plans to distribute some 2 billion doses around the world by the end of 2021. WHO Director-General Tedros Adhanom Ghebreyesus, whose agency leads Covax along with the Coalition for Epidemic Preparedness Initiatives and Gavi, the Vaccine Alliance, has expressed concern that drugmakers are prioritizing wealthier countries for vaccine clearances and distribution. That could delay distribution through Covax.

U.S. participation could help shore up the vaccine-equity program. China is one of the partner nations, and although its vaccines are not among those procured by Covax, Chinese drugmaker Sinovac Biotech said it has submitted data on its shot for pre-qualification. The EU is also supporting the plan.