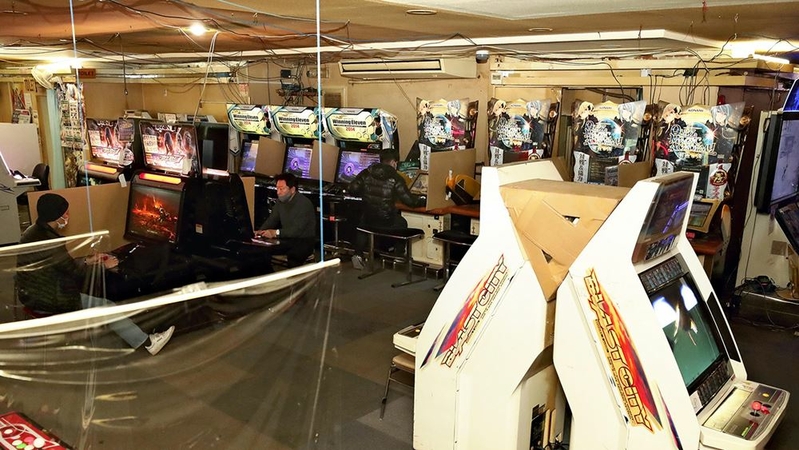 The last few customers are seen on Saturday in Game Spot 21 in Shinjuku Ward, Tokyo. The arcade had been outfitted with plastic sheets as a preventive measure against the coronavirus. MUST CREDIT: Japan News-Yomiuri

By The Japan News-Yomiuri · Tomoki Masuda

Game arcades in Tokyo have been falling like dominoes amid the coronavirus pandemic, left no choice but to close after what for some have been decades in operation.

Arcade operators have been requested to shorten their business hours after the second state of emergency was declared for Tokyo and 10 other prefectures. Yet even if they comply with the request, arcades remain ineligible to apply for financial assistance, such as the government subsidies available to restaurants and bars.

Taking stock of the rapid succession of closures, regular customers lamented the loss of their favorite gaming haunts.

For over four decades, Game Spot 21 could be found a short walk from the west exit of JR Shinjuku Station. Nestled among a hodgepodge of multitenant buildings jostling for space along a cramped side street, the arcade was always announced by the frenzied chirping of claw crane games that lined its entrance.

But in recent months, a profusion of plastic partitions had joined the nearly 50 mahjong and fighter game machines in the dimly lit interior as a sign of the times.

On Saturday afternoon, a dozen regular customers who were undeterred by the pandemic peered intently at their monitors. The well-known arcade beloved by generations of gamers was to close at midnight on Wednesday.

"Given the circumstances, we had no other choice," said Naoki Ichiki, 42, the arcade's manager and longtime employee of nearly 20 years.

In the 1990s, Game Spot 21 would have been packed with enthusiasts trying their hand at Sega's popular "Virtua Fighter" title. During the arcade's heyday, it had around 100 machines, and drew over 500 patrons daily.

Hit hard by the pandemic, attendance dropped to 10%. As sales also fell by 70%, the operator decided it was finally time to pull the plug for good.

"After the first state of emergency was declared, we closed the arcade for about two months as a temporary step. But our customers never came back," Ichiki said. He added that the extra scrutiny placed on Shinjuku during the pandemic as a "nightlife district" likely also had an adverse impact on business.

Yasuhiro Tsuji, 55, who runs a real estate company in Shibuya Ward, Tokyo, said he had been a frequent customer of the arcade from his teenage years, and expressed his disappointment about the closure.

"I've been coming here ever since the Space Invaders days and always felt a zing of excitement on each visit. This arcade was somewhere I could relieve stress and reset whenever I needed a breather. It's a shock to see this place go."

Takashi Noguchi, a self-employed 43-year-old from Shinjuku Ward, was similarly a regular presence for over 20 years. "I enjoyed chatting with the other regulars here between games. This place was like a candy store for adults," he said.

Game arcades have felt a pinch in recent years, threatened by the unabated march of home video consoles, online gaming and smartphones. According to the Japan Amusement Industry Association, there were 21,688 game arcades nationwide in fiscal 2008. That number was nearly halved to 12,167 in fiscal 2018.

The coronavirus has only exacerbated the ailing industry's woes. Since last spring, a sizable chunk of the population has elected to stay at home, drastically reducing foot traffic.

Now that a new state of emergency was declared this month, certain businesses including game arcades and pachinko parlors have been asked to shorten their hours and close by 8 p.m., although they do not qualify for the up to ¥60,000 a day in "cooperation funds" promised to restaurants and other establishments.

Across town, a void opened in front of Akihabara Station last year with the successive closures of the Sega Akihabara 2nd store in August and the Adores Akihabara outlet in November. Later that month, Shinjuku Playland Carnival closed in the Kabukicho district, marking the end of nearly half a century of business.