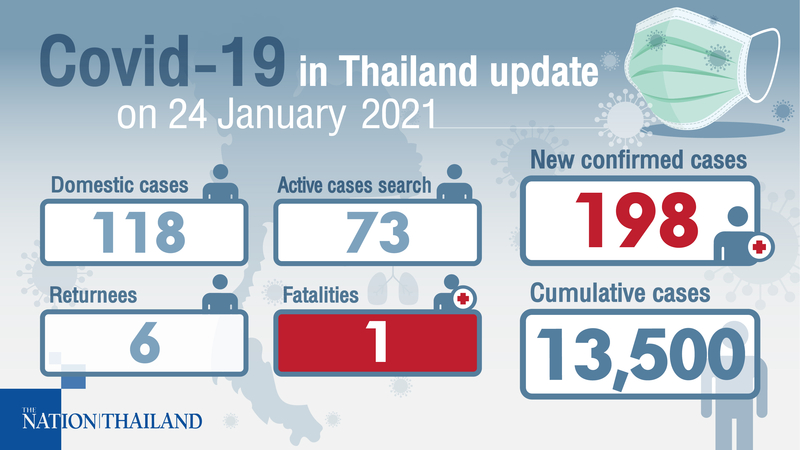 The Centre for Covid-19 Situation Administration (CCSA) on Sunday reported 198 new cases with one death in the past 24 hours.

Seven of the cases were international travellers in quarantine.

Of the new cases, 118 were exposed to the virus while visiting high-risk areas. The province with the highest number of infections was Samut Sakhon (76), followed by Bangkok (21), and Samut Prakarn (12).

Proactive testing led to the discovery of 73 cases, 70 of them foreigners and two Thais un Samut Sakhon, and one case in Rayong of a Thai woman.

Of the overseas travellers, four are Thai nationals returning from Belgium, Malaysia, Bahrain and the United Arab Emirates. Also testing positive were two French nationals who flew in from their country and a Myanmar man at the screening checkpoint.

A woman in Samut Sakhon, 73, who had an underlying disease (high blood pressure, Alzheimers, and epilepsy) later developed pneumonia and passed away on January 23. She got the infection from her family member on January 4 and was confirmed positive on January 9.

Meanwhile, 119 patients have recovered and been discharged.

As of Sunday, the number of confirmed cases in Thailand rose to 13,500. Of these, 11,136 contracted the virus domestically, including 4,568 who were found via proactive testing, and 2,364 are returnees. So far, 10,567 have recovered and been discharged, 2,860 patients are still in hospital and the death toll has risen to 73.