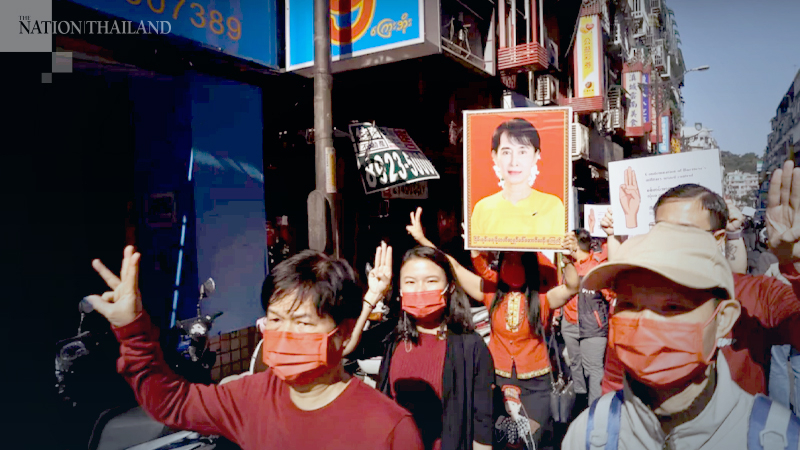 HONG KONG - Myanmar authorities on Saturday restricted Internet connectivity and blocked more social media websites, as thousands of people protested in the first street demonstrations since the military took power from the democratically elected government in a coup.

In a statement, Telenor said that authorities had ordered a "nationwide shutdown" of the network, citing "circulation of fake news, stability of the nation and interest of the public as basis for the order."

"Telenor Myanmar, as a local company, is bound by local law and needs to handle this irregular and difficult situation," the operator said, adding that the directive was made to all mobile operators there. "We have employees on the ground and our first priority is to ensure their safety."

The Internet shutdown followed the first major demonstrations since the Myanmar military seized power in a coup, returning themselves to direct rule and ending a power-sharing agreement with the elected civilian government, led by Aung San Suu Kyi and her National League for Democracy party. Dozens of activists and democratically elected ministers were arrested on Monday as the military seized power, and while some were released, Suu Kyi and Myanmar's president Win Myint continue to be remanded, charged with minor infractions that have allowed authorities to prolong their detention.

Reuters reported that on Saturday, Sean Turnell, an Australian economic adviser to Suu Kyi who has long studied and worked in the country, was also detained. Turnell, in a message to Reuters, said he was "being charged with something, but not sure what." Messages to Turnell were not returned.

On Saturday morning, protests began in various areas around Yangon, including factories and major intersections close to the city center. Demonstrators held banners denouncing the coup and military rule, and demanding the release of Suu Kyi, who is akin to a deity there. There were no immediate reports of clashes between protesters and police, despite the heavy presence of armed police on standby.

Suu Kyi spent 15 years under house arrest and won a Nobel Peace Prize for her nonviolent resistance to military rule before her release in 2010, and went on to lead her NLD party to landslide victories in democratic elections in 2015 and again last November.

The military, which allowed for this nominally democratic transition after half a century of rule and paved the way for these elections, allege that there was widespread fraud surrounding the vote, and used that as a pretext to seize power. The union election commission found no such evidence of voter fraud, and analysts have noted that the NLD win was so overwhelming that any minor irregularities would not have changed the result.

Since the coup, a steady drumbeat of resistance has been building, first with a civil disobedience campaign largely organized on social media, Facebook in particular, which is the de facto Internet in Myanmar, widely used and integral to communications there. The military-run government then blocked access to Facebook, prompting a migration to Twitter, which was blocked too along with Instagram.

Telenor expressed deep concern over these actions, which they said contradicted with international human rights law.

Human rights groups were swift to condemn the restrictions, pointing out the essential functions provided by the Internet amid a number of crises in Myanmar: the coup, humanitarian crises and ongoing ethnic fighting and the pandemic.

"Since the 1 February coup, people in Myanmar have been forced into a situation of abject uncertainty," said Ming Yu Hah, Amnesty International's Deputy Regional Director for Campaigns. "An expanded Internet shutdown will put them at greater risk of more egregious human rights violations at the hands of the military."

In a statement, civil society groups in Myanmar added that "the Internet is integral to our survival."

"These directives were given by an illegitimate authority body," the statement said, urging the ISPs and mobile operators not to comply. "By engaging in an illegal, unconstitutional seizure of power, the military does not have the right to be recognized as the governing body of Myanmar."