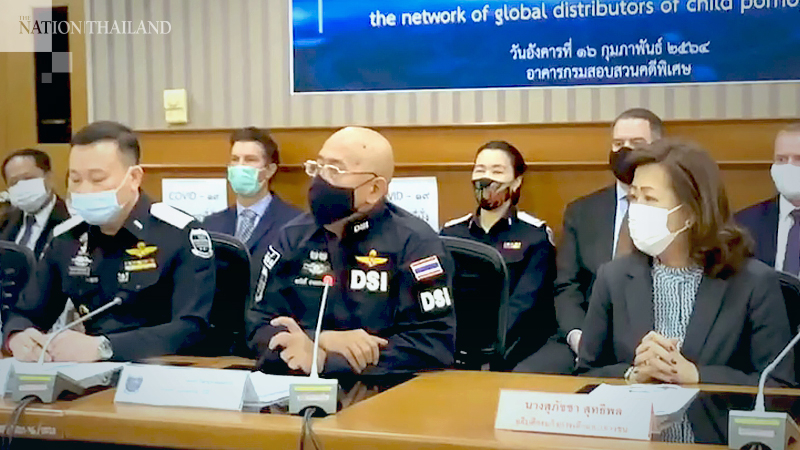 DSI swoops in on child pornography suspects in Pathum Thani

The Department of Special Investigation (DSI) and police on Tuesday announced they have arrested modelling agent Danudet “Nene” Saengkaew, 28, over charges of child pornography.

Danudet had been arrested on February 11 at his office, “Nene Modeling”, in Pathum Thani’s Khlong Luang district.

“The DSI has been tracking the suspect after an Interpol tip-off in 2018 that a lot of child pornographic material circulating in the dark web had originated from Thailand,” DSI chief Pol Lt-Colonel Korawat Parnpraphakorn said.

“This tip-off first led to the arrest of Thakorn Atthapathomchai, 30, in Bangkok’s Wang Thong Lang district on November 21, 2020.

“Investigators learned that Thakorn would contact parents via Facebook saying he was a modelling agent and would get them to bring their children in for an audition. He would then sexually assault the youngsters in a closed room,” he added.

The DSI chief said Thakorn has reportedly confessed that the photos and videoclips he had taken of assaulting or raping minors were being stored at the Pathum Thani modelling. This led to a crackdown on Danudet’s agency.

Thakorn has been sentenced to nine years in prison over several charge, including raping minors and violating the Computer Crime Act.

“Officials found more than 500,000 pornographic images of children on computers and hard-disk drives at the agency, as well as video cameras, mobile phones, sex toys, lubricant jellies and condoms,” added Korawat. “Officials are investigating to see how Danudet’s agency was involved in Thakorn’s crimes.”

Danunet was initially charged with violating the Computer Crime Act by uploading pornographic material into a computer system, which carries a maximum punishment of five years in prison and/or Bt100,000 in fine.