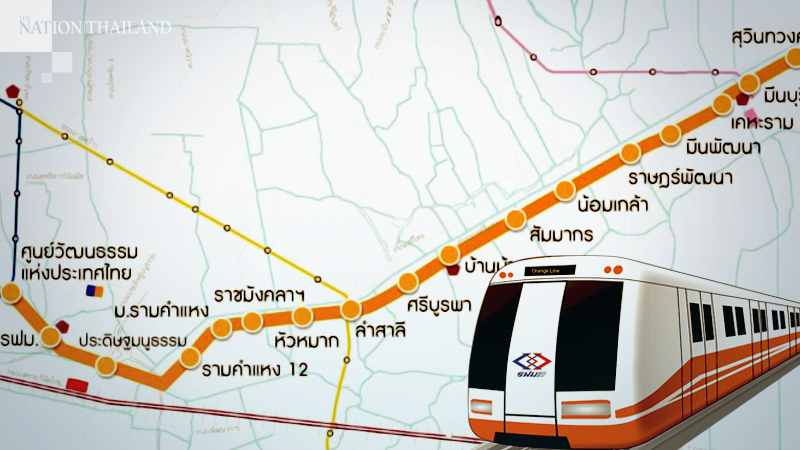 The Bangkok Mass Transit System Plc (BTSC) filed a lawsuit at the Central Criminal Court for Corruption and Misconduct Cases on Monday against the Mass Rapid Transit Authority of Thailand (MRTA) and related parties regarding the MRTA’s cancellation of bidding for construction of the Bt128-billion Orange Line western train section, a news source revealed on Tuesday.

The BTSC claimed that MRTA executives abused their power as government officials, in violation of Criminal Code sections 157 and 165 and Section 172 of the Organic Act on Counter Corruption.

Opposition MP Jirayu Huangsap claimed during last week’s no-confidence debate that the bid conditions had been altered at the request of Italian-Thai Development despite opposition from fellow bidder BTSC.

The ensuing legal dispute saw the bidding scrapped altogether on February 3 for the 13.4-kilometre line from the Thailand Cultural Centre to Bang Khun Non.

By raising this issue, the opposition aimed to gain no-confidence votes against Transport Minister Saksayam Chidchob, which led to six Palang Pracharath Party MPs abstaining from casting their votes due to a “lack of clear explanation to the opposition’s questioning”.

MRTA governor Pakapong Sirikantaramas said last week that the selection committee’s 50:50 weighting for financial and technical proposals had been altered to 70:30 on August 21, 2020, as the change in conditions was needed to protect the city's heritage and buildings from Orange Line tunnelling in the old quarter of Bangkok.

“To maintain reasonable financial returns in the present economic conditions, the MRTA decided to use the 70 per cent rule to achieve financial returns and 30 per cent for technical criteria to ensure the safety of people and archaeological sites that are national treasures,” Pakapong said.