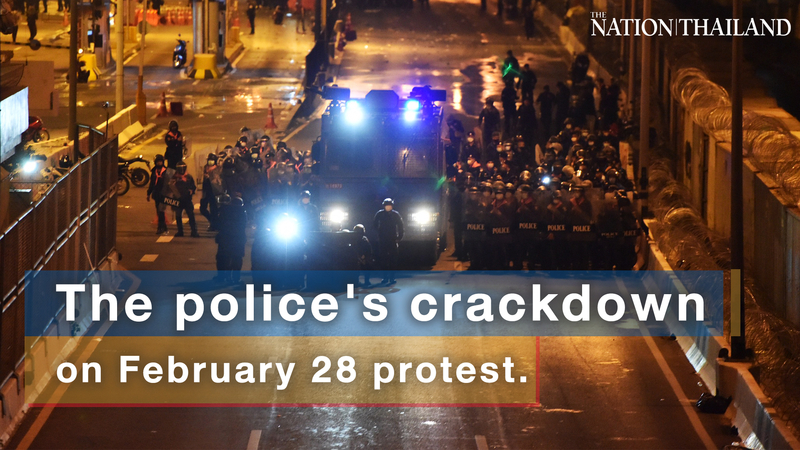 Some 1,500 protesters under the REDEM or Restore Democracy banner take to the streets on Sunday, which results in an ugly confrontation with police and several arrests.

Here is a timeline of events on Sunday:

3.15pm: A superintendent from the Phaya Thai Police Station inform the group of the Public Assembly Act, but the protesters bang utensils in response.

6pm: Riot police crackdown on protesters as they try to dismantle containers and barbed wire near the Veterans General Hospital.

6.10pm: A military officer warns protesters to stay away, but the crowd continues dismantling blockade until they arrive at the entrance of the 1st Infantry Battalion compound.

6.45pm: Male protesters confront riot police, while some lob firecrackers at the officers. Some protesters also use canvas to protect themselves from tear gas.

7.22pm: Clash erupts as protesters begin throwing objects, including firecrackers, at police who respond by shooting rubber bullets at the crowd.

7.44pm: Police officers say they will stop shooting if protesters retreat, but the crowd continues with its bid to enter the compound and make its way to Prayut’s residence.

8.30pm: Protesters vote via messaging app Telegram to call off the rally, though some continue confronting police.

10.30pm: Several protesters were arrested. According to the Thai Lawyers for Human Rights, at least 20 protesters including a 16-year-old had been arrested.

12am: Riot police shift to Din Daeng Police Station where protesters gather in support of those arrested earlier.