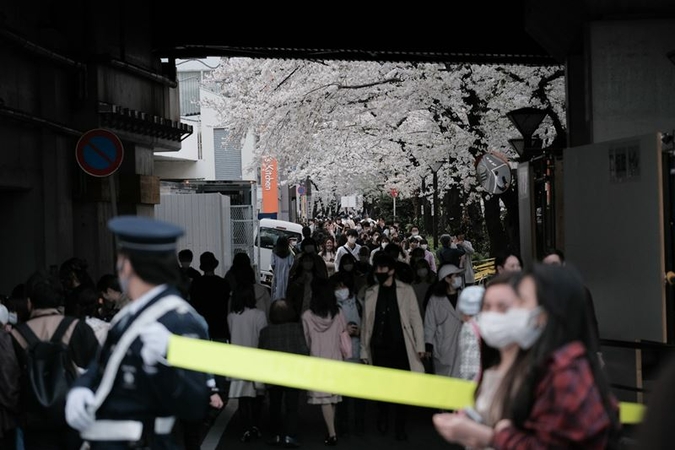 People walk past cherry blossom trees in bloom along the Meguro River in Tokyo on March 27, 2021. MUST CREDIT: Bloomberg photo by Soichiro Koriyama.

Tokyo is planning to seek a return to stricter virus measures as coronavirus cases in the Japanese capital hit a two-month high, less than three weeks after a state of emergency was lifted.

The capital recorded 555 cases on Wednesday, the most since early February, as officials feared a "rebound" in cases had begun to hit earlier than expected, amid an increase in virus variants. Tokyo Governor Yuriko Koike said she'd decide on formally requesting the measures after consulting with experts.

The extra steps, already imposed on the Osaka area, are broadly similar to the emergency declaration, itself much less strict than lockdowns seen in European capitals. Bars and restaurants in urban areas would likely to be asked to close early, and may face the threat of fines for non-compliance.

Osaka, the current center of the pandemic in Japan, has seen cases hit record highs since lifting its state of emergency in February. The prefecture has a population just over half that of Tokyo's, but saw 878 infections on Wednesday, topping those in the capital for almost two weeks. Experts fear that the sudden surge seen in Osaka could be repeated in Tokyo.

"Tokyo could go the way of Osaka," Shigeru Omi, the head of a panel of experts advising the government, said in parliament on Monday. "It takes a week or two after the lifting of the state of emergency for this impact to appear."

The slow pace of vaccine rollout is adding to concerns. Japan is set to begin vaccinating over-65s starting Monday, but supply constraints mean mass inoculations won't begin in earnest until May. Less than 1% of the population have received just one dose of vaccine.

Japan imposed the state of emergency in January, initially on Tokyo before expanding to other areas. Despite lacking the ability to enforce lockdowns, the steps mostly targeting bars and restaurants had immediate success in reducing new infections. But the pace of decline slowed, with new cases hitting a floor of around 300 in Tokyo in early March, even before the emergency was lifted.

While the raw numbers pale in comparison to other metropolitan areas worldwide struggling with the pandemic, the renewed surge is a concern for a country preparing to host the Olympics in just over 100 days. Osaka Governor Hirofumi Yoshimura said Wednesday he would cancel the Olympic Torch Relay in the prefecture, which was set to be held April 13 and 14, Kyodo reported.

The surge in cases will likely have political implications as well. The Osaka governor came under fire on social media as case numbers jumped, and a broader surge would probably further undermine support for Prime Minister Yoshihide Suga, who faces an election by October.