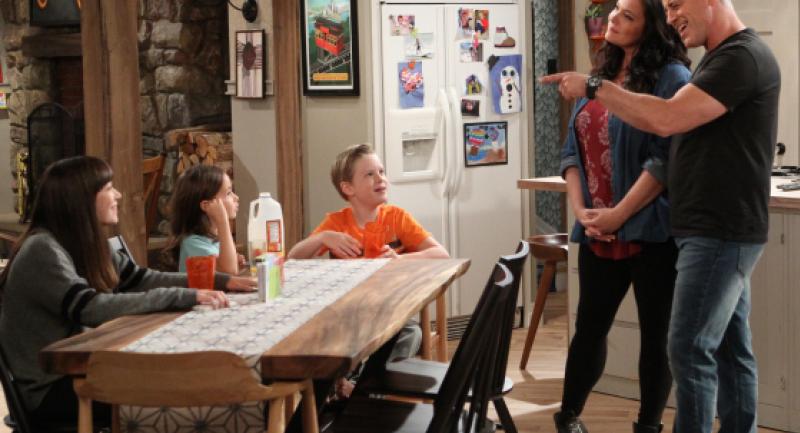 Matt LeBlanc, far right, returns to the small screen to nail the job at parenting in "Man with a Plan"

By MANTA KLANGBOONKRONG
THE NATION

STILL BEST remembered as Joey from his US TV sitcom “Friends”, Golden Globe winner Matt LeBlanc returned to the small screen last month in an all-new comedy family series, “Man with a Plan”.

Imagine the goofy Joey Tribbiani from “Friends” all grown up and married with three kids. In “Man with a Plan”, LeBlanc stars as Adam Burns, a contractor |who starts spending more time with his kids when his wife goes back to work and discovers the truth all parents eventually realise – their little angels are maniacs.

Adam feels fully equipped to take on more parenting responsibilities while his self-assured wife, Andi (played by Liza Snyder), returns to the workforce after being a stay-at-home mum for 13 years.

In the midst of it all, Adam’s older brother and business partner, Don, enjoys giving him terrible advice about how to run his family. But, with Andi’s encouragement and advice from a couple of equally stressed parents, Adam takes charge of his brood, lays down the law and discovers he’s going to “nail” this job.

We had a chat with the 49-year-old actor about this new role.

WHAT IS IT LIKE GOING BACK TO COMEDY AFTER DOING A FEW HOSTING JOBS, INCLUDING “TOP GEAR”?

Coming back to a multi-cam comedy format in front of a live audience is really fun. I didn’t realise how much I missed it until I got back into it again. It’s just a lot of fun and I really enjoy it. I’m an executive producer on “Man with a Plan”, so I met with the writers and came up with the concept with them. I’ve kind of been involved since the beginning. So, I guess, to answer your question, I felt good about it.

WHAT INSPIRED YOU TO CREATE ADAM BURNS?

He’s this guy who is struggling to keep the ship afloat. His wife wants to go back to work now that the littlest one is going to school full-time. I’m my own boss – I run a construction company with my brother. The two of us are in a position where I can kind of adjust my schedule to help my wife who wants to go back to work. I think that’s kind of fun.

WHAT KIND OF A FATHER IS ADAM?

I think he’s a good dad. He really loves his children. He puts his family first. I think sometimes he misses the life he had with his wife before the kids were born, which was more spontaneous and there weren’t many responsibilities. He maybe from time to time wishes it was the case still, but he loves his kids more than anything and would do anything for them. I don’t think he would change a thing. I think he’s a good dad. ARE THERE ANY PARENTING TIPS THAT THE AUDIENCE COULD TRY AT HOME?

Well, we did that one thing in the pilot where they installed a rolling Wi-Fi password at the house to ensure that the kids do their chores before they got the password. That was a smart one and people have asked me about that.

HOW DID BEING A FATHER OF A PRETEEN YOURSELF INFLUENCE HOW YOU PLAY THIS ROLE?

A little bit. I think it’s important to be loving with your children. I try to use the parenting tone that I use at home on the show, but with a comic twist. It’s all about where the funny is with this show.

We try to take themes about parenting that are very relate-able to a lot of parents and put a funny twist on it. Say the things that parents out there watching would like to say but can’t say.

SHARE SOME OF YOUR FAVOURITE MOMENTS WORKING ON THIS SHOW.

Today was a good one. Today CBS announced they were going to order more episodes. That was a nice moment!

We did a Christmas episode, so it was nice to see the family all kind of gelling together. That was fun.

It’s nice for me to see the actors that play the kids getting over their nerves in front of the audience and becoming braver and getting less nervous. They were coming into their own and discovering their characters.

“MAN WITH A PLAN” GOT SOLID PREMIERE RATINGS.

I’m glad that it seems like people are watching the show and relating to the show. It’s kind of new territory for me. I played a dad on “Episodes”, but we |didn’t really focus on that too much. I’m also a happily married guy, which I’ve never played before. I think a family show felt to me like the direction I wanted to|go to.

WHAT’S CHALLENGES WILL ADAM BE FACING IN COMING EPISODES?

There was one I had to make puppets for the school but I didn’t really want to do that. There was an episode where my wife has a male friend at work and I get jealous.

There was one where my brother and I had a dispute about an opportunity for our construction company to bid on a bigger job with a bigger developer building five homes.

It was a little out of our league so I wanted to bring someone in to help us with the presentation and my brother felt threatened, and that caused a rift between he and I.

HOW DO YOU FEEL ABOUT STILL BEING ASSOCIATED WITH JOEY TRIBBIANI?

I love that people still remember Joey. It seems like every year there’s a new |generation that’s discovering “Friends”. I’m very proud to have been a part of |that show. That was the highlight |of my career I don’t think I’ll ever be involved in something ever again that’s that successful. That doesn’t happen to anyone twice.

I love this new show, but “Friends” and playing the character Joey – I mean, I’m Joey’s biggest fan and I will always be his biggest fan. I love that guy.

He was so much fun to play. I learned a lot. I worked with great actors. We had great writing. It was received well and had a lot of support from the |network. There were a lot of things lined up to make that show exactly what it was. I will always be grateful for the opportunity.

“Man with a Plan” airs every Friday at 8pm on RTL CBS.