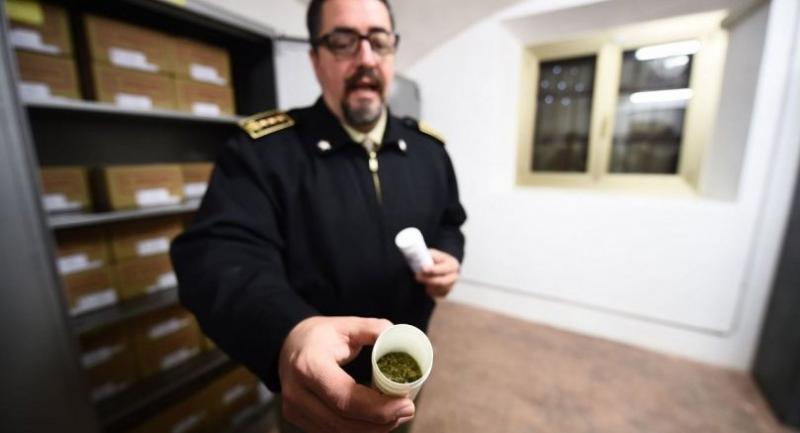 Antonio Medica, the colonel in charge of the Italian military's cannabis laboratory shows Marijuana produced at the military's 164-year-old chemical and pharmaceutical institute (ICFM), on January 27, 2017 in Florence. / AFP PHOTO

It’s every stoner’s nightmare: marijuana plants as far as the eye can see and not a spliff in sight.

“No, I have never tried it, and I don’t have any intention of trying it either,” says Antonio Medica, the colonel in charge of the Italian military’s cannabis laboratory in Florence.

As he inspects pristine plant buds destined to be cut and dried into a version of the drug for medical use, the veteran officer is nonetheless sure he is producing some really good stuff.

“Absolutely yes, I can assure you of that,” says Medica, who is wearing surgeon’s scrubs over his uniform.

“We have done the tests.”

In the doorway of a growing room that resembles a cross between a science lab and a steamy greenhouse, Medica explains how he ended up producing top-grade weed for Italy’s health service.

“One of my colleagues was joking with me the other day: ‘We spent 40 years trying to stop the troops smoking it in the barracks and now we are producing it ourselves’,” he says.

In reality, it is a serious business. The quality has to be reliable because the output from the military’s Cannabis Project Team is destined for patients, not potheads.

“Producing in this sterile, sealed environment is very important,” Medica explains. “That is the only way you can ensure a consistent product and one free from the toxic materials, particularly heavy metals like mercury, that the plants can easily absorb when grown in fields.”

The first batches of made-in-Italy pot have just arrived in pharmacies.

Its production is just one of the activities of the military’s 164-year-old chemical and pharmaceutical institute (ICFM). The body prides itself on the fact that its cannabis was registered as a pharmaceutical product by Italy’s medicines agency in September 2015.

As such, it is very different from most of the cannabis consumed around the world.

This is because the component that gets recreational users high, tetrahydrocannabinol (THC), is less useful to doctors than another active ingredient, the anti-inflammatory cannabidiol (CBD).

In simple terms, Italian military dope has less THC but more CBD, compared to its street-bought equivalent, or even when compared with the legal, Dutch-made supplies on which Italian physicians previously relied.

An estimated 2,000-3,000 Italians currently use medical cannabis for purposes such as relief from multiple sclerosis pain or combating nausea after chemotherapy.

Italy’s guidelines also highlight its possible use for glaucoma and in helping to restore the appetite of anorexia and HIV patients.

The latter application depends on the same reaction that recreational marijuana users experience when they get the “munchies.”

Italy authorised the consumption of cannabis for medical reasons in 2007.

But take-up has been slow with doctors reluctant to consider it an option because of uncertainty over the circumstances in which it can be used, dosages and how to administer it.

“They were afraid of side effects, afraid to take the responsibility, afraid about everything,” says Pierluigi Davolio, a Florence pharmacist.

Davolio estimates he is now dispensing around 300 cannabis preparations per year as awareness and confidence grows amongst medics and patients, some of whom would have previously risked self-medicating with dealer-supplied or home-grown stocks.

He has no doubt that cannabis has its place on his shelves.

“One thing it works well for is fibromyalgia, a condition for which there is no really effective medicine,” he explains, referring to a disorder that causes joint pain.

“We had a patient here who had sold her car because she was in too much pain to be able to drive. As soon as she started [taking cannabis], she was back at the garage saying she needed it back.”

With 100 plants yielding eight kilogrammes of final product, the ICFM plans to have four growth chambers on stream soon and to produce around 100kg in total this year.

Medica anticipates being able to expand output and to produce different types of medical cannabis as demand grows and feedback identifies which compound-mix works best for specific conditions.

“We are still in a very experimental phase,” Davolio says.

Growing each plant to the harvesting point takes three months, compared to a year outdoors in Italian conditions.

Controlled cycles of powerful artificial light accelerate the process. The growing rooms are irrigated, kept between 20-28 degrees Celsius and frequently resonate to the strains of Mozart, thought to be helpful to plant growth.

After being processed into a texture resembling dried parsley, the cannabis is treated with gamma rays to kill off pathogens before being sold to pharmacists at 6.8 euros (Bt260) per gram.

Lower costs and guaranteed supplies were two of the motivations for the project and the military makes only a small margin for reinvestment in further research, according to Medica.

“We’re not in this for business,” he says.

For the moment, patients are advised to prepare the drug in boiling water or use a vapourising device to be sure they are ingesting the required dose.

Health workers recognise that the crossover from recreational marijuana means many will bake it in cookies or roll joints to smoke it.

They shouldn’t, says Medica. “Studies have shown that burning degrades the active ingredients and increases the risk of side effects, so that is strongly discouraged.”