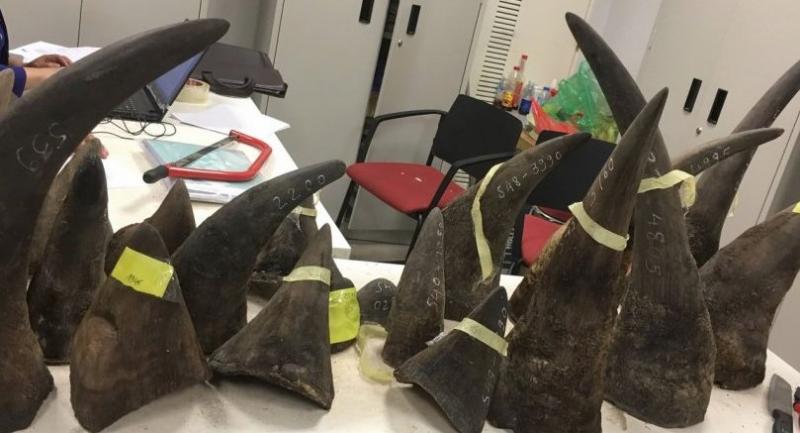 eized smuggled rhino horn are displayed at a customs office in Hanoi on March 14, 2017. Vietnam police seized more than 100 kilograms of rhino horn smuggled into the country in suitcases from Kenya on March 14.//AFP

Hanoi - Vietnam police seized more than 100 kilograms of rhino horn smuggled into the country in suitcases from Kenya on Tuesday, the latest illegal haul in the wildlife trafficking hub.

Vietnam is a hot market for rhino horn, believed to have medicinal properties and is in high demand among the communist nation's growing middle class.

The country is a popular transit point for illegal animal products, which often move from Africa through Vietnam to other parts of Asia.

The latest haul of the prized animal parts at Hanoi's Noi Bai International Airport were found hidden in luggage on a flight from Nairobi, according to the official publication of the Hanoi police department.

Photos showed the huge haul in suitcases and stacked on tables.

Conservationists have warned that rampant demand for rhino horn in China and Vietnam, where it is falsely believed to cure cancer and treat hangovers, is decimating African rhino populations.

A single kilogram of rhino horn can fetch up to $60,000 on the local market, according to reports. Britain's Prince William delivered an urgent plea in Vietnam in November to end wildlife trafficking to save critically endangered species such as rhino, elephants and pangolins.

Wild rhino populations have dwindled to just 29,000 from half a million at the beginning of the 20th century, according to the International Rhino Foundation.

Trade in rhino horn was banned globally in 1977 by the Convention on International Trade in Endangered Species of Wild Fauna and Flora (CITES).