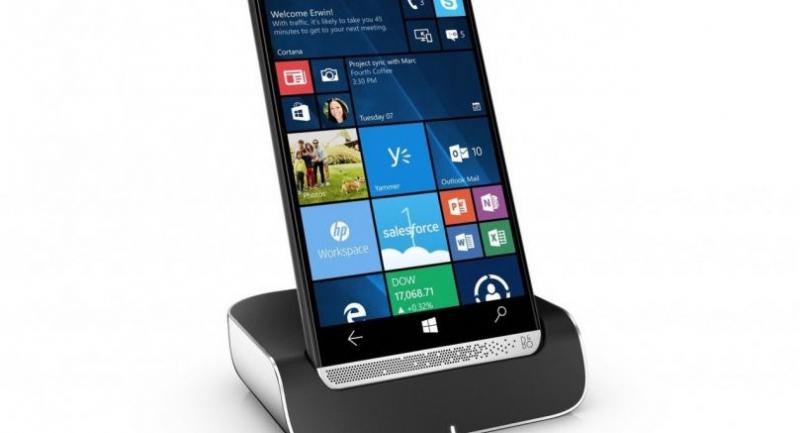 HP makes the Elite x3 connectable to a keyboard, mouse and monitor

With the HP Elite x3 smartphone, you’ve already got a desktop or laptop computer running Windows 10. This clever design makes things a lot easier for people who work on the go. Mind you, it costs Bt30,000.

The “x3” signifies the three configurations – phone, desktop and laptop – but to use it as a laptop, you need to also buy the HP Elite x3 Lap Dock, which looks like a laptop but doesn’t have a CPU. It just mirrors your phone’s apps and functions.

Using the Elite x3 as a desktop computer is a given, though, because the phone comes with an HP Elite x3 Desk Dock for connecting a monitor, keyboard and mouse and even an Ethernet LAN cable.

The phone makes use of a fast USB-C port and the Continuum component of Windows 10 to connect to the monitor, mouse, keyboard or a mirrored laptop.

Business executives and other high rollers who want to double down on computer time without having to switch between machines need only save their work in cloud storage, since the Elite x3 has just 64 gigabytes of internal storage.

Although a microSD expansion slot is provided, it’s shared with the second nano SIM. You can use it for one function or the other, not both. As a smartphone, this is quite a powerful unit, and nice-looking in black, too. The multi-touch display is a large 5.96 inches with 2,560x1,440 pixels of resolution, protected behind anti-reflective Corning Gorilla Glass 4.

The power comes from a Qualcomm Snapdragon 820 quad-core processor running at 2.15GHz. Working memory (RAM) is a generous 4GB. For graphics, a Qualcomm Adreno 530 GPU is your able servant.

I tested the device with the Microsoft Office applications that come with Windows 10 Mobile – Word, Excel and PowerPoint – and got through my tasks quickly and smoothly, with the same speed and confidence shown for games, videos and music files.

Since the Elite x3, like most Windows 10 mobile phones, is designed for business uses, there’s a no-nonsense look and feel to it. In place of attractive wallpaper and themes, you have a minimalist tile display of the apps and functions most commonly used, awaiting your tap.

Still, this “business phone” comes with multimedia apps, like Grove Music and Movies, and the sound is good too, thanks to an audio system and speakers designed by B&O Play. Two front-facing 0.6-watt stereo speakers and HP Noise Cancellation software ensure that phone conversations are easy to hear.

The 4G LTE connection is a fast 802.11ac Wi-Fi that, as I found on TrueMove H’s LTE network, will download apps and back up files as if the cops were on their way. The Ookla Speedtest app measured downloads at 52.52Mbps and uploads at 14.69Mbps.

I got connected in a hurry through a Linksys EA8500 router and could fetch files from my other home computers with no problem.

Managing the dual-SIMs issue isn’t difficult. I designated one SIM for data and it was automatically set to a 4G connection, while the other was ready for a 3G connection. The home screen shows tiles for using either SIM to make phone calls and send SMS, all very convenient.

The security seems pretty sound. The 2.4MP “iris camera” integrated into the front-facing camera will check the irises of your eyes before unlocking the phone, and there’s a fingerprint reader at the back, below the main camera. In my test, both of these security functions worked well.

The cameras do a nice job. The main camera is 16-megapixel resolution and uses phase-detection auto-focus. It’s capable of shooting Full HD video at 30 frames per second. The front-facing camera is 8MP. Both can get decent images in low light and overall produce good quality for a mobile device.

Configured as a desktop computer, the phone handily connects to a monitor, keyboard and mouse using the provided Desk Dock.

- Storage: 64GB, expandable with a microSD card up to 2TB