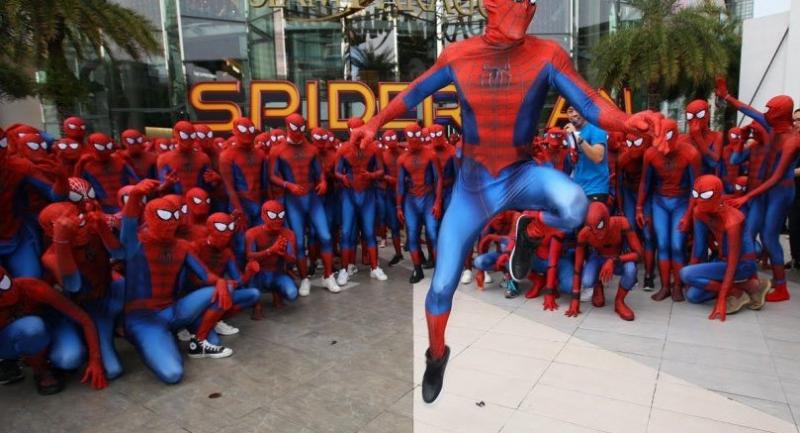 To get fans all revved up for the new Spider-Man movie, “Spider-Man: Homecoming”, which opens this Thursday (July 6). Sony Thailand recently organised a “Spider-Man fan day at Siam Paragon and invited more than 200 Spideys to take part.

The superheroes came in all shapes and sizes, from a tiny tot to teenagers and adults. Also taking part were four young celebs –Nattasit Kotimanasvanich, Weerakaniz “Mac AF6” Karnwatanagool, Nattapong “Dew The Star 9” Promsign and Kay Lertsithichai, the netidol from the page Kayavine, which has more than 200,000 followers.

The franchise reboot starts with young British actor Tom Holland in the title role. Holland made his theatrical debut as Billy Elliot but will be better known to Thai fans for his role in the movie “The Invisible” as the eldest son of a Spanish couple (played by Ewan Macgregor and Naomi Watts) who are staying in Khao Lak, Phang Nga when the Boxing Day tsunami hits.

The film starts after Peter Parker (Holland) returns home from his experience with the Avengers in “Captain America: Civil War” to live with his Aunt May (Marisa Tomei), under the watchful eye of his new mentor Tony Stark (Robert Downey Jr). Peter tries to go back to his normal daily routine but is distracted by thoughts of proving himself to be more than just your friendly neighbourhood Spider-Man. When the Vulture (Michael Keaton) emerges as a new villain, everything that Peter holds most important will be threatened and he will go into battle to save it.