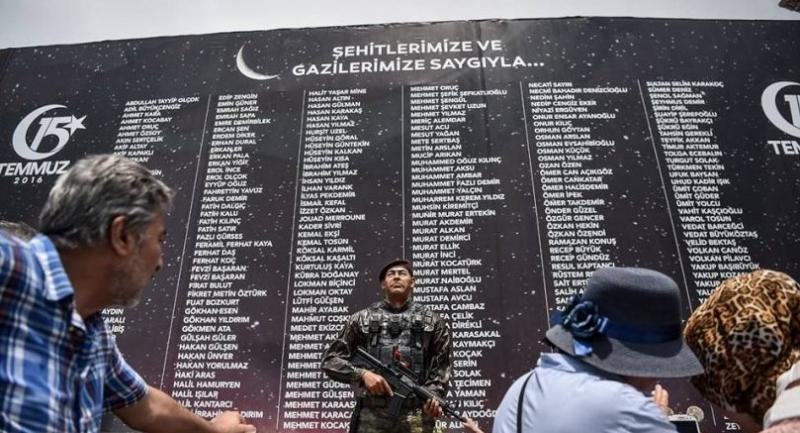 People look at the statue of Omer Halisdemir displayed on July 14, 2017 in Istanbul, in front of a memorial with the names of people killed last year during the failed coup attempt . /AFP

ISTANBUL - Turkey announced the dismissal of another 7,000 police, soldiers and officials on Friday, a new purge on the eve of the one-year anniversary of a military-led coup that failed to topple President Tayyip Erdogan.

July 15 has been declared an annual national holiday of "democracy and unity" and the authorities want people to see the foiling of the putsch as a historic victory of Turkish democracy.

Friday's measures, however, mean that 50,000 people have been arrested and a further 100,000 sacked in response to the thwarted bid to overthrow Erdogan.

Some 7,563 people were fired in the latest cull, the state-run Anadolu news agency reported, with nearly 350 retired army members also stripped of their rank. Hurriyet daily reported that 2,300 police were dismissed.

Saturday will see Turkey hold a major programme of events to mark the coup attempt, blamed by the authorities on US-based Muslim preacher Fethullah Gulen.

The decree, published late Friday in the official gazette, said those sacked were "linked to terror organisations, or groups determined to have been acting against the state's national security".

A former Istanbul governor was among those dismissed. The decree also stripped medals from Hakan Sukur, the retired Galatasaray and Turkey national team footballer.

Once one of the country's top sporting heroes, Sukur powered Turkey to third place in the 2002 World Cup where he scored the fastest goal in the competition's history.

He later served as a ruling party MP but then fell out with the authorities over his links to Gulen. Now believed to be living in the United States he is the subject of a Turkish arrest warrant.

Gulen on Friday again denied any involvement in what he called a "despicable putsch," and called on Ankara to end its "witch hunt" of his followers.

"Accusations against me related to the coup attempt are baseless, politically motivated slanders," Gulen, who lives at a compound in rural Pennsylvania, said in a statement.

"I reiterate my condemnation of the despicable putsch and its perpetrators," he said, while decrying a government "witch hunt to weed out anyone it deems disloyal" to Erdogan "and his regime".

The attempted putsch came when a disgruntled faction in the army sent tanks into the streets and planes into the sky in a bid to oust the president.

War planes bombed Ankara and tanks surged into the streets of Istanbul in a night of violence that left 249 people dead. The bid was swiftly thwarted as the authorities regrouped and people poured into the streets in support of Erdogan.

Turkey insists the post-coup crackdown is necessary to tackle the threat they say is posed by the Gulen movement, but activists and Western governments have criticised it as excessive.

Gulen called for an independent international investigation of the coup attempt, saying "hundreds of thousands" of innocent Turks had been punished simply for suspected links to him.

"The government's treatment of innocent citizens during the past year is dragging Turkey into the category of the countries with the worst record of democracy, the rule of law and fundamental freedoms in the world," he said.

Saturday's events begin with a special session of parliament, after which Erdogan will take part in a people's march on the bridge over Bosphorus that saw bloody fighting on the night of the coup, since renamed Bridge of the Martyrs of July 15.

At midnight local time (2100 GMT) people across Turkey will take part in "democracy watches", rallies commemorating how crowds poured out into the streets.

Erdogan will return to Ankara and give a speech to parliament at 2:00 am -- the time it was bombed on the night of the attempted putsch.

A monument to those killed will then be unveiled outside his palace in the capital as the dawn call to prayer rings out.