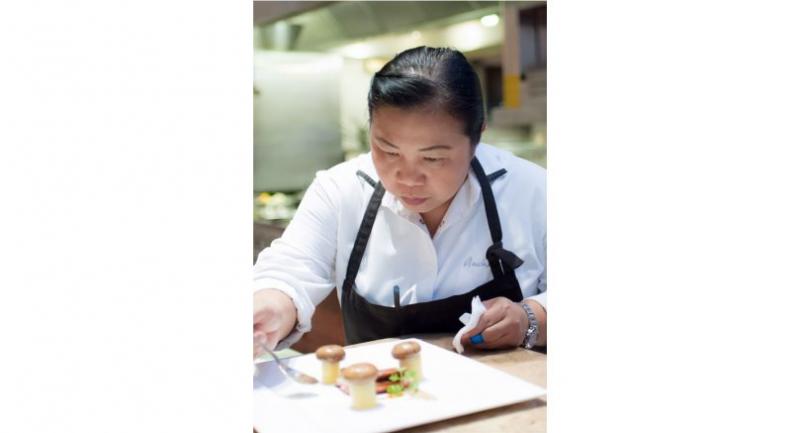 Three talented female chefs take over the kitchens of 137 Pillars Suites & Residences in Bangkok from July 27 to 30 for a gastronomic journey through the timeless realm of Thai cuisine.

Next Thursday (July 27), Chef Anchalee “An” Ponrungsit will prepare a five-course set dinner menu on the theme “Avant-garde cooking with a Thai twist”.

Anchalee, who holds a degree in culinary art management, started her culinary journey in 1993 at The Regent Bangkok as an apprentice in the pastry & dessert section before moving to One Convent Road Restaurant, Coffee Beans Café & Restaurant and Thai Siam Makro, before returning to continue her journey as a Commis I at Biscotti Restaurant at her alma mater, now the Four Seasons Hotel Bangkok. She worked her way up to become Chef De Cuisine at Madison in 2016, during this time the hotel was rebranded from Four Seasons Hotel Bangkok to Anantara Siam Bangkok. She has participated in the Word Gourmet Festival and worked with several notable chefs including David Kinch from Manresa and Markus Arnold from Meridiano Berne Switzerland. She joined 137 Pillars Suites & Residences Bangkok as Executive Sous Chef in November 2016.

On July 28, it’s the turn of Chapornpat “Jib” Dapachutisan, whose culinary credentials include the Mandarin Oriental group, both in Bangkok and in London and the 2-Michelin Star Restaurant in Anne De Bretagne Hotel in France. Chapornpat has also been a private chef for the German Embassy in Bangkok and is currently executive chef at the Relais & Chateaux’s Wanakarn Beach Resort and Spa in Phang-Na, near Phuket. She’ll l blow guests’ minds away with “An explosion of flavours of Thai and French fusion cuisine”.

On July 29, chef Supanut “Ann” Khanarak will bring long-lost Thai recipes back to life in a carefully crafted five-course set dinner menu, Supanut trained at Dusit Hotel &Resort, Pattaya, in 1990 and received a certificate of Kitchen Operations from The School of International Hotel and Tourism Business Centre in 1991. Her passion for cooking took her to Australia, and in 1998 she started her career as a chef at Sailor Thai Restaurant in Sydney. Since her return home, she has worked as Senses Bangkok Restaurant, The Metropolitan Bangkok as a Chef de Partie and Nata Restaurant Bangkok, where she played an important role in the menu design, as well as training budding chefs of the future. She is currently the chef and co-owner of Bangkok Bold Cooking Studio.

All three chefs come together on July 30 for “The Grand Finale”, a six-course set dinner menu, which guests shouldn’t miss!

Guests can arrive in style in ‘Louie the London Cab’ which has been fully customised for the hotel, with scheduled pick-up times from Promprong Bangkok Sky Train (BTS) Station/Emquartier Shopping area. Book a table at (063) 187 6209, email: benchamaporn@137pillarsbangkok.com, or visit www.137pillarsbangkok.com.