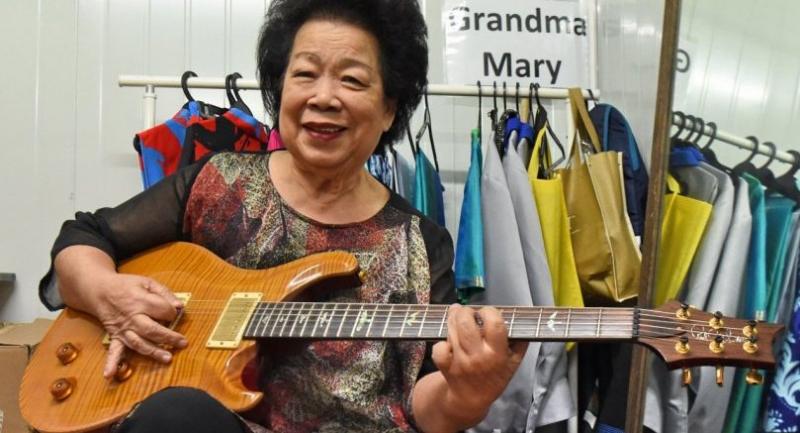 This picture taken on August 5, 2017 shows Mary Ho, also known as Grandma Mary, posing with her electric guitar during a rehearsal in Singapore. // AFP PHOTO

Mary Ho's late-flourishing career will reach its zenith Wednesday when she performs in front of a huge crowd at Singapore's National Day Parade, marking 52 years of the city-state's independence.

Grandmother of seven Ho only started playing the guitar at 60, fulfilling a lifelong dream to learn the instrument. She initially taught herself from a book with an acoustic and was content strumming along and singing.

But when a friend introduced her to rock star Carlos Santana's classic track "Samba Pa Ti" about a decade ago, she decided to seek some professional tutoring to shift things up a few gears.

"It was too difficult (to learn on my own) so I found a teacher," she told AFP.

"But the teacher looked at me and said 'Oh I've never taught anyone your age before'."

Despite not knowing how to read music, Ho was determined to learn her favourite song and practised up to three hours a day to get the hang of it.

Since then, she's amassed a collection of more than 20 guitars, recorded her own album of Latin music and is often in demand for charity gigs.

A video of Ho playing rock classic "Need Your Love So Bad" has more than 1.1 million views on YouTube.

In fast-ageing Singapore, Ho is a poster child for how to remain active when elderly, and has featured in various campaigns encouraging senior citizens to stay active.

She admitted to feeling a little anxious ahead of Wednesday's performance before a crowd of 27,000 at the parade, which features a military tattoo before a festive show featuring local stars.

"Being my first time for such a large performance, I naturally feel very nervous," she said.

Asked if she was exhausted from all her activities, Ho simply laughed.

"Maybe it's just my nature, it's the love of doing things, learning things... I don't ever get tired," she said.