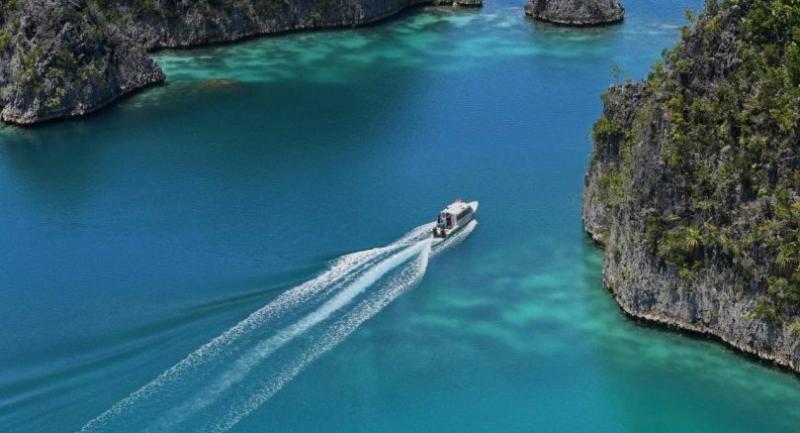 Stretching across 67,000 square kilometres in Indonesia’s far east, the postcard-perfect Raja Ampat islands might be about as close to paradise as visitors can find.

A patchwork of white-sand beaches, colourful coral reefs and turquoise water, the islands of Raja Ampat are set to be Indonesia’s next tourism hotspot – but locals fear the government is failing both them and the environment in its development push.

Stretching across 67,000 square kilometres in Indonesia’s far east, the picture-perfect islands might be as close to paradise as visitors can find.

“It’s amazing. We’ve been to millions of islands and I would say it’s the most beautiful one,” Canadian Angelika Redweik-Leung says at a lookout above the Pianemo island group.

Raja Ampat, which means Four Kings, is made up of 1,500 islands and is home to about 1,400 varieties of fish and 600 species of coral – making it one of the most biodiverse marine habitats on earth.

Indonesia’s government is intent on turning the area into a tourism hotspot, building hotels, restaurants and investing in new harbours.

But on a palm-fringed island about two hours boat ride from Raja Ampat’s capital Waisai, villagers still live in simple huts that lack electricity and clean water, while the nearest high school is scores of miles away.

Locals say they have seen no improvements to their lives despite the dramatic rise in visitors. According to government estimates around 15,000 tourists now come to the area each year – up from less than 5,000 in 2010.

“They’ve hurt us indigenous people. They took our land, our water and our forest. We feel betrayed,” Paul Mayor, chief of the island’s Byak Betew tribe, says of the government’s tourism drive.

“That’s our land, our ocean, which now is a world-class tourist destination, but we’ve gained nothing from the influx of tourists,” he adds.

The 4,200-tonne Caledonian Sky ran aground near the island of Kri carrying 102 passengers and 79 crew, but half a year later no one has been held accountable. Researchers from the University of Papua, who assessed the impact of the accident, said restoring the damaged reef could cost as much as $16.2 million.

The head of tourism for Raja Ampat, Yusdi Lamatenggo, said the company operating the boat – Noble Caledonia – will be summoned to appear in court soon but so far they have not accepted responsibility or paid any damages.

In the meantime, he says, steps are being taken to prevent further accidents by establishing clearly demarcated cruise ship routes and world-class harbours.

But the accident has fuelled feelings of mistrust and exclusion often felt by Papua’s indigenous Melanesian population. The resource-rich region was annexed by Jakarta in 1969 and most Papuans feel they have not been given an even share of its natural riches.

The military retains heavy influence in the region and regularly stifles dissent.

After taking office in 2014, president Joko Widodo pledged to speed up development in Papua, but many locals insist they have been forgotten.

“There has been no change,” says Ariel Fakdawer, head of Saukabu village in Raja Ampat.

“The yearly Raja Ampat festival, for example, attracts thousands of tourists but we gain nothing from that. We are still poor, but the organisers of such festivals, outsiders, they have made a fortune,” he adds.

Indigenous groups say they need communication satellites, electricity, better infrastructure, and the right to govern themselves by customary law.

“The government never fulfils our needs because they don’t understand what we want,” chief Mayor says.

“I believe the government has to approach us by bearing in mind our cultural needs. They have to talk to us indigenous people.”

But not everyone is against the rush to open up Raja Ampat to the world.

Villager Medzke Karoswaf explains: “This is a modern world. We cannot live isolated like in a cave forever. We have to be open-minded. Like it or not, we don’t live alone in this world.”