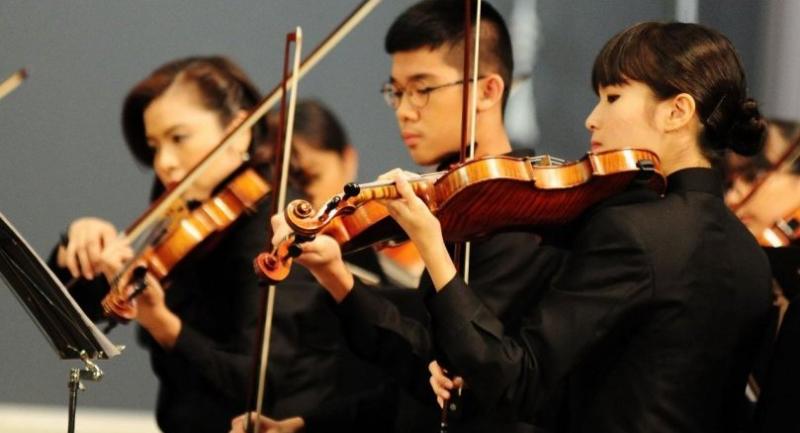 In remembrance of His Majesty the late King Bhumibol Adulyadej, who was also a talented musician, Boon Rawd Brewery and Singha Corporation again joined with Silpakorn University’s Faculty of Music to host the fourth edition of the “4th Pro Musica Junior Camp”.

The objective is to search for young musical talents from around the country to participate in a one-week string orchestra training camp and to practise the late King’s royal compositions.

This year, 21 musical talents were selected and offered an opportunity to perform three royal compositions – “Blue Day”, “Alexandra”, and “Love in Spring” –as well as Mozart’s “Requiem in D minor K.626”.

At the end of the musical training project, the 21 young musical talents performed as a chamber ensemble in a requiem to pay tribute to the late King via Facebook Live. The performance was recorded for future broadcast on TV channels and on social networks. On this occasion, the young musicians were also awarded certificates by Vudha Bhirombhakdi, chairman of Boon Rawd Brewery Co Ltd, at the main auditorium at Boon Rawd Brewery.

“This year, musical workshops and activities were held earlier in six provinces; Chiang Mai, Songkhla, Prachuab Khiri Khan, Nakhon Ratchasima, Phuket, and Buri Ram, to search for young musical talents to join our fourth edition. Finally, a total of 21 participants were selected and awarded with a one-week musical training camp in Bangkok, facilitated by renowned national and international professors and musicians, in preparation for a requiem in remembrance of the late monarch,” said Nathawan Teepsuwan, corporate communications director of Boon Rawd Brewery.

“Over the past four years, we have seen some students returning to the camp and showing off their immense musical development. Each year, these students have learnt discipline and earned experience. Many young students have potential to become professional musicians in the future if they keep practising. In a very short period of time, they could perform much better than expected,” added Dr Tasana Nagavajara, director of the Pro Musica Junior Camp.

The camp director added that it had been a difficult year as Thais continue to mourn the loss of King Bhumibol. Furthermore, Admiral ML Usni Pramoj, former privy councillor, passed away this year. He was not only the camp’s honorary counsel but also the musician who rearranged the royal compositions for the string orchestra, which is seen as lesson for the young musicians at the camp to learn from.

“We are continuing the camp with our best efforts as a way of expressing our deep respect and remembering His Majesty as we come together to pass on His Majesty’s royal compositions to the young generation and to apply the wisdom messages and inspirational thoughts from his music to our daily life,” he said.

The camp has welcomed veteran musicians such as Kittikhun Sodprasert, renowned composer, and other professors from leading music institutes. This year has also seen special guest, Roland Baldini, renowned violinist from Vienna, as a special mentor. Baldini used to teach Tasana and also performed with Admiral ML Usni.

Members of the public are invited to watch and listen to this year’s 21 young musical talents from the 4th Pro Musica Junior Camp by Boon Rawd Brewery performing in a requiem in remembrance of the late King via https://www.facebook.com/ProMusicaJunior.