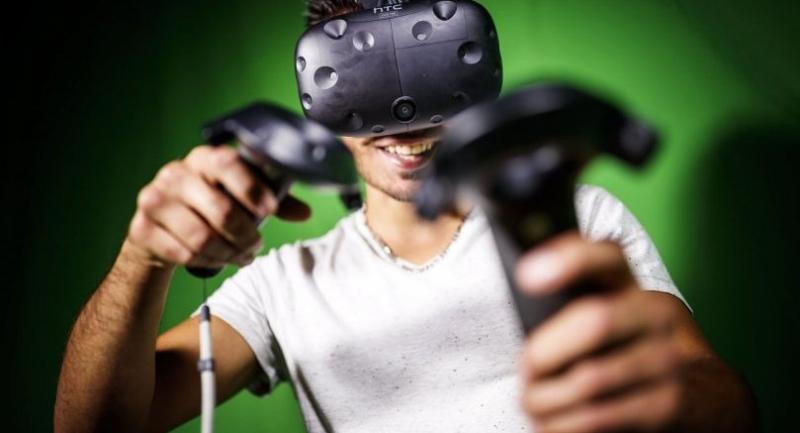 A staff member wearing virtual reality (VR) goggles and controllers demonstrates a VR painting experiment in front of a green screen during a media preview one day prior to the Design Night in Neuchatel, Switzerland, 18 October 2017. EPA

VR goggles block the real world from the user’s sight. For example, even if the gadget displays shaky images on a train car, the viewer’s body actually does not shake, resulting in motion sickness for some people due to that sensory gap. Makers are tackling this problem, but have yet to find a decisive solution.

The gadgets also need to be lighter to help users forget they are even wearing them, and some products are said to quickly make users sweat within the gadgets if they are used for an extended period of time in summer.

“Figuratively speaking, the current VR products can be compared to the large mobile phones of the 1980s, which were slung over a person’s shoulder,” said Prof. Kiyoshi Kiyokawa of the Nara Institute of Science and Technology. “Further improvements should be made to popularize them.”

Manufacturers have been engaged in the VR development race, as they have found great room for technological innovations and view the market as promising. The battle for market share is growing fiercer as investments are aggressively made by information technology companies in the United States and makers in South Korea and Taiwan. However, it is said that none of these companies can dominate at a level where their technology can be recognized as the global standard.

In Japan, universities and other entities have been ahead of other countries in researching virtual reality. Sony has taken the lead by releasing the PSVR virtual reality game system. The company plans to promote sales by taking advantage of the fact that it is fully compatible with the PlayStation 4 home video game console, which has sold over 60 million units across the world.

Many Japanese electronic appliance makers lost out in global competition over personal computers and smartphones, and stopped manufacturing such items — a bitter experience for them.

However, there seems to be a chance for Japanese firms to regain their position via VR terminals.Speech