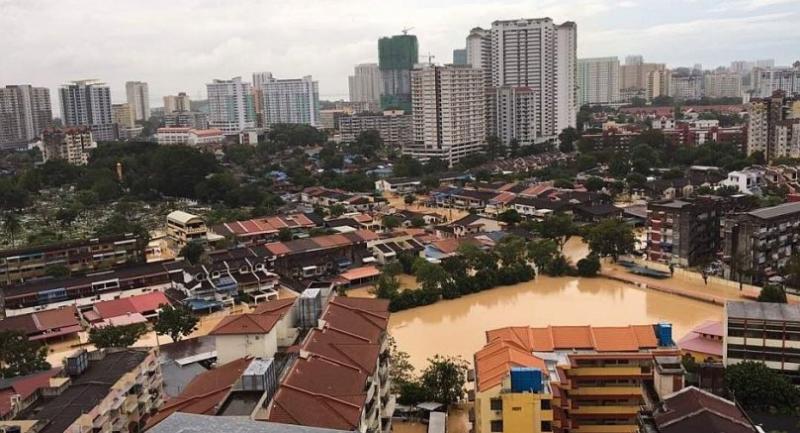 George Town : The flood situation in Penang has worsened with flood waters rising to about 10 to 12 feet in Bandar Baru Air Itam, reaching the roof of the landed houses there in the wee hours of Sunday.

Paya Terubong near the former Lee Rubber factory was not spared from the floods.

Netizens posted that areas such as Lintang Sungai Ara and Gurney Drive, which were never flooded before, or had not been flooded for more than 30 years, were now inundated.

From the Facebook page of the Penang Island City Council (MBPP), it said roads that were flooded since 7am on Sunday were Jalan Masjid Negri, Jalan Perak in front of flat Taman Abidin, Jalan Makloom, Jalan Free School, Jalan Terengganu, Jalan Sungai Pinang and Lilitan Stadium.

Other areas that were flooded included Jalan Datuk Keramat in front of Penang Times Square and Jalan Transfer.

Many roads especially those located by the hills, such as Jalan Tun Sardon, Jalan Batu Ferringhi and Jalan Paya Terubong were not passable due to fallen trees.

Lim said that the situation in Penang was getting worse as the water level rose and winds were strong.

He urged Penangites to be patient and stay safe, as the state government will try its best to help those in need.

A family in Desa Damai here had to send off a loved one using a boat after the area was inundated by floods Sunday.

Video clips of the funeral have also gone viral, showing the casket being floated on the water in a boat on Jalan Padang Lalang.