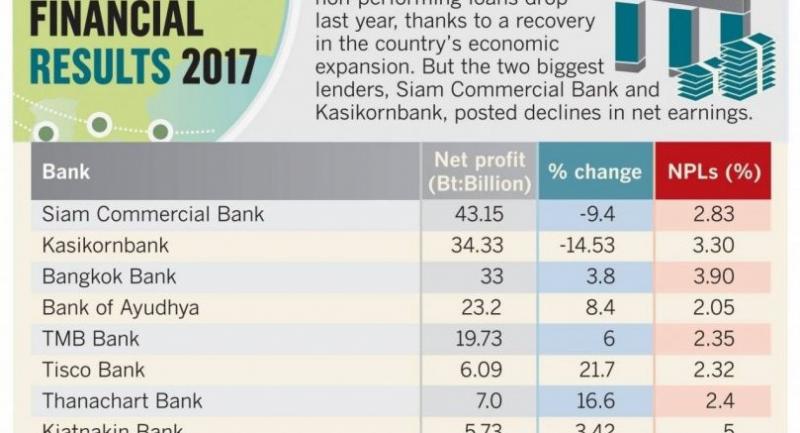 COMMERCIAL banks have expressed confidence that their financial results this year will show sustained growth after most of them announced increases in net profit last year.

Results from the listed commercial banks that have reported on their performance for 2017 indicated that most notched strong profit growth for the year, especially CIMB Thai Bank, with net earnings of Bt384.9 million against a net loss of Bt629.5 million in 2016.

However, the two biggest commercial banks, Siam Commercial Bank and Kasikornbank, reported declines in 2017 net profit of 9.4 per cent and 14.53 per cent, respectively, from the end of 2016. KittiphunAnutarasoti, president and chief executive officer of CIMB Thai Bank, said that the bank’s net profit came in better than that of the previous year, attributing the improvement to a 1.8 per cent year-on-year growth in operating income and a 19.5 per cent year-on-year drop in provisions. Other operating expenses rose by 2.6 per cent.

Siam Commercial Bank and its subsidiaries announced that net profit dropped 9.4 per cent from 2016, primarily due to higher prudential provisions to align existing expected loss principles to those required under new accounting standard effective in 2019, as well as a 11.6 per cent rise in operating expenses. The latter was due mainly to the bank's investment in digital banking technology to expand its customer base, president and chief executive officer Arthid Nanthawithaya said.

He said the bank had moved into the digital arena and expanded its retail customer base through mobile banking and new payment technologies such as QR codes, and such efforts would continue as the bank sought to further expand the customer base.

Predee Daochai, president of Kasikornbank, said the bank’s 2017 net profit dropped 14.53 per cent from the previous year, with its operating profit dragged down by a provision expense and income tax expense of Bt90.48 billion, an increase of 1.05 per cent over the previous year. Other operating expenses increased by up to 3.94 per cent, resulting in a cost-to-income ratio of 42.31 per cent.

TMB Bank’s chief executive officer Piti Tantakasem said that the bank’s net profit growth increased 6 per cent in 2017 from the previous year. It benefited from an 8 per cent gain in its home loan business.

Its net profit expansion came primarily from retail lending backed by sustained growth in mortgages as the bank improved its processing for more efficient turnaround times. In terms of the commercial segment, corporate loans continued to grow while loans to small and medium-sized enterprises (SMEs) still showed a slowdown. However, the bank saw signs of recovery in this segment in the fourth quarter.

“The improvement in TMB’s operating performance in 2017 reflected the results of our focus on delivering the products and services that meet the real needs of customers under the concept of a ‘Need-based Bank’ and ‘Simple & Easy’,” he said. “In 2018, TMB aims to expand transaction deposits through the retail and small SME customer base. Digital capability will also be enhanced to better serve the growing numbers of digital banking customers while maintaining prudent management of asset quality to ensure quality and sustainable growth.”

Bank of Ayudhya Plc, which showed net profit growth of 8.4 per cent in 2017 from the prior year, is confident the economy will still record strong growth in 2018, with a broad-based expansion in gross domestic product of at least 4 per cent expected. Sustained growth in the export and tourism sectors, together with the proposed acceleration of infrastructure investment, will serve as key catalysts for loan growth.

With a favourable operating environment, along with strategic executions under its new Medium-Term Business Plan (2018-20), the bank targets loan growth of 6-8 per cent for the year, president and chief executive officer Noriaki Goto said.