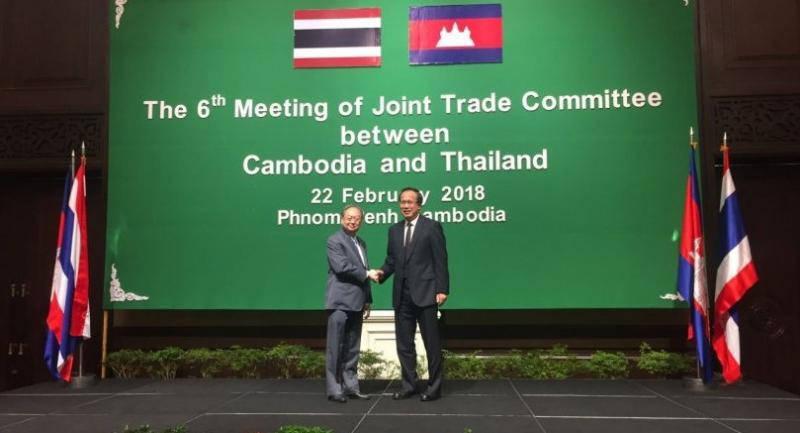 CAMBODIAN Commerce Minister Sorasak Pan expects the value of Thai direct investments in his country will double by 2020, driven by expansion in services, agricultural processing, small and medium-sized enterprises and restaurants.

Cambodia also expects to see a more balanced trade between the two countries under a target for bilateral trade to reach US$15 billion by that year, he said. Cambodia is running trade deficits with Thailand.

“We hope the trade between both countries will arrive at a balance under plans to boost our exports of agriculture products to Thailand and to promote investment opportunities for Thai businesses in Cambodia,” Sorasak Pan said in an interview with The Nation after the signing of two memorandums of understanding (MOU) with Thai Commerce Minister Sontirat Sontuirawong yesterday.

“Cambodia also no limit of on capital outflows and this enables investors to send profits back to their country. This is a practical benefit for foreign investors wanting to expand their investments in our country.”

The two MOUs concern a growth strategy for border provinces under increased economic links and cooperation between both sides’ departments of international trade promotion and general directorates of trade promotion.

Sontirat said, after the signing of the agreements, that both documents would support growth between the countries and secure the US$15 billion trade target by 2020. The minister said the neighbours would set up a committee aimed at resolving any problems related to bilateral trade, including across the border provinces with initiative covering matters such as logistics and customs procedures.

Up to 60 per cent of trade between the partners was conducted across their land border, he said, adding that the resolution of any difficulties at the border crossings would help to secure the US$15 billion trade target in 2020.

The agreements were inked at the sixth meeting of the Joint Trade Committee (JTC) between Thailand and Cambodia.

Sontirat said Thailand would seek to stimulate interest among domestic investors to expand into Cambodia, taking advantage of the incentives for foreign investors.

Thailand ranks in the top nine of countries that have expanded their investments in Cambodia from 1994 to the end of the third quarter of 2017, with an investment value of US$967.89 million. China topped the list with investments of US$10.71 billion for that period. South Korea followed with US$4.88 billion and the UK with US$3.88 billion.

“We believed that the investment from the Thai private sector will expand the trade and investment values between the two sides, achieving double-digit growth a year,” Sontirat said. “On the bilateral trade value, in particular, we expect to see growth of up to 30 per cent a year to reach the US$15 billion in 2020.”