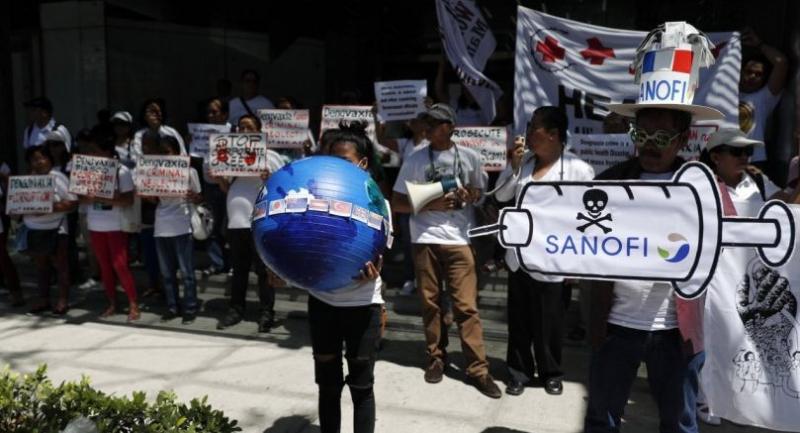 Filipino protesters display placards as they stage a demonstration at the Sanofi Pasteur office to protest the drug company's deal with the government on the controversial anti-dengue vaccine Dengvaxia, in Manila, Philippines, 05 March 2018. /EPA-EFE

A health scare over a pioneering dengue vaccine is partly to blame for a decline in child immunisation and a deadly measles outbreak in the Philippines, a senior health official said Tuesday.

The government has reported four outbreaks of measles, one of the world's leading killers of children, since December, a period coinciding with the row over the dengue vaccine which some parents blamed for child deaths. Philippine Department of Health (DOH) secretary Francisco Duque (R) answers a question during a press conference at the DOH headquarters in Manila on March 6, 2018. // AFP PHOTO

Manila suspended the Dengvaxia vaccine last December and threatened to sue Sanofi shortly after the French pharmaceutical firm disclosed that it could worsen symptoms for people not previously infected by the dengue virus.

This compares to at least 80-85 percent last year, he said.

"We have eradicated measles like 10 years ago but it's coming back due to the low rates of vaccination within the communities," he told reporters, adding this vaccine is given at the age of nine months.

Asked if lower immunisation rates this year were due to the Dengvaxia scare, he said "partly", with insurgencies also blocking delivery of medical services in some southern areas.

"Before, they (children) would come to our health centres for their scheduled vaccines. Now we have to seek them (parents) out and convince them," he added.

"As long as we can control it (measles), the mortalities are very low. But we (also) have like polio for example, diphtheria pertussis, which are more debilitating or more fatal."

Domingo said 17 people contracted measles in a Manila district in January but none of them died. Three died in larger outbreaks in at least two areas on the southern island of Mindanao in December.

Meanwhile, he said a suspected measles outbreak was underway in two cities and five towns on the central island of Negros.

Domingo said the health department was actively seeking out children who had missed out on immunisation to prevent the further spread of measles.

"We always tell them (parents) these are tried and tested vaccines and they save millions of lives every year around the world," he said.

The Philippine health department injected some 870,000 people, all but 33,000 of them schoolchildren, with Dengvaxia in four of the country's most populous regions in 2016 and 2017.

Sanofi's belated disclosure sparked a nationwide panic, with some parents alleging the vaccine killed their children.

The government suspended the drug and ordered an inquiry which so far failed to establish a link between the vaccine and 14 child deaths including three from dengue.

A total of 49 children who were given the vaccine had now died, nine of them from dengue, Domingo said. The underlying cause of these later deaths was still being investigated.