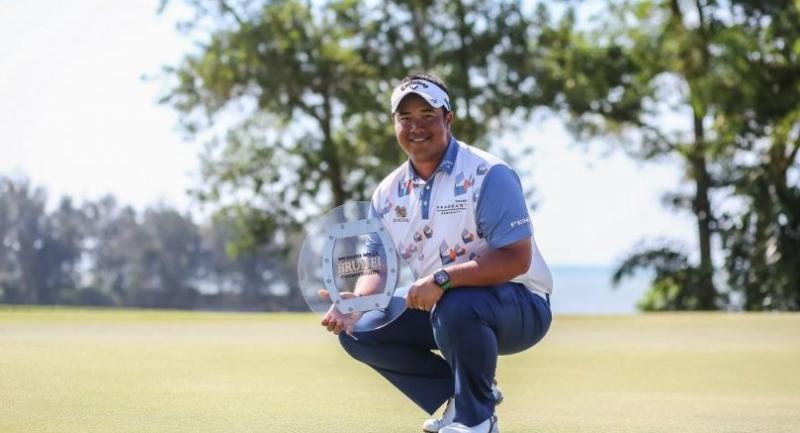 Bandar Seri Begawan - Thailand’s top golfer, Kiradech Aphibarnrat, cruised to a six-shot victory by firing a final round three-under-par 68 at the US$60,000 Richard Mille Brunei Championships on Saturday.

Kiradech ended his campaign on 23-under-par 261 to win by six shots over John Catlin of the United States, who returned with a superb 65 to finish in second place.

The 28-year-old Kiradech got off to a solid start by making the turn in 34 before adding three birdies against two bogeys on his homeward nine to claim his second title in 2018 following his victory at the ISPS HANDA World Super 6 Perth last month.

“On the back nine I lost my concentration a little bit. My target was to try and beat the course record of 61 and I was thinking too much. My putts were not dropping in the first five holes on the back nine. Hole 12 was a bad hole for me, where I hit a bad drive to the right and had to chip it out and then didn’t save par,” said Kiradech.

“Everyone was surprised when I took my driver out at the 15th because it only needed to be a three-iron off the tee but I had nothing to lose and I had a seven-stroke lead so I just wanted to change it up and I made a birdie on that hole.”

A huge crowd gathered to watch the popular Thai march to victory.

“It surprised me that so many people came out to watch despite the hot and humid weather. It feels fantastic to win again, I didn’t have too much pressure on me today, I was just enjoying my round and playing my own game,” said Kiradech.

“The level of competition on the ADT has definitely improved from what I have seen. I just had a really good week, which explains the big gap.

“But there’s so many top players behind me and I really believe that the ADT gives all these up and coming golfers the opportunity to make it to the bigger tour and I hope to see these guys up there soon.”

With two wins in the past two months, Kiradech will be heading back to the US next week to play in the WGC-Dell Technologies Matchplay event before heading to the Masters.

“I wanted to use this to gain confidence before I head back. I have been playing great golf over the last four weeks. I am hitting it well and my mind is in the right place so I am going back to the US in great form,” he added.

Catlin, a two-time ADT winner, gave his best to mount a title charge as he returned with a 65 highlighted by six birdies on his flawless scorecard. Itthipat Buranatanyarat of Thailand took third place  following a 71 while Indonesia’s Danny Masrin shared fourth  with Singapore’s Quincy Quek on 271s.

“I had so many lip-outs today it could have been something really special. I hit a couple of shots between five feet and made those and made a 20-footer on hole 15. Kiradech played unbelievable, I knew I didn’t have a chance to catch him so I was just aiming for second place. It’s been a good week and I’m just going to stay on top of my game before my next event in Indonesia.” said Catlin.

Kiradech took home a winner’s cheque of US$10,500 and received nine Official World Golf Ranking (OWGR) points which will bring him closer to his goal of finishing inside  the top-30 at the end of 2018.

The leading five players on the final ADT Order of Merit at the end of the season will earn playing rights on the region’s premier Tour for 2019.