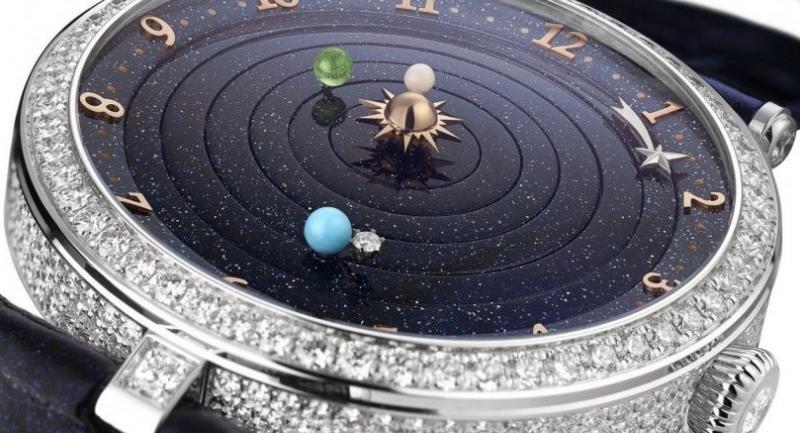 DREAMS reach to the stars in the magnificent Lady Arpels Planetarium, one of several new wristwatches that Van Cleef and Arpels unveiled in Switzerland in January. They’re part of the “Poetry of Time” exhibition now touring Asia, starting in Thailand.

It’s on view in the Emporium’s first-floor gallery through Sunday. The Lady Arpels Planetarium is a re-styling of the Midnight Planetarium that Van Cleef and Arpels produced four years ago.

Distinguished both by refined aesthetics and an automatic movement developed exclusively for the company, the lady’s watch illustrates the Sun, Mercury, Venus, Earth and the Moon, each moving at its actual speed. Mercury “orbits” the dial in 88 days, Venus in 224 and Earth in 365. Meanwhile the Moon orbits around the Earth in 29.5 days.

Taken altogether, the heavenly bodies perform a celestial ballet on the dial, day after day. The 38mm case is set with diamonds in the bezel and sides and houses a movement redesigned for this smaller size, with an exclusive module developed in collaboration with Christiaan van der Klaauw.

The dial enriches the planetary spectacle with a shooting star in rhodium-plated gold, showing the time with poetic grace.

On the back of the watch, two apertures display the day, month and year, all surrounded by an enchanting decor.

Two bracelets are available to suit any occasion. The blue-glitter alligator strap matches the dial and the bracelet is entirely set with diamonds for a high-jewellery design.

The brand took great care in selecting and working with the traditional materials used in making jewellery and watches.

The planets of differing volumes rotate around a Sun made of pink gold, gleaming in the centre of the dial. A pink mother-of-pearl Mercury and a turquoise Earth were meticulously hand-cut in spherical shapes, while Venus is portrayed with a green enamel bead fashioned in the Van Cleef and Arpels enamel workshop.

The familiar glow of the Moon comes to life with a brilliant-cut diamond, contrasting with the midnight-blue background.

Evoking the depth of the cosmos, seven aventurine discs are placed in concentric circles within the dial, several rotating individually with the watch movement. The back of the case displays the same shades.

Also in the exhibition is the original Midnight Planetarium from 2014, in which the ambition of reducing the scale of the heavens to the dimensions of a wristwatch was realised. It’s a miniature representation of the movement of six planets around the Sun and their relative position at any given time. Earth, Mercury, Venus, Mars, Jupiter and Saturn are set in motion by a self-winding mechanical movement of great complexity.

The Midnight Zodiac Lumineux features the 12 signs of the western zodiac in 12 luminous dials. Finely sculpted in white gold, the signs stand out against a background of blue-glitter enamel, evoking the heavenly vault. Within each constellation, delicate enamel beads depict several points, shaped by hand and mounted on the dial, some of them light up like real stars.

The Lady Arpels Papillon Automate is enchanting nature comes to life. Equipped with a sophisticated automaton module, it depicts the random fluttering of a butterfly’s wings, moving in tandem with the movements of the wearer. As the hours and minutes flow by on the right, the butterfly beats its wings randomly – one to four times in a row, depending on the power reserve.

The frequency of the movements is also irregular, taking place every two to four minutes when the watch is not being worn and more often when it’s on the wrist.